Good news if you’re a fan of folk music, or enjoyed our previous post Folk Hero Frank Kidson… We’ve just published a new research guide aimed at helping you get the best out of the large collection of materials held at Leeds Central Library relating to the city’s esteemed music historian, Frank Kidson (1855-1926).

From his notable compendiums of songs, singing games and broadsides, to articles he contributed to newspapers and other volumes, there’s plenty to explore by the author himself, including some of his own sketchbooks and notes. As well as these, you’ll find biographical pieces by those who knew him, including his niece, Ethel, who continued editing and publishing his work after his death.

Pop into the Local and Family History Library to pick up a copy of the guide, or download it as a PDF by clicking on the image below. 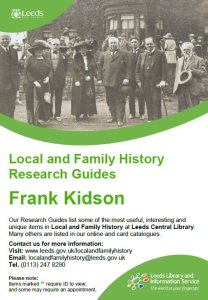