You may recall that, during our 2016 Library Fest programme, we trialled a new event: Speed-date our Library Treasures. Put simply, this was an opportunity for the public to engage with a wide range of some of our most interesting and unique stock items, all curated by passionate Librarians, and in a decidedly non-traditional library environment (i.e. a pub).

We’re delighted to report that – such was the success of #speeddatetreasures – we took little hesitation in opting to run the whole thing again this year, as part of our recent 2017 Library Fest series. So, for those of you who were unable to make it, here is a brief run-through of the items we had out on show during the two sessions: 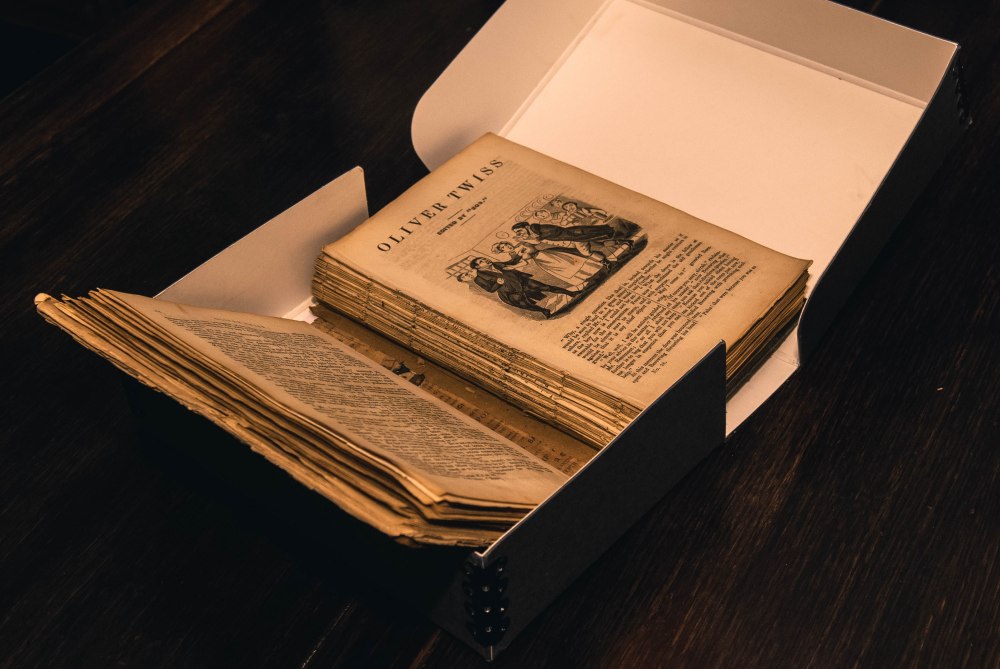 Rhian, our Collections Manager, spoke about this fascinating 1830s edition of Dickens’ Oliver Twist, an edition with, as it were, “a twist”: this copy is, in fact, a pirated, plagiarised and parodic version of that well-known text, adapted by one Thomas Peckett Prest for a working-class audience hungry for cultural forms suited to their tastes. You can read more about Oliver Twiss on a previous blog post.

This political cartoon from the 1880 Parliamentary Election was introduced by Antony from our Local and Family History department. Depicting the five candidates for the Leeds seat, the cartoon forms part of a wider collection of over 200-similar images. Antony has previously given a talk on this collection, and you can see an edited version of his lecture notes and slides elsewhere on this blog.

Phil, who works across the Local and Family History and Information and Research departments, led our ‘dates’ through the history and significance of a book that is – by any measure – one of the Treasures we are most honoured to hold in the Central Library: Willie Riley’s manuscript edition of his 1912 bestselling-novel Windyridge. Riley, from Bradford, based his story of the young artist and photographer, Grace Holden, on the area around Guiseley.

Phil is a familiar figure in the local history community, where he gives regular talks on the Central Library’s Treasures collections; in particular, a Cistercian Missal that most likely belonged to the library at Kirkstall Abbey.

The Book of Nouns 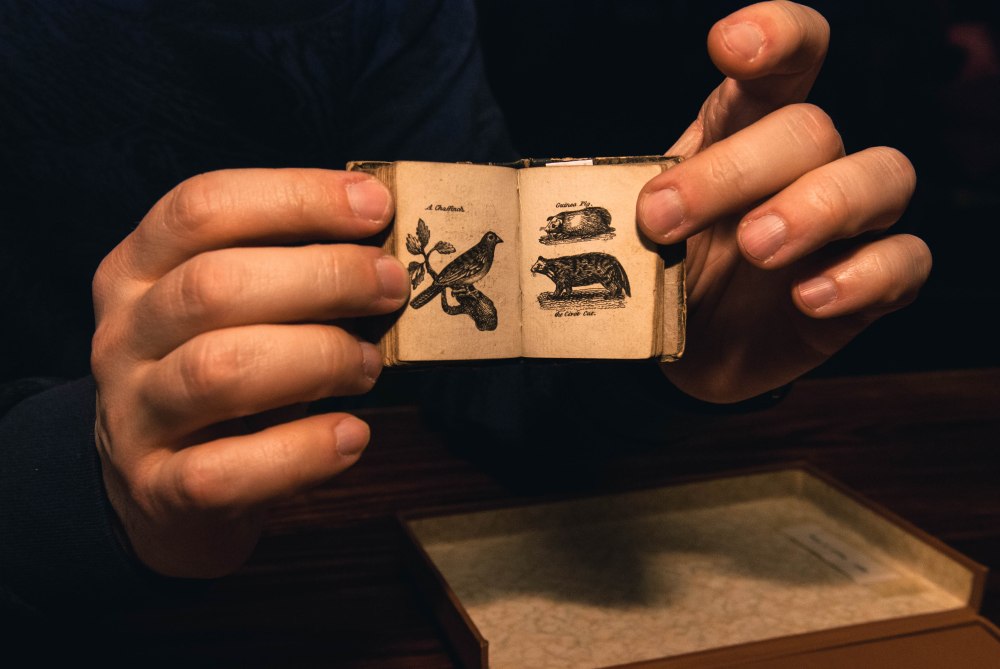 This tiny book bears more cultural, historical and intellectual weight than you might expect from its compact appearance. Ross, Librarian-Manager for the Local and Family History department, introduced the  The Book of Nouns and has this to say:

The Book of Nouns, or Things which may be seen is a miniature children’s book dating back to the very early 19th Century.

It measures only 6cm by 4.5cm and is about 1cm thick. Our copy was printed in 1802 by Darton and Harvey of 55 Gracechurch Street, London, but a note inside suggests the book was first published the year before. Its tiny pages alternate between short lists of things (‘a Mace, a Nest, Oaks, a Pink, a Quill, a Rake’) and beautiful engravings – not always of the same items.

So, for instance, you’ll find a turkey, a jackal, a well, a rook and an archer among the 64 images inside. Very occasionally, there’s also a brief fact, such as ‘The otter lives on fish, roots & plants’ but, for the most part, it’s up to you to guess why each item was included.

It’s not a dictionary (although from page 56 onwards it does suddenly decide to start following the order of the alphabet) and not everything inside is named. In fact, it took another old book to explain for us the way in which it’s intended to be used. ‘The use of this little trifle is to connect reading with intelligence,’ explains A Catalogue of Books, for the Amusement and Instruction of Youth (1801): ‘When each name is read, the thing it signifies should be shewn’.

Karen, also from our Local and Family History department, brought along this fascinating collection of stories, songs and proclamations, gathered as it was by the eminent Leeds-folklorist Frank Kidson. Karen has this to say about this selection:

I chose for my Speed Dating item ‘Leeds Printed Broadsides’ which were collected by Frank Kidson, Leeds author, artist and folk song collector. Broadsides were a form of street literature, printed on one side only, and produced in large numbers on the early printing presses, and sold for as little as one old penny. They contained accounts of events, news, proclamations and songs or rhymes, and were sold in the streets and at fairs and other gatherings.

The special aspect of this collection is that they are all original prints from Leeds printing firms, such as Barr, Andrews, and Buchan, and some also have notes in Kidson’s own hand. He was about as much of a Leeds man as it possible to be, having been born in Centenary Street, just prior to the building of Leeds Municipal Buildings and Library, and on the site of what is now Victoria Gardens. 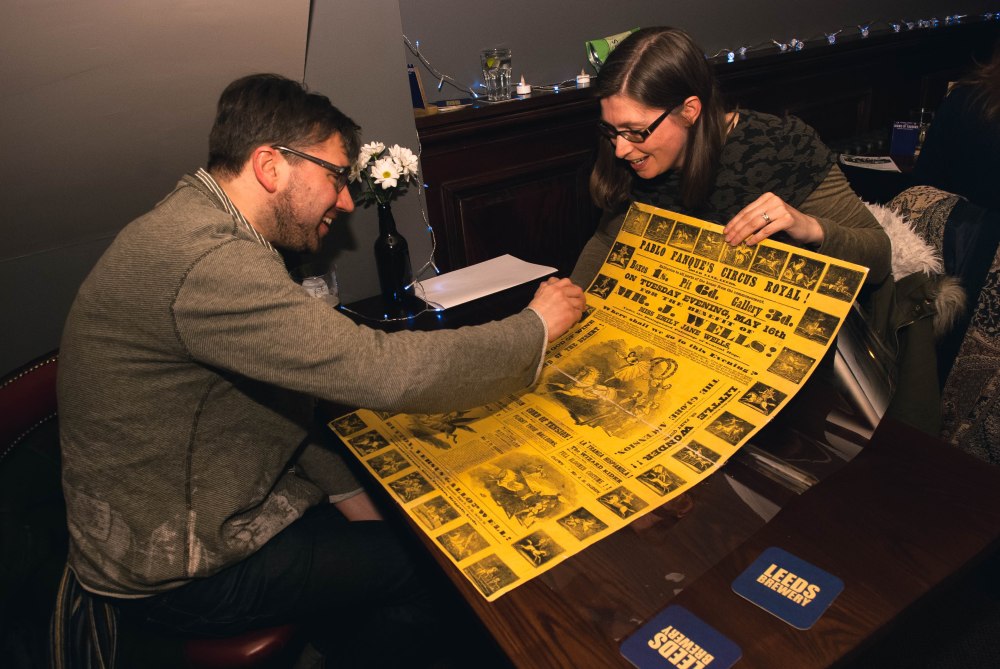 Just one from our large collection of Leeds theatre playbills and programmes, this particular selection, selected by Helen from our Local and Family History department, advertises the appearance in Leeds of a man made (even more) famous by The Beatles: Pablo Fanque. The story of Pablo’s time in Leeds is told in several previous blog posts.

The magazine was a reaction to – and rebellion against – traditional women’s magazines, which covered topics such as beauty, domesticity and romance. Spare Rib highlighted and protested issues previously un-touched by women’s magazines including sex, racism, eating disorders and women’s rights in foreign countries; along with passionate reader’s letters, culture reviews and listings.

Spare Rib is a treasure as it is an important piece of recent social and cultural history, inspiring a new generation of modern feminism, while also highlighting darker issues in modern society; issues mirrored in these magazines from thirty-years ago. 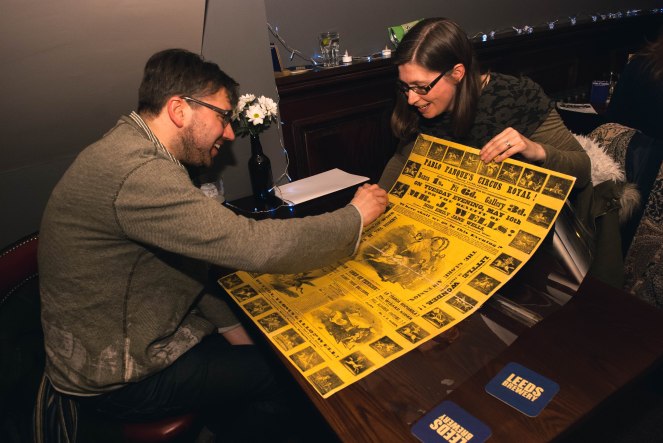 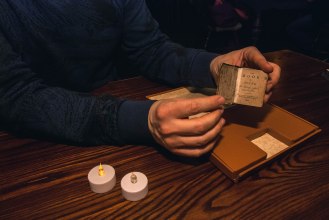 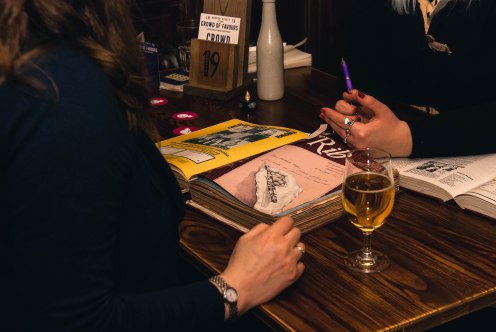 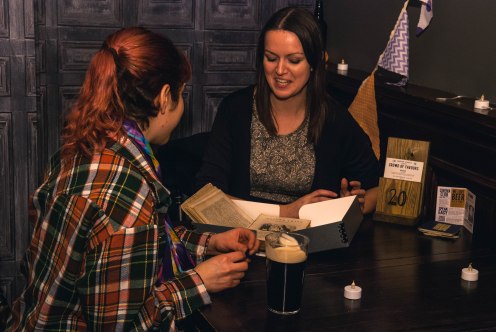 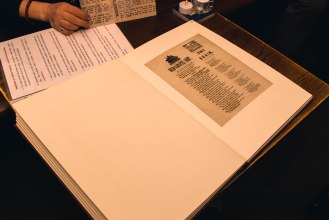 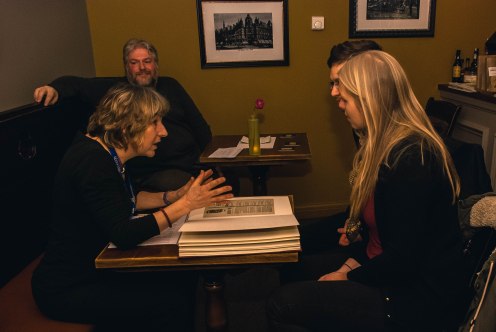 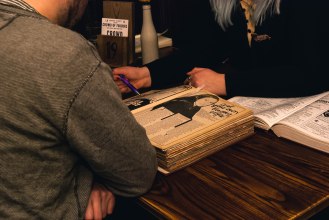 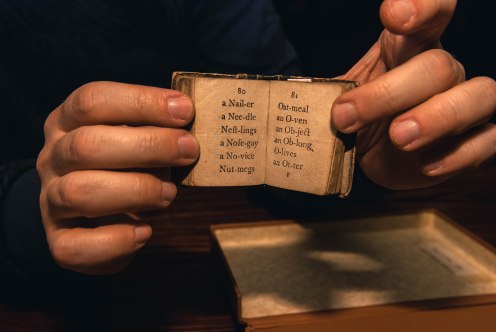 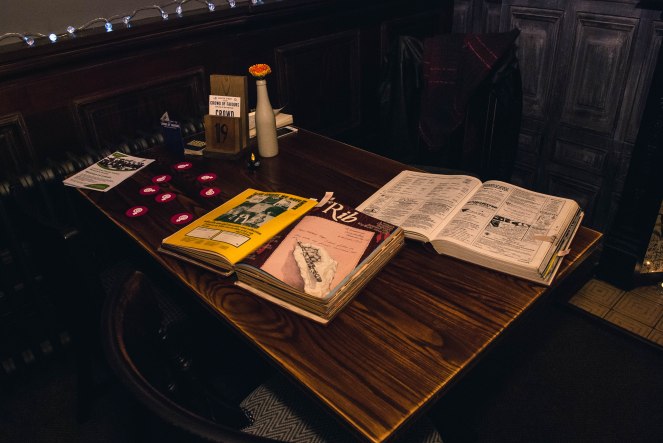 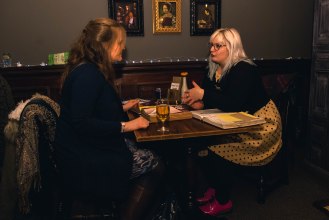 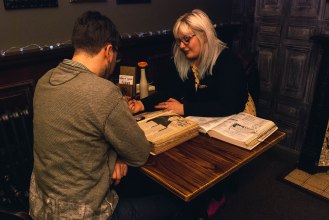 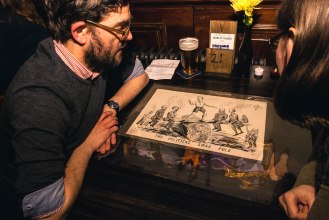 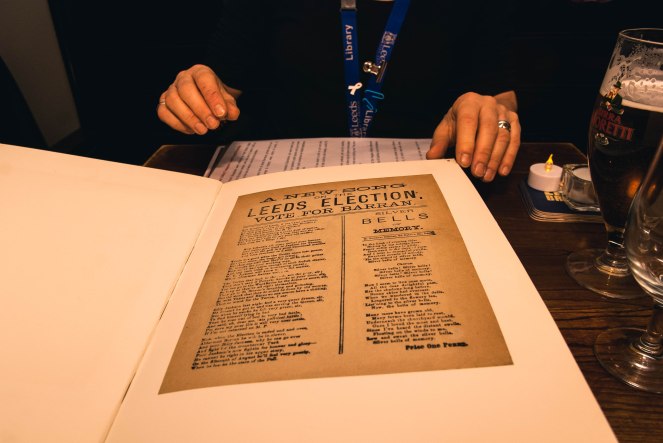 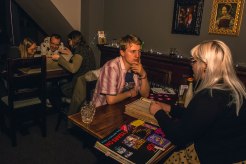 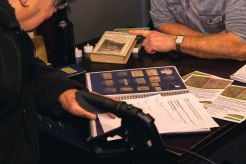 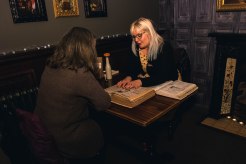 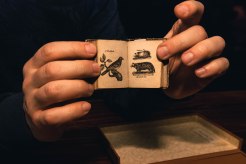