Antony Ramm, part of the Librarian team in the Local and Family History department reports on a fascinating talk recently given at the Central Library. 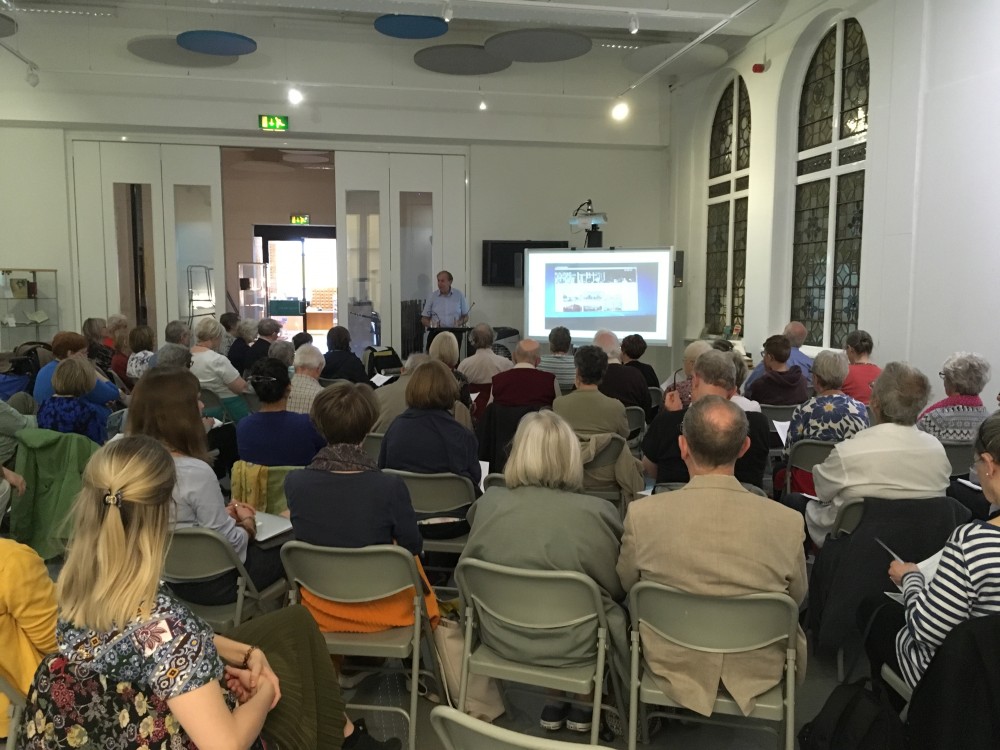 Over 50 people attended the latest in our Lunchtime Talk series, when we welcomed Professor Laurence Brockliss of the University of Oxford, who introduced our audience to a major research project. This is Victorian Professions: an attempt to analyse the origins and fates of around 150 middle-class families in the 19th and early 20th-centuries across nine towns. Taking the 1851 census as their starting point, the researchers followed the fortunes of these families through to the Edwardian period, in an attempt to assess how the success and wealth of one generation is carried through to their descendants. With Leeds being one of the towns included in the study, we were delighted – and intrigued – to hear a snapshot of the project and our region’s inhabitants in the Victorian era (albeit with the slightly alarming news that Leeds was only selected to stand-in as an example of a 19th-century industrial town after the first choice – Manchester – was dropped owing to the poor condition of its 1851 census returns).

Several early conclusions have been drawn by Professor Brockliss and his team, which were elucidated in our talk: most of the individuals analysed in this study were born in Yorkshire or Leeds itself and the vast majority had their origins in the commercial and artisan sectors so prevalent in those regions. The educational backgrounds of the cohort was also of interest (as it was for another recent project supported by the Library Service): very few attended public or Grammar schools – only four of the thirty-eight born in Leeds attended Leeds Grammar School, for instance – with most gaining their education in the kinds of academies exemplified by Richard Kemplay’s Literary and Commercial Academy (Kemplay’s son, Christopher, was also part of the project cohort). 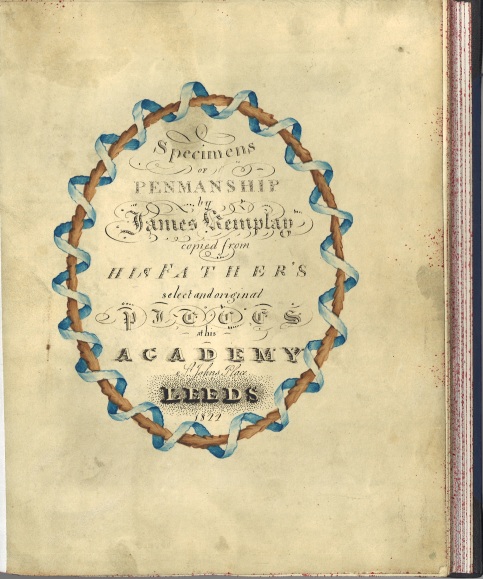 Penmanship book from Kemplay’s Academy, part of the Collections at Leeds Central Library 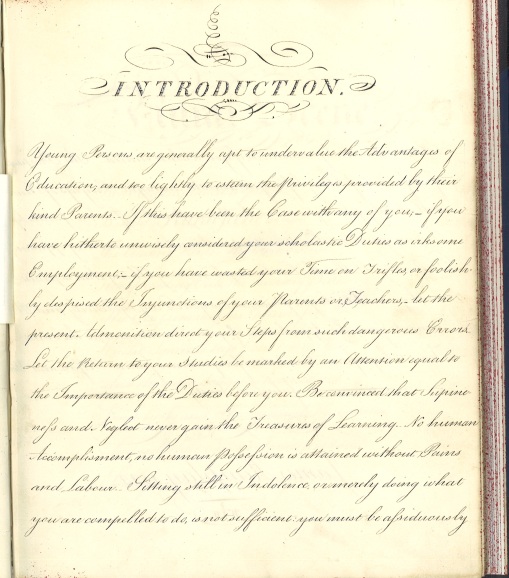 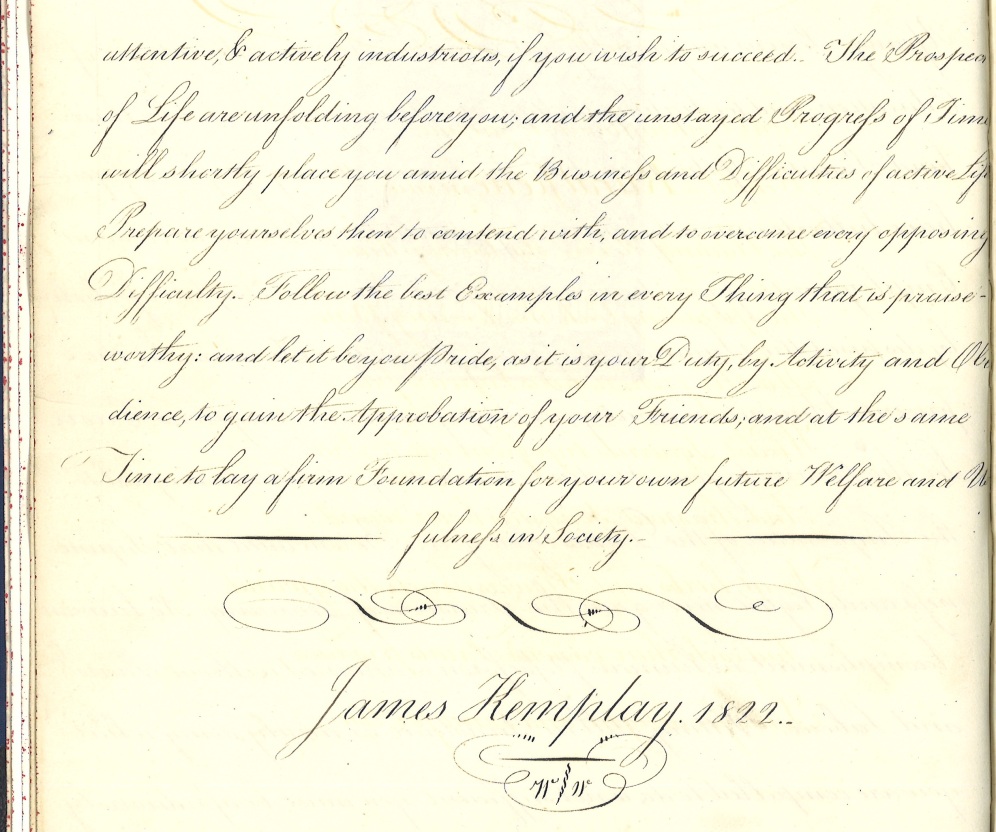 Even after they had achieved middle-class security and a degree of wealth, these families tended to stay in the Leeds or wider Yorkshire region, until death – their children educated in much the same way as themselves, and intended to take over what were, in many case, family businesses and trades. Even that classification – ‘wealth’ – proved surprisingly misleading, as only a small percentage – 36% – had enough money at their death to go through probate. Servants were few among this middle-class, and the involvement of this elite in the affairs of their town limited to churchgoing and membership of various societies.

All of which led to the slightly counter-intuitive conclusion from Professor Brockliss that the Victorian middle-classes were largely – at least in Leeds – very ineffective at ensuring their wealth was maintained through the generations; most of the 150 families have lapsed into obscurity since their brief moment in the sun.

You can read more about the project’s aims on its website and the research team’s conclusions will be available in a forthcoming publication. Professor Brockliss and his colleagues are keen to hear from anyone who can contribute to their material through the provision of papers and other ephemera handed-down to the descendants of those 150 families. Such content will enable a deeper and more effective study of this cohort and help to answer exactly why these families were unable to maintain their wealth beyond the first few generations.

All of which is, in itself, of sufficient interest to this blog and its readers to merit inclusion on its own terms. But the main reason for its writing-up here is twofold: first, the methodology – a superb example of how to merge the tools of genealogy and family history research with a rigorous, scholarly analysis and framing in a particular moment in history; and, most importantly, the project first came to our attention when a member of the research team, Edward Gillin, contacted us about viewing a specific – and most likely little-known – item held at the Central Library: the papers of the Leeds Conversation Club.

After visiting, Edward was kind enough to write up some brief notes outlining what he discovered in that collection of material:

Leeds Conversation Club was established in 1849 with a mandate to promote conversation among its members on all subjects, except for those politically and religiously controversial.  Held within the library are several volumes relating to this society, including club minutes and a beautiful book with photographs of all members of the club from its beginning in 1849 until its closure in 1944. Membership was limited to 12 at any one moment in time. Meetings were held at the homes of members, so with 12, a different venue could be found for each monthly gathering.  The club ceased meeting in 1944 due to the inconveniences of travel imposed by the War.

In my time at the Central library I have been focusing on the first 10 years of its existence.  Of the original 12 members, 3 are included in our project on the professionals in the nineteenth century.  Namely the MP for Leeds Edward Baines (Junior), the publisher and amateur astronomer Christopher Kemplay, and the minister for the Unitarian Mill Hill Chapel, Charles Wicksteed. Through these three individuals, who were selected at random from our cohort, it becomes clear that the Leeds Conversation Club was at the centre of Leeds’ political, religious, scientific, and social life during the mid-nineteenth century.

As a rapidly growing industrial city, the professional classes within Leeds were becoming increasingly active within the social life of the town. The papers held at the library are useful as they show the topics which were considered of greatest urgency and interest for the city’s elites. For example, in September 1849 the club debated the coming Great Exhibition of 1851 and questioned if it should be “British or Universal?” At Kemplay’s house in June 1850 they examined how far climate influenced the character of humans, while in September 1851 they discussed the effect on prices of the recent discovery of gold in Australia and California. Over the next decade other subjects included the Indian Mutiny of 1857, the Crimean War and Russia’s expansionist policies, Irish emigration to Great Britain, the Pre-Raphaelites, and the potential effect on the United Kingdom of the loss of all her colonies.  Such discussions provide rich insights into the concerns and interests of an important element of Leeds society over the course of almost a century. 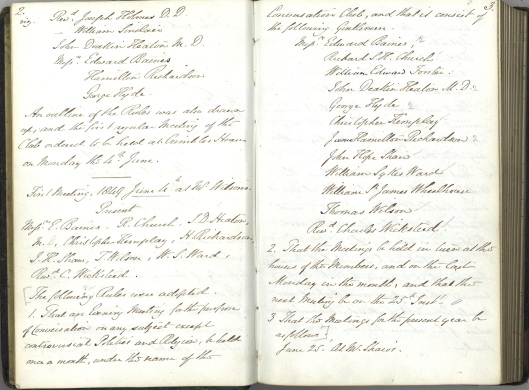 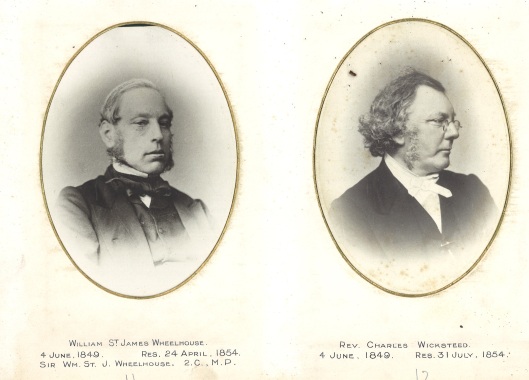 Images taken from the Conversation Club photo album of members 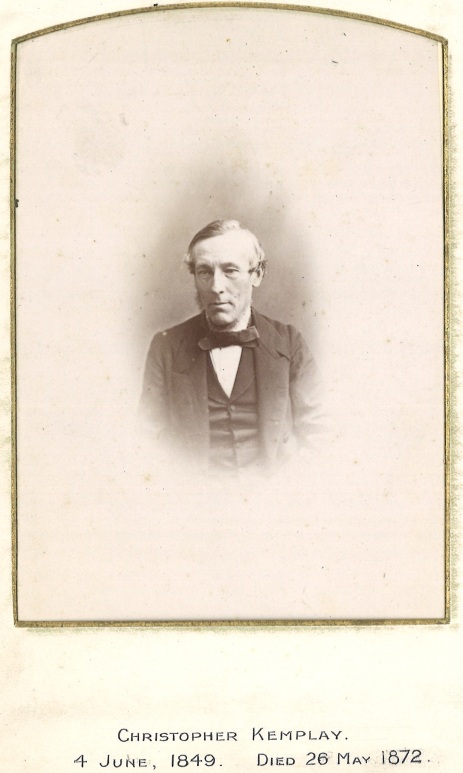 A further image from the photo album

It is clear, then, that the Leeds Conversation Club papers are a significant set of materials in their own right, and we welcome any researchers wishing to make use of them for future projects – or, indeed, anyone simply wanting to view this important part of Leeds’ cultural and social history. To view the collection, please visit the Local and Family History department on the 2nd Floor of the Central Library. Two forms of ID (one with your name and another with your address) and at least 24-hours notice will be required to view items from the Treasures or Collections. Please call 0113 378 5005 for further details and to book an appointment.