You can find details of other forthcoming talks at Leeds Central Library on our Events page.

Dr. Alaric Hall will deliver a talk at Leeds Central Library on the 12th of October, using the Special Collections at the University of Leeds, to explore the scholarships and friendships made by J.R.R. Tolkien during his time (1920-1925) in Leeds, and how these affected his creative writing. Ahead of that talk, Local History Librarian, Antony Ramm, takes a brief look at some traces of Tolkien’s time in Leeds in the Central Library’s own collections…

A Middle English Vocabulary: Designed for use with Sisam’s Fourteenth-century Verse and Prose (1922)

Although started prior to his arrival in Leeds, this book was published in 1922, making it more than likely that Tolkien worked on it during his time in the city.

A New Glossary of the Dialect of the Huddersfield District (1928) – Walter E. Haigh

Tolkien contributed the foreword to his friend Haigh’s book. Although published a few years after Tolkien left Leeds, he had seen and commented on the text as early as 1923. His introduction features  many fascinating remarks on linguistics in the West Riding, including connections between the Huddersfield district dialect, Middle English, and possible links to the composition of Sir Gawain and the Green Knight (an edition of which Tolkien edited during his time at the University of Leeds).

Tolkien and Haigh were both members of the Yorkshire Dialect Society, for which an incomplete set of transactions can be consulted in the Yorkshire Collection of the Local and Family History department. Part XXIV of Volume IV (1923) is especially notable, as it includes an article by another friend and colleague of Tolkien’s, E.V. Gordon, on ‘Scandinavian Influences in Yorkshire Dialects.’ Tolkien is named in a full list of Society members at the rear of the volume.

In that list of Yorkshire Dialect Society members for 1923, Tolkien is given as living at 17, St. Mark’s Terrace in Headingley. We  know, however, that, not long after, he moved to 2 Darnley Road in West Park; while hardly a new fact, there is still a visceral thrill from seeing Tolkien’s name printed in a contemporary trade directory.

You can see further images of the Darnley Road area using our Leodis image archive.

It is cheating slightly to include his fellow fantasy writer, E.R. Eddison, in a blog about Tolkien’s life in Leeds, as there is no evidence that the two ever met during the 1920s, or even that Tolkien was aware of Eddison’s first novel, The Worm Ouroborus, when it was published in 1922*. Tolkien did, however, go on in later years to praise his Adel-born contemporary’s work, describing Eddison as being “the greatest and most convincing writer of ‘invented worlds’ that I have read.”

Leeds Central Library is honoured to hold manuscript editions of several Eddison novels, as well as family papers and other ephemera. You can read more elsewhere on our blog, or contact us at localandfamilyhistory@leeds.gov.uk to arrange a viewing of this invaluable archive. 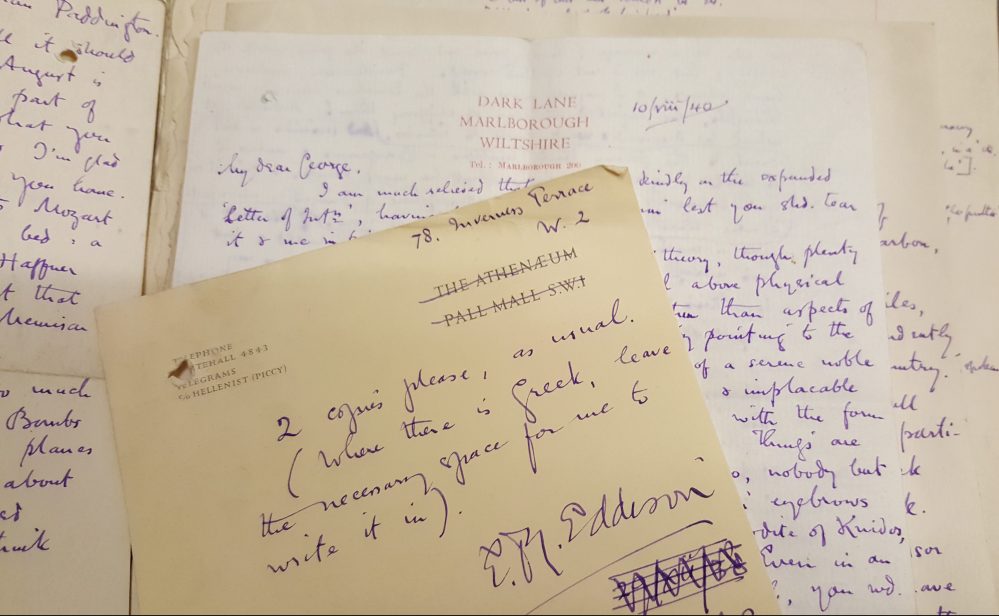 *Interestingly, however, one of Eric’s uncles, Dr. John Eddison, was a member of the Yorkshire Dialect Society around the same time as Tolkien.

The Birth of Middle-Earth

During his time in Leeds, Tolkien contributed at least two poems to The Gryphon, a Leeds student magazine. In these pieces, containing references to Elves and dwarves, dragons and rings, can perhaps be seen the first stirrings of the fantasy world for which he would later find fame.

You can read the full poems in copies of The Gryphon, available in our Local and Family History library.