In 2010 a certain Internet search engine estimated the number of books in the world to be around 129,864,880. I’m guessing in the years since that figure has grown somewhat. So how do we show which ones belong to Leeds Libraries? Well we brand them.
Today it’s a pretty bland process, our name, phone number and web address is printed on the date label and a barcode has allowed us to move on from the days of individual book tabs and brown cardboard library tickets. This wasn’t always the case thought, over the years we have displayed various images and methods to show which books belong to the library and today we will show you a few.

First we have a couple of items we showcased in a previous post.  ‘The Genera and Species of British Butterflies was written by H. Noel Humphreys in 1859 – 25 years before the city centre library first opened. This book was most likely part of the library’s stock during its early years. At this time we made sure that if you used our copy you knew it belonged to us. Every colour plate displays an embossed stamp showing the name of Leeds Public Libraries around the City crest. Whomever wielded the embossing machine was not concerned with avoiding the colour images either, as the stamp dissects the butterflies wing.

In European Butterflies and Moths by W.F Kirby (1889) each of the 61 colour plates is stamped with a small but obvious Leeds Reference Library mark. Why did we permanently mark these beautifully coloured plates? Possibly to discourage theft of the image, hand coloured plates were considered an asset to the book and the stamps would deter people from carefully cutting out the page to use as a print or sell on. The mass produced books of today don’t carry the same level of value for their printed images so the practice is now obsolete.

As early as 1917 it was decided that Leeds should have a specialist Commercial, Science & Technical library covering business and science based subjects as part of its Central Library services. Initially opened in 1918 in the Art Gallery News Room, it moved in 1956 to the modernised Tiled Hall. By the 1990s information became more readily available through CD Rom and online subscriptions and so the library was amalgamated into the second floor Reference Library, however during its tenure on the ground floor it had its own green bookplate to show clearly which department the items belonged to. 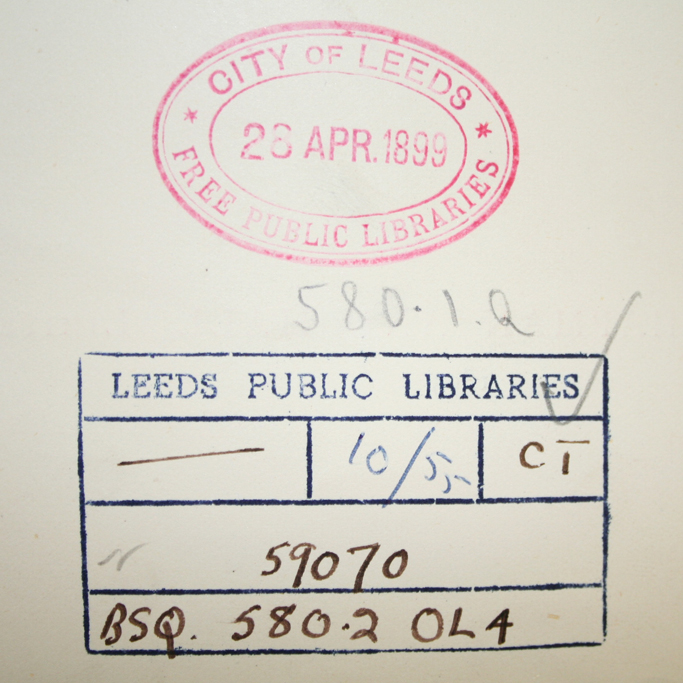 There are two stamps shown above belonging to the same item. The top stamp in red shows the City of Leeds Free Public Libraries 1899 acquisition of Daniel Oliver’s 1893 Vegetable Kingdom. With the help of the Local & Family History library on the second floor we have deciphered the lower accession stamp as follows; we believe the 10/55 note shows the items movement into the newly formed Commercial, Science and Technical Library in October 1955 ahead of the, department’s official reopening the following year. CT is the shorted code used within the Leeds Library service to represent the Commercial & Technical library as it was commonly known. The 59070 is the bibliographic identification number and the BSQ number is the shelf mark, we think the BSQ prefix stands for Basement Stack Quarto to show the location and size of the volume.