Yesterday marked the 200th-anniversary of the Battle of Waterloo. Among the most important military battles of European history, the Waterloo campaign and the wider wars against Napoleon defined the political contours of the next hundred years.

Despite being many hundreds of miles away, the Battle touched the people of Leeds and West Yorkshire as much as anywhere. That was almost entirely due to the presence in Belgium of the 33rd Regiment of Foot, a group of soldiers drawn mainly from the West Yorkshire area. The image below shows an article from the Leeds Mercury about a Hymn that was sung in the nearby Birstall Parish Chruch to commemorate the fallen soldiers a few weeks after June 18th 1815. This article was found using the fantastic website 19th-Century Newspapers, available to all members of the Leeds Library and Information Service. 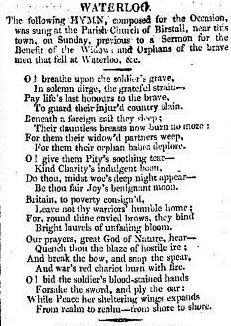 Further evidence for this localised concern by can be seen in another item from our Special Collections – the Reverend Peter Roe’s A Sermon Preached in the Chapel of Harrogate, in Behalf of the Sufferers by the Battle of Waterloo (dated July the 30th, 1815).

There are many stories that could be told of the men who served in that regiment and, indeed, a national campaign is currently underway to encourage people to uncover the tales of their ancestors who fought at Waterloo. If you are interested in searching your own family tree for a long-lost soldier of the 33rd Regiment, pop into our Local and Family History department where staff can advise you on starting your research and the different military records available across genealogical websites like Find My Past and Ancestry (available in all Leeds libraries). One place to start is the Waterloo Medal Roll. The library holds a copy of this volume, which can be browsed by consulting staff. Histories of the 33rd Regiment are also available to consult in the library.

If you want to gain a deeper understanding of the Battle more generally, there are many recently-published books available through the Library service. Additionally, however, together with numerous classic works of scholarship on Napoleon and his times, the Information and Research department is also the custodian for a fascinating selection of treasures from the period – including eyewitness accounts, contemporary reports and histories and military memoirs. You can also read how the government of the day reacted to events on the continent by browsing our collection of Hansard’s Parliamentary Debates.

Some of these items are currently on display outside the department, on the 2nd Floor of the Central Library. Among the most interesting of our treasures is The Battle of Waterloo: Containing the Series of Accounts Published by Authority, British and Foreign. This volume – published the same year as the Battle itself and written anonymously by ‘A Near Observer’ – contains a “variety of authentic and original sources, with relative official documents”, including the descriptions of French and British soldiers, letters to and from the frontline and some frankly astonishing contemporaneous illustrations of the battlefield. One such image can be seen below.

Another similar volume is the Lieutenant G.W. Picton’s The Battle of Waterloo: Or, a General History of the Events Connected with that Important Era. This book is another compendium of information from a wide variety of sources – including the official account of the French military, “miscellaneous anecdotes” and extracts from publications such as the London Gazette. Again, the Piction book contains some incredible illustrations from the very time of the events being described.

The Library also holds a very rare copy of The Life and Opinions of Sir Charles James Napier. As far as we can tell, this particular edition of Sir Charles’ memoirs includes original documents alongside later printed copies of relevant sections from a biography of the General. Other extraordinary details include what appear to be original seals and even some kind of military headgear! This item forms part of the Gascoigne Collection of militaria; if any reader has any information they can provide us as to the provenance of this extraordinary item we would be delighted to hear from them.

Further items available in our collections can be identified through a Waterloo Research Guide we have created. Please contact the library or ask a member of staff to gain access to any of the items listed in that guide.