We’re back causing trouble in city centre shops again this week, squeezing ourselves around an upstairs window display to get an elevated view of one of Leeds’s busiest retail routes, Briggate. 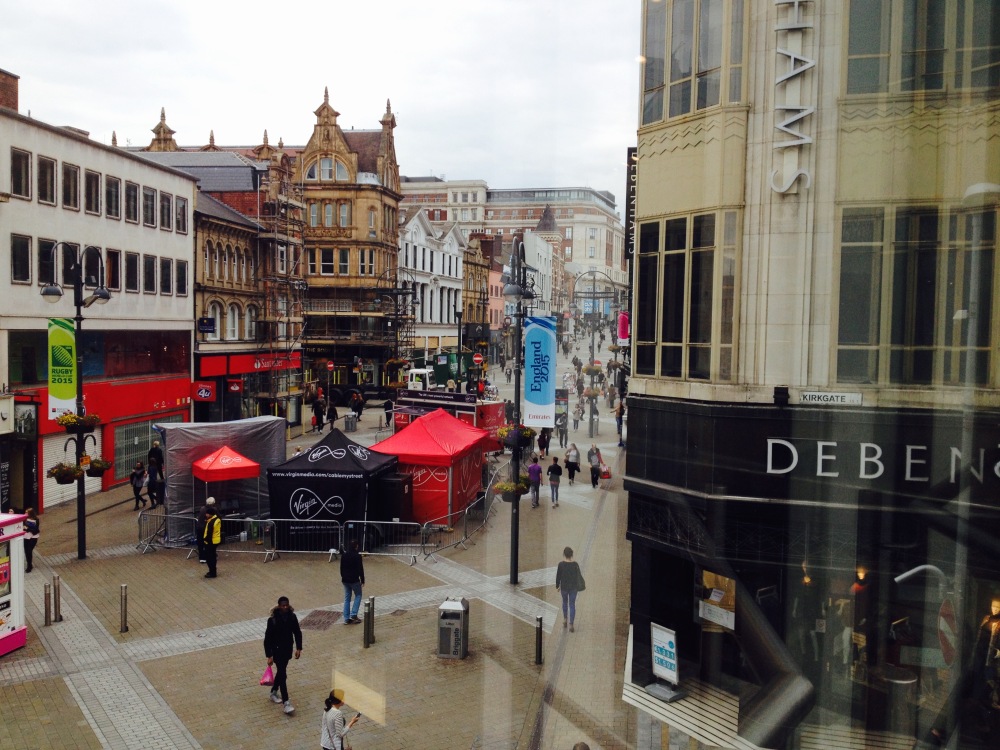 You’ll need to ride the escalator or lift to the first floor of clothes shop Zara to get a gander from this angle, heading for the window in the far corner of the menswear department. (If anyone accuses you of trying to sidle behind the counter at this point, just remain very still and pretend to be a mannequin.) The trip is especially worth making on a Saturday afternoon, when the throng of shoppers at ground level becomes a mesmerising flow of bobbing heads when seen from above.

Our photograph reflects a window of opportunity on a less busy weekday (and, yes, there’s plenty of reflecting visible on the window in the image – sorry). As well as appreciating the surprising slope of the street from this angle, you’ll find it’s the often ornate upper levels of the surrounding buildings that stand out, rather than the shops beneath. Take a look at the next photo, from 1909, and see if you can work out which buildings it shows. 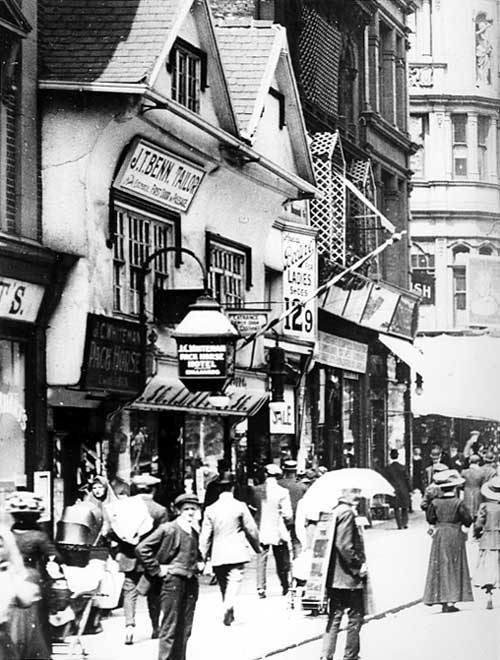 The clue of course is the Pack Horse Inn, the entrance to which is also visible in our more modern photograph (on the extreme left). The entrance to Pack Horse Yard is at number 56 Briggate, one of the oldest buildings in Leeds when the 1909 picture was taken, but which stands no longer. You can still visit the pub, however, which dates back to 1615 and has an original Templar Cross affixed to the wall beneath its gables – a sign that the building once belonged to the Knights Templar.

The entranceway itself is one of the city’s ‘low ins’. This is a 19th Century name for the various doorway-sized entrances between the shops and businesses of Leeds, which lead to a network of passageways and yards behind. Some locals believe that, over time, the expression ‘low in’ gave rise to the term ‘Loiner’, referring to a resident of Leeds. Many of these entrances remain open today and, if you decide to explore them, you’ll discover unusually-named yards, a handful of hidden shops, and more of the city centre’s oldest pubs.