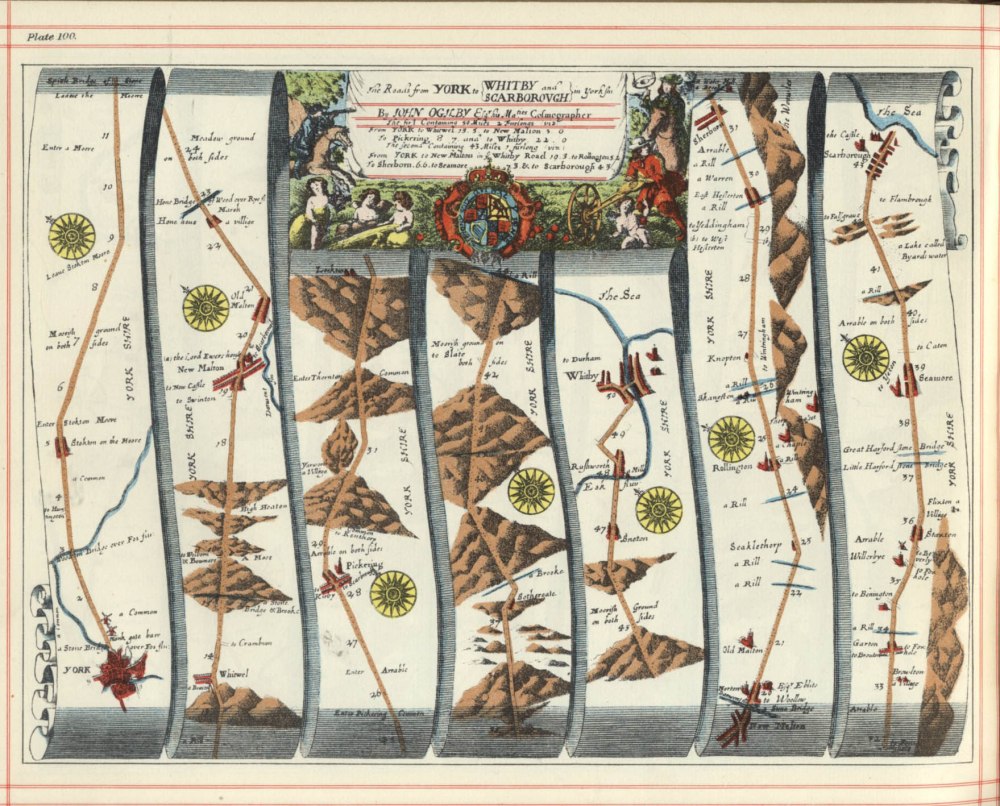 Among the many maps in Leeds Libraries’ collection is John Ogilby’s Britannia Depicta, published in 1675, a landmark in the mapping of England and Wales, and the first national road atlas of any country in Western Europe. It was a publication that would bring about a change in the character and use of maps, and bringing to prominence the ‘”road books” intended for use by the traveller. A few had been published previously, but Britannia was the first to give such a degree of detail on the countryside through which the roads passed.

John Ogilby (November 1600–4 September 1676) was born in Killemeare (Kirriemuir), near Edinburgh, the son of a wealthy Scottish gentleman, and the family moved to London when Ogilby was still a child. However, when his father was imprisoned for debt, Ogilby had to go out selling trinkets to make a living. He invested his savings in a lottery, had the good luck to win a minor prize, and paid off his father’s debts. He spent some time as a dancing master and theatre owner before becoming a bookseller and printer. He was also a successful translator, noted for publishing his work in handsome illustrated editions.

By 1674 Ogilby was appointed “His Majesty’s Cosmographer and Geographic Printer”, and was one of four men appointed to prepare a detailed plan of the area destroyed by the Great Fire of London, published in 1677, a year after Ogilby’s death. 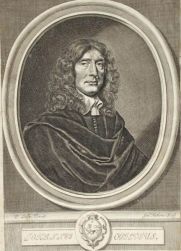 Ogilby had the idea to create a road book in pictorial form, with measurements of all distances, notes of branch roads and junctions, together with features of interest along the road. His scheme was approved by Charles II, and in preparation for the publication, seventy-three roads were surveyed and accurately measured. All the measurements were carried out with a road wheel, (also sometimes called a way-wiser, or ‘Wheel Dimensurator’), a device resembling the front wheel of a bicycle in its’ forks, with the wheel geared to a comptometer – a type of mechanical calculator – so as the surveyor pushed the wheel in front of him, the distances were displayed on a dial. The illustration below is an example of type of instrument Ogilby’s surveyors would have used, and modern versions are still used today. The symbol of the measuring wheel features throughout the maps, and several of the illustrations on the titles depict surveyors at work with the measuring wheel:

Ogilby used the Statute Mile (5280ft/ 1760 yards), introduced by Act of Parliament in 1593, but not generally used until much later, with the old English Customary Mile still being used on milestones. Another innovation was Ogilby’s scale of one inch to the mile (1/63360). These are marked and numbered on each map, the miles further being divided into furlongs. The information was set out in strip maps and engraved on 100 folio plates, accompanied by a double-sided page of text giving additional advice for the map’s use.

Each Sheet covered about seventy miles, and has a title, as shown above, also giving distances between the important towns. The plates were divided into vertical strips, to look like a continuous spiral flattened out. At major changes of direction, there is a compass dial drawn, showing the changing orientation of the map, so North would not necessarily be at the top, as is the custom with most of today’s maps.

Additionally, the compass bearing of major local landmarks such as windmills church towers and large houses was noted, so an out-rider could ride to the landmark and take a triangulation bearing. This is also shown on the title piece above.

The strip map is occasionally used today, a notable example being the hand drawn maps of Alfred Wainwright, in his Pictorial Guides to the Lakeland Fells.

Ogilby’s plates show towns and villages, bridges, distances, destination of side roads, and some of the larger natural features are named. The surveyors noted if the roads were enclosed by walls of hedges, or open, local landmarks were also noted, along with inns, bridges(even noting the material of construction), fords, and sometimes the cultivation of the fields on either side of the road. Hills were drawn on the maps to show the direction in which they were inclined, and their relative steepness. The extracts below note “a Rill” (a small stream or shallow drainage channel), “a Warren” (network of rabbit borrows), arable fields, and “Moorish ground on both sides”.

The details on the plates were so clear and precise that an engraver could draft any of them onto an existing map.

Ogilby died some time after the map’s publication, in 1676, and was buried at St. Brides, one of Sir Christopher Wren’s new London churches.

Ogilby’s Britannia Depicta  provides an interesting record of the countryside of England at the time, and stands apart from other maps of the time. The maps were printed in relatively large numbers for the time, and prints are still available, with originals held in libraries for consultation.

Editions of Britannia Depicta from 1720, 1753 and 1764 are held by the Information & Research Library, and Local & Family History hold prints of individual sheets covering roads in Yorkshire. 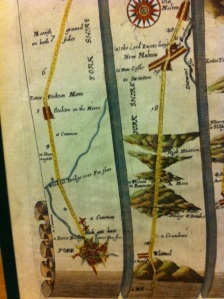 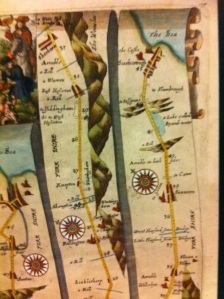