Tomorrow will mark a century since a nationally significant, but oddly little-known, event in the history of Leeds: the 1917 Peace Convention at the Coliseum. This “saw 3,500 people from across Britain gather at the Leeds Coliseum (now the O2 Academy) in solidarity with the February Revolution which had overthrown the brutal Tsarist autocracy in Russia. The Convention voted to hail the inspiration of the Russian Revolution, defend civil liberties, call for an end to the First World War and vote to set up Workers’ and Soldiers’ Councils in Britain in solidarity with the Soviets being formed in revolutionary Russia.” Present on the day, among others, were Bertrand Russell, Ramsay MacDonald, Sylvia Pankhurst, Tom Mann, Philip Snowden, Charlotte Despard, Ernest Bevin, Dora Montefiore and Willie Gallacher.

Different people, of course, took very different views of this gathering’s aims and intentions: a split which can be seen quite clearly in these contrasting reports from the Yorkshire Evening Post and the Leeds Mercury respectively.

Of particular note, in the Post article, are the descriptions of the Convention attendees: “You looked around the sea of faces, and hardly one of them was normal…[a] collection of all the fads and frenzies and fanaticisms, all the disordered minds and discontented souls – the intellectual and spiritual wreckage of a strenuous age.” The reactions of some local Hotel owners are also worth highlighting:

But, rather than retelling any further the story of that gathering, this blog shall focus on the slightly wider – and yet also narrower – picture: a snapshot of Leeds on that same weekend, one-hundred years ago, derived from newspaper articles and advertisements. Readers interested in finding out more about the Convention itself are directed toward a recent book (copies of which are available to buy or loan in the Central Library) and a fascinating series of talks and workshops taking place tomorrow (the quote in the first paragraph of this article is taken from that event’s website).

So, Leeds on that weekend of June 3, 1917: in short, a mixture of the historically-memorable and the mundane. As well as the Peace Covfefe, Leeds – perhaps not coincidentally, in the tumult of War and its attendant social upheaval – saw a series of violent clashes between English and Jewish youths:

Not all were caught up in those twin dramas, however, with leisure –  especially consumer-goods and, in particular, tools to aid efficient home keeping – grabbing much of the focus on the Monday following June 3:

Shopping, principally for food, was another theme. Notable here was the apparent hope that the War would “teach the English housewife to cook” and also enable her to learn “the art of shopping”. Gender, and the socially-approved division of roles (into what we might call ‘girl jobs’ and ‘boy jobs’) seems a clear concern of the time (we might also think of the earlier pejorative description of some Convention attendees as “men [who] wore their hair long…[o]r wore ties as big as sashes.”)

This is made even clearer in this advert, which frames the War in the context of “strength and manly power”: “Courage, Ambition, and Energy”; in the process making assumptions about what ‘masculinity’ should mean, just as the earlier pieces made assumptions about the preferred ways of living for women (shopping, keeping a good home):

That is to say: the advert suggests a deep anxiety about gender roles – and such ideas were also causing trouble for some newspaper readers: 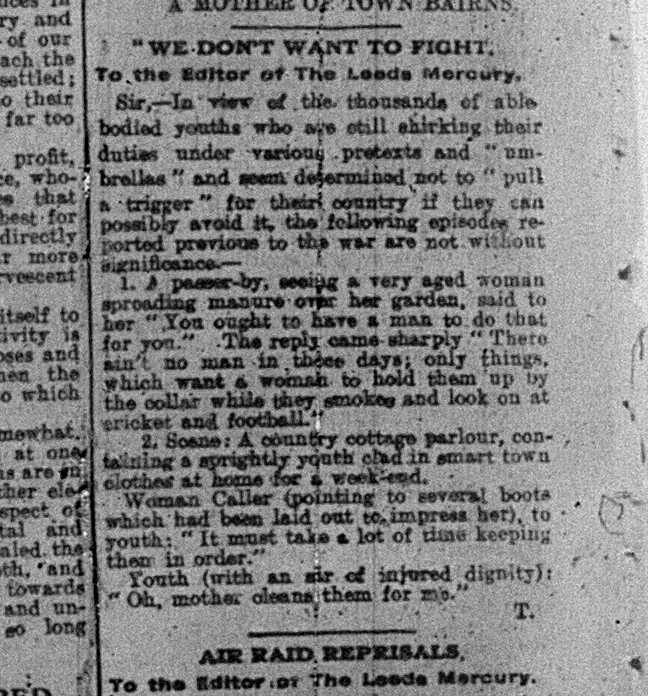 Even if others spotted the longer-term changes to gender taking place in society as a direct result of the War (changes which were, no doubt, the catalyst for those anxieties):

These social changes  are also clearly indicated in this piece showing the shifts in employment patterns for one Leeds business:

Despite (or, perhaps, because of) those social changes, the mundane realities and fantasies of daily life continued: 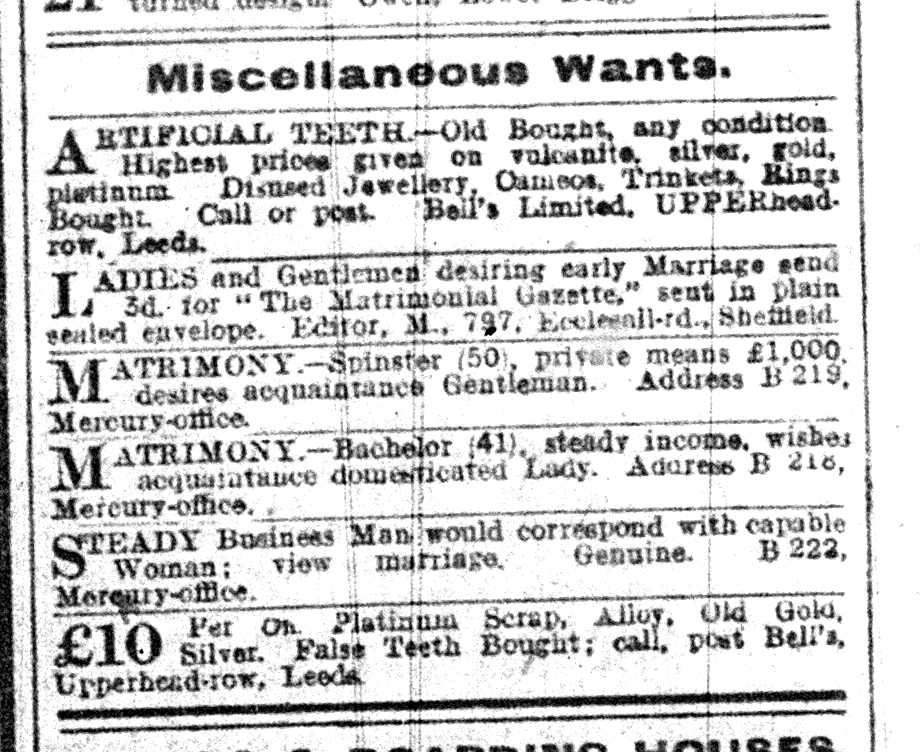 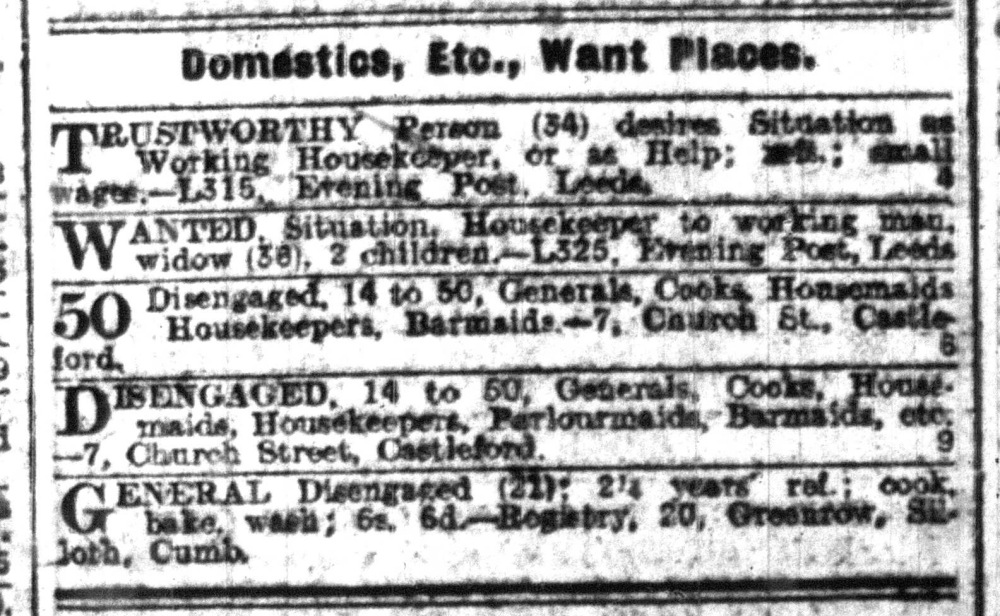 While theatre listings testify to a continued need for diversion of a different kind:

Popular entertainment can sometimes be seen as a kind of willful ignorance of what’s truly important; and the letter at the bottom of this final extract sees our author excoriating the Peace Convention on the grounds that it was an unwarranted luxury in a time of death on an unimaginable scale – expressing, at the same time, the deep and complex links between war, class and gender. For some, however, the weekend brought a poignant finality, as the top piece in this extract shows; gone, too, another connection to the older Leeds fast disappearing in the face of an increasingly modern city: 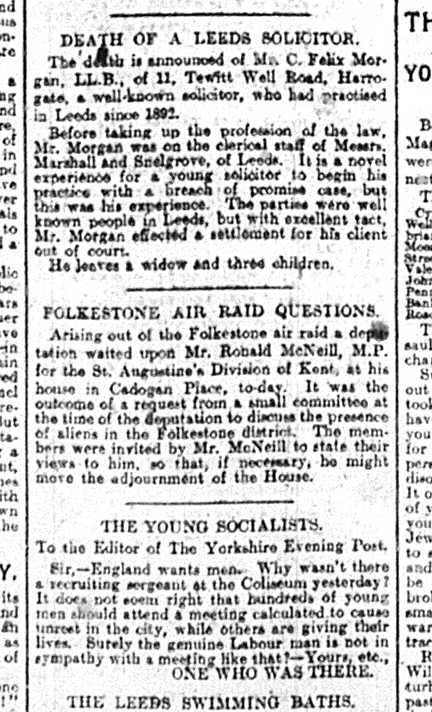 Of course, not much of this will be new to anyone familiar with the general thread of the nation and Leeds during those years – but there is a certain kind of thrill or interest in juxtaposing the seemingly-unrelated major and minor aspects of a society, gaining a sense of the (partial) totality at any given moment in time and space.

In doing so, such a approach reminds us – if we need reminding – that what normally counts as ‘historical’ and ‘important’, what gets written about and remembered, what gets commemorated, is only ever part of the whole story of any given History; and, for many people, even less than that.

That’s absolutely not to say that the 1917 Peace Convention is not worthy of assessment and analysis – clearly it is – only that the daily textures of everyday life are equally of value; and that the stories, the histories, we can piece together from the flotsam and jetsam of fleeting moments are as significant as any other. And that those fleeting moments remain something of an untapped resource for telling the vital histories of everyday people living everyday lives.

Such histories remain, for the most part, packed tightly, embedded in the collections held at libraries and archives; awaiting discovery. For any willing and intrepid explorer in the past, a whole world awaits: a legion of stories to be found, shared and heard.