Librarian Antony Ramm takes a brief look at the Leeds International Exhibition of 1890, a spectacular showcase with a sad ending…

International exhibitions made a frequent appearance in Europe and the United States during the second half of the 19th-century, providing “nations with opportunities to demonstrate their artistic, technical and scientific ingenuity.” Among the most famous of these expositions and world fairs were London in 1851 and 1862; Paris in 1867 and Chicago in 1893.

Sandwiched between those last two was the Leeds International Exhibition of 1890, which ran from May 21 to October 31 of that year, and which was brought to our attention by a recent customer enquiry  regarding a commemorative mug found in an antique shop.

A search for further information on the exhibition brought up a ‘Prospective Programme,’ a detail from which is reproduced below (visit our Local and Family History department to see the whole programme): 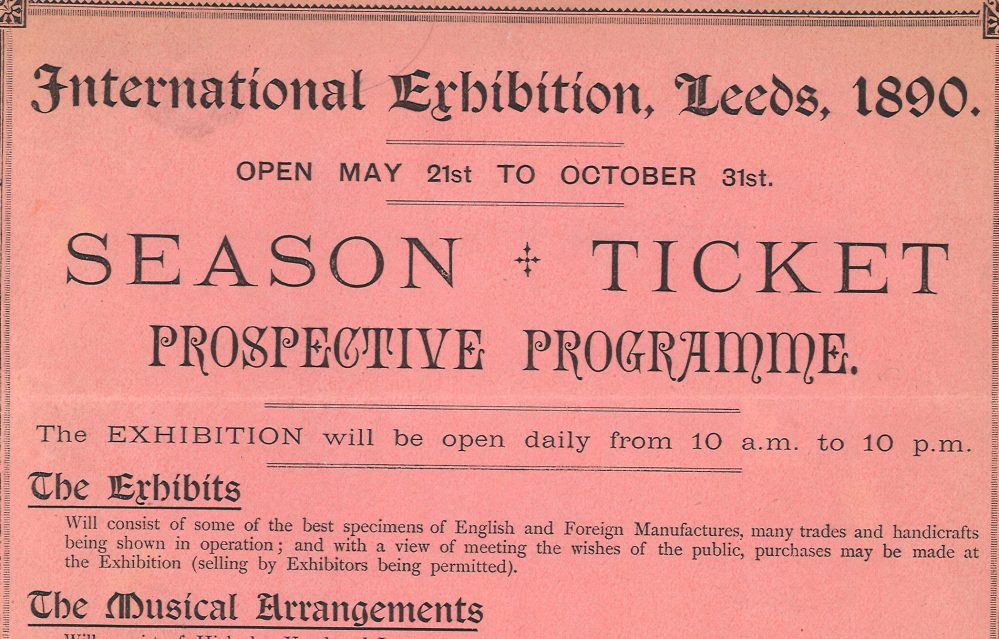 The Exhibition seems to have been a mixture of manufacturing “specimens”, musical performances and various ‘open air entertainments’, including military displays and, wonderfully, “CYCLING AND ROLLER SKATING, by Professional Riders and Exponents”.

The military “tournaments” were perhaps no surprise, given the location of the Exhibition: Carlton Barracks, the parade ground for the  Leeds Rifles, which can be seen in the c.1890 maps, above, and the 1964 photo, below.

An article in the Leeds Mercury, published the day after the exhibition opened, describes the “five acres of ground” as being “occupied by a concert hall, which has balconies on three sides, a dome roof, and a parquetried floor, capable of seating 1,700 persons, and where highly pleasant concerts, ballets, &c., are to be held.” The author of that article also reported that “no less than 235 firms” had “entered goods for the exhibition.”

A note of caution was sounded, however, with the Mercury also reporting that “custom was so far ignored that not a single speech was delivered on the occasion [of the Exhibition opening]'” while “some firms have not yet filled up the room at their disposal, and some days must elapse before the interior of the Exhibition proper presents a complete and finished aspect.”

Another Mercury article, two days later, saw little improvement, reporting much the same state of affairs, and noting that “the attendance of visitors was not very large”:

Nothing else was written about the Exhibition, at least not in the Mercury, until days before it was due to finish, when a list was published of firms and companies awarded various levels of merit:

While the publication of that list may give the impression the Exhibition had overcome its early problems and become a roaring success, another article – just one day before the original closing date of the exhibition – reported something which suggests those initial, less-than-sparkling, reports of low visitor and exhibitor figures had been correct after all: Mr Joseph Davis, named in the May 22 article as the general manager for the exhibition, was reported as being bankrupt and that his debts were a direct consequence of Davis’ inability to pay the rent owed for the Carlton site; a sad ending, indeed, to this short tale of the Leeds International Exhibition of 1890.