This week we hear from Josh Flint, from the Local and Family History department of the Central Library, who introduces his recent research into books exploring the rich history of battles and other conflicts in Yorkshire…

Yorkshire has been the battleground for some of the bloodiest, treacherous and most vicious battles ever fought in Britain. This research guide on Yorkshire Battles will chronicle all thirty battles, sieges and naval battles that have been fought in Yorkshire, ranging from the Battle of Catraeth, fought during the Anglo-Saxon Invasion of Britain in AD 600 up to the Battle of Orgreave during the Miner’s Strike 1984. This research guide will provide researchers an initial starting point for further research using the Leeds Central Library catalogue.

Some of the most important battles in British history happened in Yorkshire, including: the Battle of Brunaburgh in 937, which helped to define the separate kingdoms of Scotland, England and Wales; the Battle of Stamford Bridge in 1066, the last Viking attempt to conquer England; the Battle of Towton in 1461, arguably the largest and bloodiest battle in English history (as well as being a crucial influence on Game of Thrones); and the Battle of Marston Moor in 1644, which all but sealed the importance of Oliver Cromwell’s well-organised New Model Army.

During my research into Yorkshire Battles I found more obscure battles but with great significance, including: the Battle of Hatfield Chase in 633, which resulted in the separation of the great kingdom of Northumbria; the Battle of Heworth Moor in 1453, where the Nevilles fought the Percys, a clash which could be seen as the opening battle of the Wars of the Roses; The Battle of Leeds in 1643, where Lord Fairfax attacked the Royalists within Leeds because he wanted to control the important trade routes at the beginning of the English Civil War; and the Battle of Flamborough Head in 1779, where the newly created American Navy won their first major victory when they defeated the British Navy off the coast of Scarborough. I decided to make one research guide with all of these battles to show how they have shaped not only Yorkshire but the whole of Britain.

This comprehensive research guide will give a description of each battle and then offer five special items from the Leeds Central Library Catalogue from various departments including; Local and Family History, Information and Research and Central Lending. These five items from the library catalogue have been researched thoroughly and chosen because they add excellent detail to the events of the battle. The example below shows those books relating to the Battle of Flamborough Head, a naval battle fought during the American War of Independence off the coast of Scarborough. 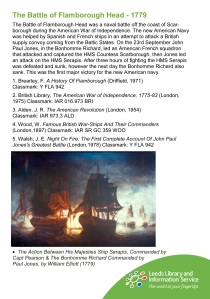 You can access the Yorkshire Battles Research Guide from the Local and Family History Department or online on the Research & Collection Guides section of this blog. Over the coming weeks I will use this Research Guide to promote the exceptional Leeds Central Library stock by delving into various Yorkshire Battles. The first one will be the Battle of Whinmoor in 655.