This week the Central Library welcomed two groups of design students from the Leeds Arts University to explore our collections on the theme of Yorkshire. The aim was to inspire these young creatives to develop work that explored the subject of the region’s landscape and heritage, as a way of graphically illustrating answers to questions such as “Would you promote it? [Yorkshire] What makes it good? How would you encapsulate it? What do you think the future holds for it? Should it go down in history?” 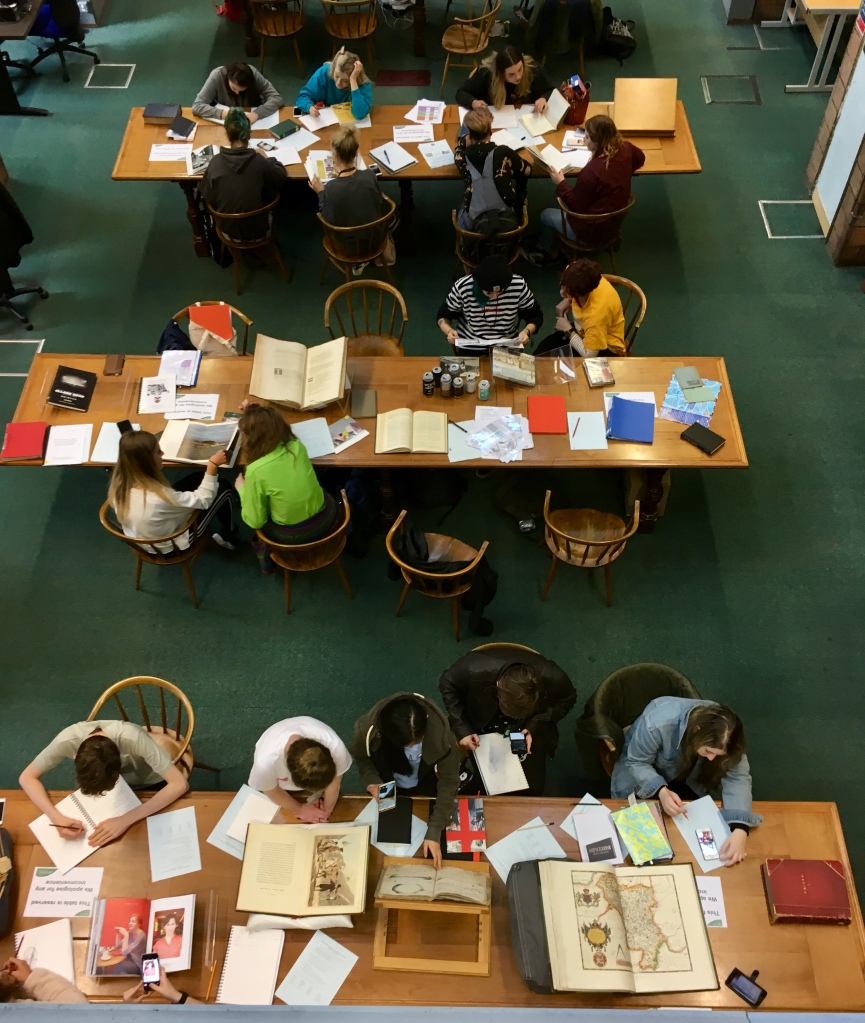 A wide-range of books were put in front of the students, who demonstrated a keen interest and a lively engagement with the materials. While there isn’t space here to offer a full guide to the collections on show (and we hope to encourage some of the students to formulate and publish their own thoughts via this blog), you can find here a brief synopsis of some especially popular items during the morning and afternoon sessions. The loose intention was to present examples of more ‘traditional’ representations of Yorkshire and its heritage, alongside those works that offered an, at least partial and usually implicit, critique of those viewpoints (while trying to avoid a kind of Whiggish teleology):

A Sense of Place
Two maps featured here: a 1936 facsimile copy of Saxton’s Atlas (of which the Central Library also holds a c.1579-90 original) and a much more recent publication – the Civic Trust’s Leeds Rainbow Plaque’s Trail.

The former – Britain’s first Atlas – is cartography as scientific rationality, the continual pursuit of objective accuracy, which defines ‘Yorkshire’ as a specific geographical place; the latter – while still tethered to specific locales – offers a more subjective approach to mapping, what we might call the cartography of experience or identity.

A Design for Life
The late 18th-century saw Leeds’ continued rise as a textile and manufacturing centre, and one possible impact of that wealth-creation was the development of a solid and viable creative sector in the town, catering to the emergent cultural and lifestyle needs of the embryonic ‘new’ middle-class – exemplified, perhaps, by the work of the Leeds Pottery company (later known as Hartley, Greens & Co.). The Central Library is honoured to be the repository for the pattern and drawing books of the Leeds Pottery company, most dated from the early period of the 1770s.

Today, in our own time, we have a similarly vibrant creative sector, represented in our collections by a book exploring the third-wave coffee scene in the North and a selection of craft beer cans, all brewed and designed in Yorkshire (mainly Leeds): Northern Monk, Roosters and North Brewing, among others not seen here. 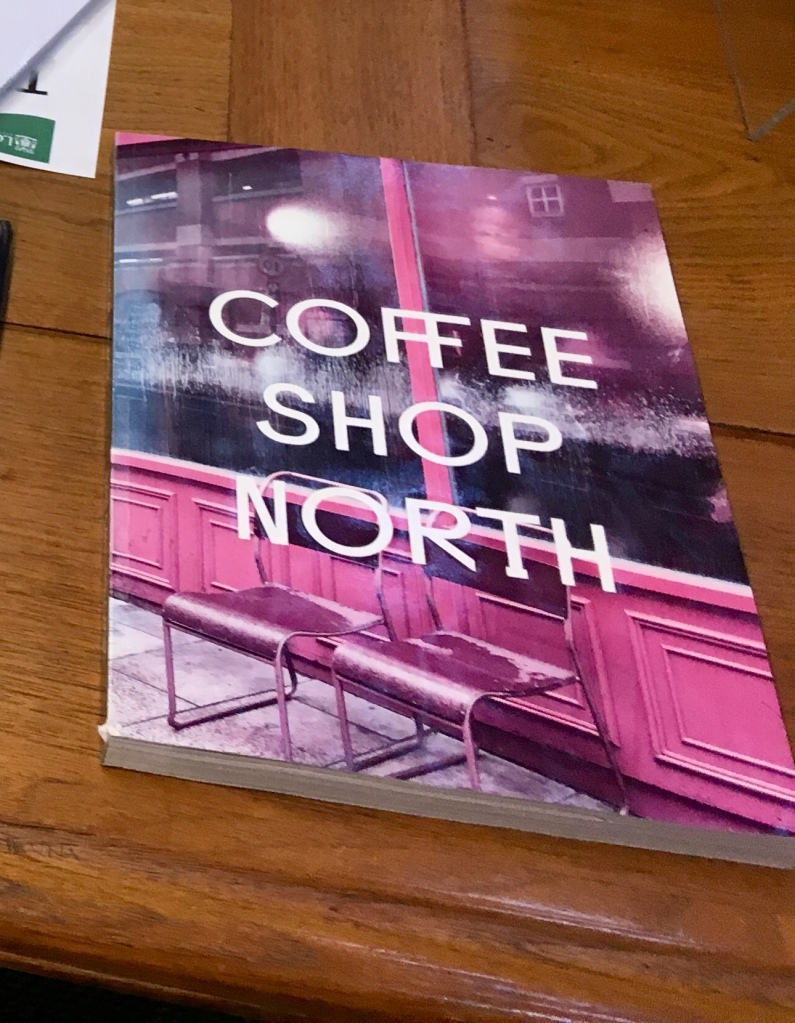 For What it’s Worth
Who would we expect to find featured in a book called Yorkshire Worthies? What differences would we see if such a book were published in 1869, as against an edition featuring worthies of 2018? What would those differences say about Yorkshire than and Yorkshire now? (if any).

Such questions come to mind when exploring two seemingly-distinct books: Edward Hailstone’s Portraits of Yorkshire Worthies: Selected from the National Exhibition of Works of Art at Leeds, 1868 and Celebrate! 50 Years of Leeds West Indian Carnival by Guy Farrar, Tim Smith, and Max Farrar. The former defines as ‘worthies’ those you would probably expect for the mid-Victorian era: Bishops, Reverends, Knights of the Realm, antiquarians, physicians, landowners, explorers – all male, all white, all bearing certain privileges of background and networks.

Celebrate!, however, tells a rather different story, one focused on grass-roots community initiatives, and the many men and women of colour whose collective efforts have seen the Leeds West Indian Carnival grow from its relatively humble beginnings in 1967, to the fixture in the city’s cultural calendar that it is today – albeit one that “remains rooted in the community whose heritage it celebrates.”

Arthur France MBE, the Carnival’s founder says in his foreword, “You don’t need a whole army to make a difference. You just need a few committed people with a clear vision and the will to deliver. This book names hundreds of those people…”: ‘Yorkshire Worthies’, indeed.

This Land is our Land
The name ‘Yorkshire’ conjures particular images, at least in the popular imagination: all rolling hills and glorious, verdant dales, among which are settled majestic country homes and religious buildings in various states of Romantic decay; all interspersed with cobbled streets and quaint villages, untouched by the forces of modernity: a Northern version of deep England. That vision comes across clearly enough in a book like the Collection of Prints of the Castles, Abbeys, Country Houses and Churches of Yorkshire (compiled in 1936, but featuring older prints).

But that often seems to be a vision experienced more by visitors to the County than its actual inhabitants, particularly (but not exclusively) since the Industrial Revolution. Since the late 18th-century, urban places and spaces, with all that they bring – cramped and unhealthy housing conditions, the alienation of dangerous work in dimly-lit factories – dominate the lives of more Yorkshire people than the lush rural environs of the tourism-industry fantasy. 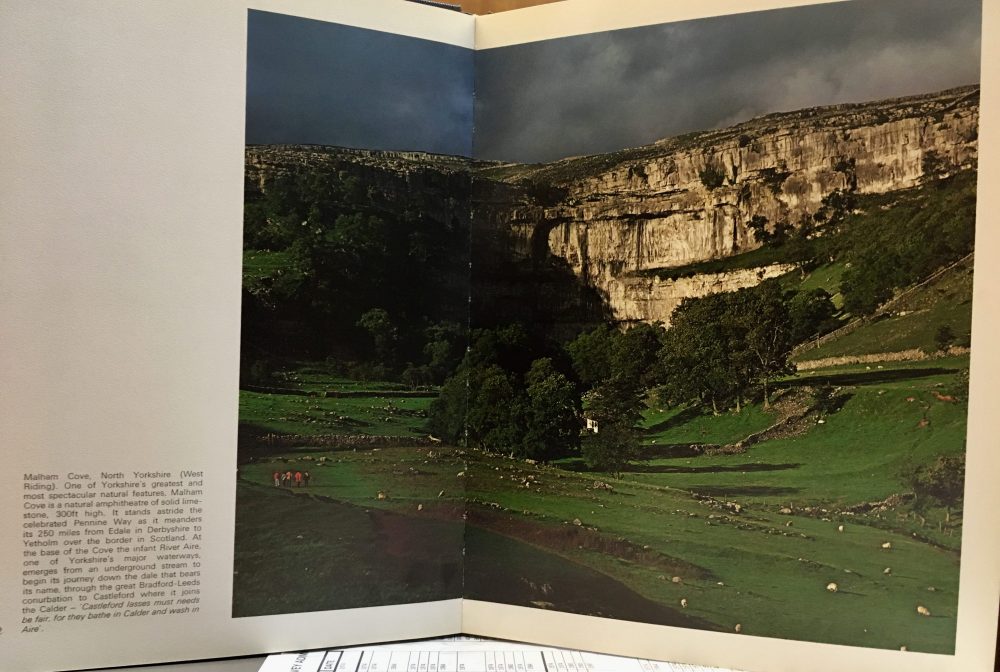 But those urban communities do not get passively crushed by the brutal machine of industrialisation and the cold hand of capital; they, instead, make meaning  from the material conditions presented to them, creating their own versions of ‘Yorkshire’ in the process – as in the subtitle of Jack Hulme’s book, A Photographic Memory: A People’s History of Yorkshire. 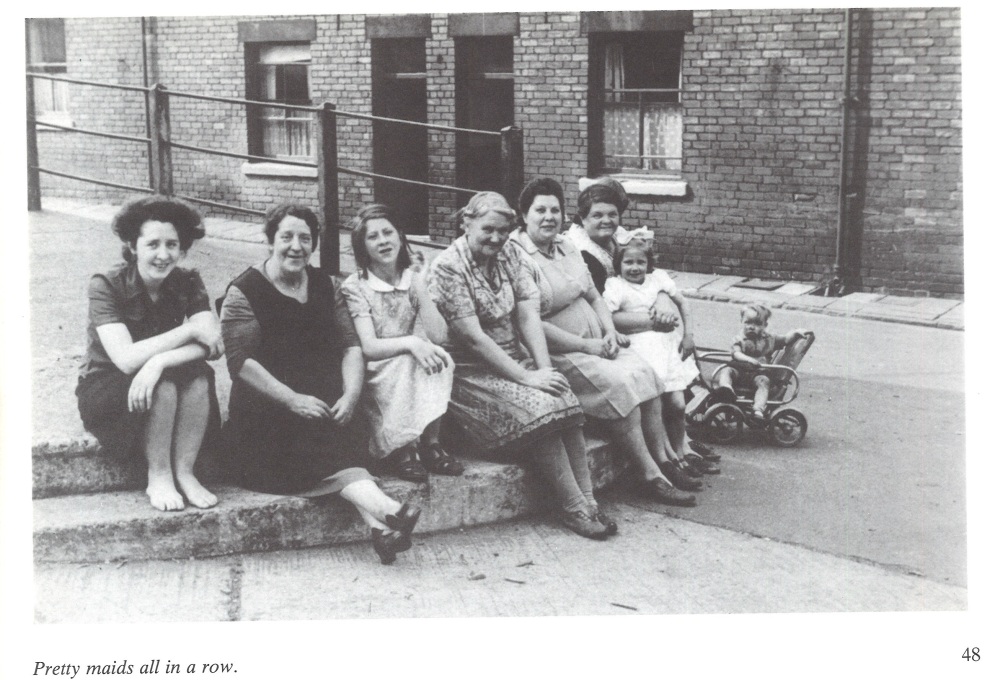 A Northern Powerhouse
Finally, the students were also invited to view two very important recent publications, both exploring themes and subjects core to the idea of ‘Yorkshire’ in the context of its heritage and its future: Cradle of Innovation (ed., Rachael Unsworth and Steven Burt, 2018) and These Northern Types (ed., Oli Bentley and Antony Dunn, 2018). Both are now available to view in the Central Library – as with all the books listed here, please ask in either the Local and Family History or Information and Research departments to arrange access.