This week Assistant Librarian Manager, Sally Hughes reflects on her chosen item for Speed Date a Library Treasure IV earlier in the year.

As part of our most recent Speed Date a Library Treasure event I took along a little gem from our stacks; Hints and Observations Relative to the Prevention of Contagious Fever, By R.W. Disney Thorpe, M.D. Physician to the Leeds Infirmary (Anno.1802). The ‘contagious fever’ referred to in this pamphlet is with little doubt, Small Pox. The text in essence is a series of recommendations with the aim of establishing a ‘House of Recovery’ for people suffering from Contagious Fever  in Leeds in the late 1700s/early 1800s, when poverty and unsanitary living conditions meant disease spread rapidly through communities. 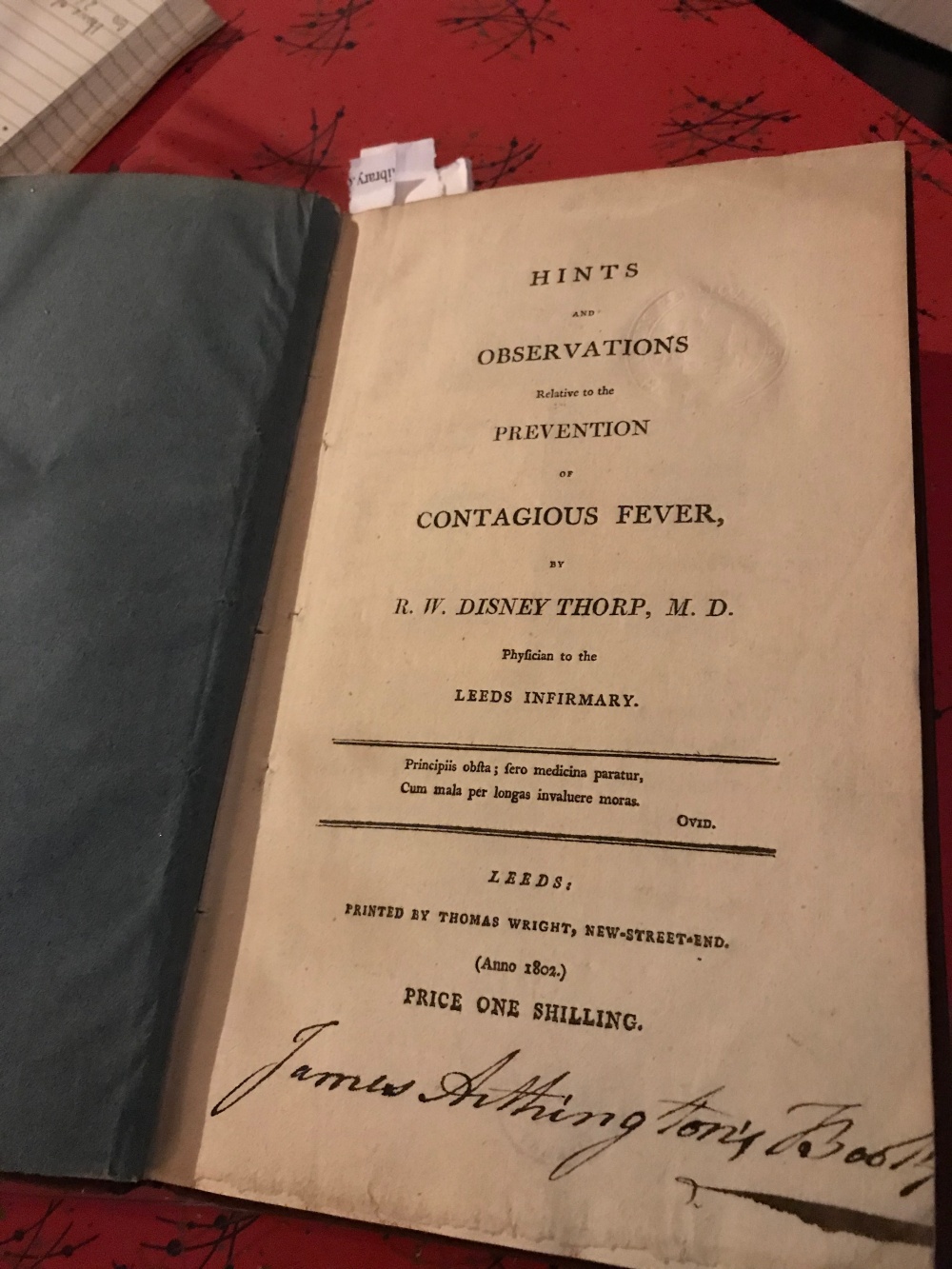 I unfortunately couldn’t find anything in our collections about the wonderfully named Physician R.W.Disney Thorp MD, and it is not explicit who this pamphlet was actually produced for, however it’s certainly not for the people of Leeds, rather a plea to help them. I suspect this was presented to authority figures and decision makers for the city, and this it seems not the first time Thorp has made this proposal. He opens by stating,

“The proposals for a House of Recovery having met with so favourable a reception I did not design to engage the public attention farther on the subject of Epidemic Fever, but to wait for the event of a permanent Establishment for so salutary purpose…..since those already have not produced the desired effect; and especially, as, after repeated endeavours continued to present period, a temporary building for the purpose has not yet been obtained.”

For context, the population of Leeds in the late 1700s was not particularly large and this was directly before the huge surge in population in the city when industry had exploded here by the mid 1800s. However, for people living in the city there was a stark contrast in living conditions; for example in city square we see grand apartments and houses popping up with wealthy inhabitants then the stark contrast of the poor slums on the opposite end of the city centre. Large families ( and sometimes more than one family) would live in small, cramped brick cottages which were very cheap but had no running water or sanitation facilities. In the 1790s working men would earn between 9 and 18 shillings per week meaning for many families life was hard, dirty and uncomfortable. Disease outbreaks were frequent particularly as regular working class people rarely had an accurate concept of cause or prevention of infection and disease. The general consensus is that Smallpox was the single most lethal disease of the eighteenth century, however due to there being little record or routine recordings of causes of death until much later in the nineteenth century, solid statistics can’t be produced. In January 1741 a Small Pox outbreak killed one quarter of the Lady Lane workhouse population, proving that in cramped and unsanitary conditions the disease is ruthless. However by 1768 there is an advert in a Leeds paper for ‘Onnoculation by a Mr Faber at his home in Shipscar‘ against the disease. This would, of course have come at a cost and the people of the cramped cottages could not or were not able to be vaccinated. By 1796 Edward Jenner had successfully introduced an effective Small Pox vaccine and this is around the time Thorp produced this pamphlet (the version we have is 1802, however the first was produced around 1797-1798), it was by now that medical professionals were understanding more about the disease. 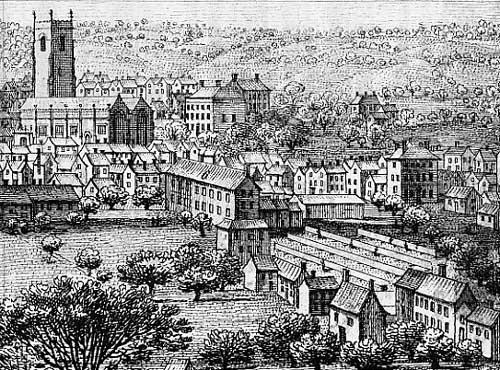 In honesty, I am mostly fascinated with gruesome details of the disease which aren’t spared in this pamphlet, thankfully (!) Thorpe describes the onset and symptoms of Contagious Fever, and his proposed methods of prevention and treatment. He begins with detailing his visit to some of the families suffering in Leeds,

“In a visit, made a very few days ago to these Abodes of Misery, I saw, in one particular district, upwards of twenty-five Families ill in Contagious Fever. In some Houses two, in others six or seven were confined, many of who appeared to be in extreme danger.”

The first Leeds Infirmary (pictured above) was opened in 1771, however by this time those in the medical profession knew that infectious diseases were exactly that, infectious! And likely to spread, therefore an infirmary with communal wards would not be suitable for such an illness and Thorp goes on to claim,

‘From a minute investigation into the nature of their complaints, I may safely assert, that a great majority of these might have been prevented by a timely removal of the first infected to a Fever Ward. Let the measures adopted by ever so judicious, their complete execution if impossible n the confined Dwellings of those to whom I allude.’

But, onto the gory bits…Thorp describes some pretty terrifying symptoms such as a ‘feeble’ pulse, a dry brown tongue and a blackening of the teeth and lips with an ‘extremely offensive’ breath. He also details alarming bowel movements, delirium and unstable temperature. It’s hard not to laugh (or gasp, I suppose) at the line which follows these symptoms,

“This disease, however, does not always commence in the mild manner above described.”

It does get worse.

“In these cases, the Patient generally compares the first impression to an earthly disagreeable smell, received in the Stomach, as from a grave newly opened, and the effects, shivering and sickness are instantaneous”

If smelling of a grave wasn’t bad enough he also describes blood rushing to the head, inflammation of the lungs, coughs producing brown and ‘reddish’ mucus and a ‘putrid fever.’ So how does one prevent and treat this? As is clear, Thorp is adamant that quarantine is essential to prevent the disease from spreading, and he also clearly states that the disease is passed on through items like bedding or clothes – this theory was often not believed by people who thought illness was carried through the air, or rather lingered in ‘stale’ air (to put it VERY simply). Air circulation and ventilation is still an important component in Thorp’s preventative tips, however he mostly concentrates on cleaning clothing and bedding, ‘whitewashing’ houses and importantly minimising visitors. He makes a clear point that patients owe it to their families and the community to deny visitors who may have ‘motives of curiosity, or ill timed, and often ill-expressed sympathy…’ See below for Thorp’s thought’s on these visits within the ‘lower classes.’

Thorp illustrates the steps to take if the onset of Small Pox begins; his points for  consideration include, Moisture, Curtains and Carpets, Air, Fire, Visitors (see above)! and my personal favourite section ‘Cold Affusion.’ Thorp assets that after the second or third day of fever,

“The Patient should  be stripped naked, and four or five Gallons of cold water thrown over him, he should then be dried and put to Bed….If the fever return(s) in eight or ten hours, the Affusion must be repeated to the third or fourth time if necessary.”

With the benefit of modern health knowledge some of Thorp’s suggestions can come across as slightly alarming, however there is logic to most. All his suggestions essentially come down to keeping the home and body clean, minimising contact with others and resting.

The pamphlet concludes with what is surely the most convincing argument for a House of Recovery; He sites evidence from a Dr Ferriar (although doesn’t state where Ferriar was practising medicine) who has managed to establish a House of Recovery,

“…two preceding years and eight months were 1256, something more than the average 400 a year, those in the same district from July 1796 (a period commencing two months after the establishment of the House of Recovery) to July 1797, being twelve months, were only 26′.

If you’re interested in any of the items we discuss on The Secret Library blog, do get in touch here