Fidget Theatre’s new show Pirate Bonnie launches next week for the half term holidays so we caught up with them to find out more about their brand new production and the inspiration behind it.

Can you introduce yourselves and Fidget Theatre?

Hello! We’re Fidget Theatre –  theatre makers Ruth Cooper and Andrea Heaton. We’re based here in lovely Leeds and we make theatre for people who like a good Fidget (children and their families.)

What is Pirate Bonnie all about?

Pirate Bonnie is all about discovering the true stories of lesser-known pirates. Our character Bonnie is a sort of story-hunting pirate, who finds stories of female pirates of old and tells (or sings) their tales to her swashbuckling crew.

How did you come up with that idea?

We had a meeting with Leeds Libraries because we wanted to make a show specifically for a library space. In that meeting was a member of library staff who was a bit obsessed with the books in the collections with stories about female pirates, which aren’t as well-known as their male counterparts. We love to make theatre with strong girls in the lead, there’s an enduring fascination with pirates for children and grown-ups alike and the librarian’s enthusiasm was infectious – so Pirate Bonnie was born!

What are the best bits about using historical events and old books as inspiration?

It was great to have a good nosey around the library and the librarian showed us 300 year old books which have accounts of these real pirates. The pirates are all very different, and a fair bit of the historical accounts depend on who is doing the re-telling, but each of the women in their own ways didn’t do what was expected. They all got to a point of saying “stuff this – it’s a pirate’s life for me” and that makes for an exciting story!

Your photoshoot took place behind the scenes at the library, what was that like?

It was brilliant! We worked with the photographer David Lindsay and our designer Emma Williams, and the photos came out really well.  Having all that history in the pictures is perfect. And best of all, the pirate obsessed librarian kept appearing with pirate related props! Why does she have a ships wheel in her office???

Let’s take a closer look at these special books with Rhian, our Collections Manager

We have really missed being able to share some of our collection treasures with people over the last year so it was amazing to be reminded of the time Fidget Theatre spent looking at our pirate books and exploring some of the hidden rooms in the library for their photoshoot. And I would have to admit that a ship’s wheel is probably not the strangest thing to have been found under a librarian’s desk! You just never know when you will need to bring to life a story with the help of a carefully selected prop. 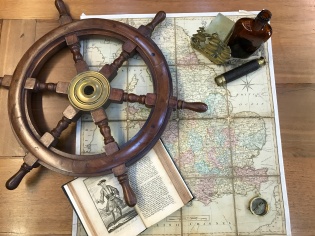 Pirate stories have captured our imagination since the Golden Age of Piracy which was between 1716 and 1726. This is when the most famous pirates lived and much of what we know about pirates comes from this period.

In Rebecca Simon’s new book ‘Why We Love Pirates’ she says that ‘we have always been morbidly fascinated by pirates’ and essentially they ‘were people who rejected society and created their own little world on their ship…They answered to no one but themselves’.[1] Although it was a dangerous way of life you can see how it would be appealing. No matter what your background was, money was equally distributed amongst the crew and any injuries were generously compensated. Captains were democratically chosen and living conditions were generally much better than on a navy ship

Life on a pirate ship also offered opportunities for women. If you were born poor or illegitimate there weren’t many options in society for you. Dressing as a man and taking to the seas was a way to gain the freedom, wealth and adventure that you couldn’t get elsewhere.

A General History was first published in 1724 and was an instant sensation, inspiring almost every piece of pirate legend we know. Both J.M.Barrie and Robert Louis Stevenson identify this book as a major influence for Peter Pan and Treasure Island. Even the Pirates of the Caribbean franchise must have been inspired by some of stories, pirate lore and images featured in this book.

One of the major selling points was the account of the notorious female pirates Anne Bonny and Mary Read who are featured in large font on the title page.

They were both born illegitimately, Anne in Cork and Mary in London, and they were raised as boys to hide the scandal of their birth. Mary never really got used to the restrictive life of an 18th century woman and ended up back in men’s clothing and joining the British Army overseas in Belgium. After she was discharged from the army Mary was unwilling to go back to England where she would probably be forced into domestic service so she kept her male identity (going by Mark Read) and headed to the Caribbean where she became a member of Catain Jack Rackham’s crew. Anne had moved with her father to America to start a new life but she too ended up in the Caribbean where she fell in love and married the flamboyant Captain Rackham, also known as Calico Jack.

On board Rackham’s ship Anne took a fancy to the new sailor Mark Read, without knowing that this was a woman in disguise. Mary was forced to reveal her true identity when Rackham became jealous of the relationship. Anne and Mary both had reputations as fierce fighters and in fact when their ship was attacked Rackham and the rest of his crew were too drunk to fight leaving the women to battle on their own. This led to their capture and to the execution of Calico Jack and the other pirates. Anne and Mary escaped hanging because they were both found to be pregnant during their trial.

Bonny and Read were not the only female pirates and women disguised as men in the Navy or Army at this time was more common than you might think.

Alwilda in The Pirates Own Book by Charles Ellms (1837)

Alwilda, also known as Alfhild or Awilda, has been part of Norse folklore since the 12th century but comes to modern readers through Charles Ellms’, The Pirate’s Own Book. She was daughter of Siward, King of the Goths and legend has it that she was kept in a tower guarded by snakes and any potential suitors would have to defeat the serpents before asking her to marry them.

After many men tried and failed to reach Alwilda, it was Prince Alf of Denmark who eventually defeated the snakes but when he went to claim his prize her father stated that, ‘He would accept that man only for his daughter’s husband of whom she made a free and decided choice’.[2]

And Alwilda chose not to marry Alf, rejecting society’s expectations by running away dressed in men’s clothing and becoming a successful pirate who terrorised the seas.

In a fairly traditional ending to the story, Prince Alf is sent to defeat the pirate who has caused so much disruption in the region. During the inevitable battle Alwilda’s helmet is knocked off and, ‘Seeing the smoothness of her chin [Alf] saw that he must fight with kisses and not with arms; that the cruel spears must be put away, and the enemy handles with gentler dealings’.[3]

Alwilda returns to women’s clothing and marries Alf, leaving the pirate life behind her. The subversive elements of this story are ultimately undone by Alwilda’s return to a traditional role female role. However the story still raises interesting questions about women’s agency and the expectations placed on women by society. Although Alwilda probably didn’t really exist there are more than enough women that her story could have been inspired by!

Ching Shih in The History of Piracy by Philip Gosse (1934)

Perhaps the most successful pirate of all time was Ching Shih, also known as Cheng I Sao, who commanded over 1800 ships and 80,000 pirates during the Qing Dynasty in the early 19th century. An account of her life, can be found in Philip Gosse’s The History of Piracy. He describes her as an excellent businesswoman and a strict disciplinarian. Her code of rules included severe penalties for taking ‘privately from the stolen or plundered goods’ and ‘any violence against any woman without permission of the purser shall be punished with death’.[4] This allowed her to control her large fleet and maintain the obedience of her crew. She was incredibly powerful and a thorn in the side of major powers, such as the East India Company, the Portugese Empire and the Qing government. Gosse says that with ‘her fleet bigger and stronger than ever, [she] swept up and down the China Sea at her own sweet will’.[5] For many years she evaded capture but eventually decided to retire and accepted a pardon from the Qing Imperial government. Ching Shih lived comfortably until her death at the age of 69.

How to watch the show

As part of our half term programming you can watch Pirate Bonnie in the series of performed storytelling films by Fidget Theatre; Mon 15, Wed 17 & Fri 19 February 3pm each day on Leeds Libraries Facebook. A series of swashbuckling digital adventures for 3- 7 year olds and their grown-ups! Pirate Bonnie is looking for treasure – but not ordinary treasure, for she is no ordinary Pirate. The treasures she seeks are stories, the long-lost Pirate legends of old. Over half term, join the crew and set sail with Bonnie on the Good Ship Adventure. Watch Live: facebook.com/leedslibraries if you miss it you can watch later via Fidget Theatre’s YouTube Channel.