In celebration of International Women’s Day and the anniversary of a Leeds suffragette and socialist we are highlighting the Mary Gawthorpe collection and other Leeds Library Collections documenting women’s suffrage in Leeds. 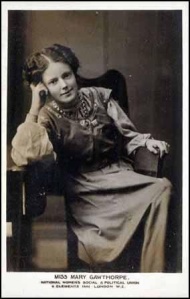 Born January 12th, 1881 in the Woodhouse area of Leeds, Mary Gawthorpe was the middle of 5 children to John and Anne, a leather worker and political agent, and needlewoman respectively.  A national school graduate she became a pupil teacher in 1894 at age 13 and certified as an assistant schoolmistress in 1904.

Lectures from George Bernard Shaw and A. R. Orage at the Leeds Art Club introduced Mary to socialism and saw her swift rise through trade unionism and local radical politics until 1906 when she became vice-president of the Independent Labour Party, Leeds branch.  She soon moved away from teaching to take up a career as a political organiser and speaker.

Mary became a member of the National Union of Women’s Suffrage Societies Leeds branch in 1905; however an affinity with the more militant Women’s Social and Political Union led to her becoming a society organiser and taking up a position on their national committee.  Her 1907 writing Votes for Men drew parallels with the early male empowerment effort.
October 1906 saw Mary’s first imprisonment for her suffrage involvement and during future incarcerations she took up the hunger strike, though avoided force feeding.  This along with violent assaults during the 1910 general election campaign left her with deteriorating health.  In 1911 Mary co-created and co-edited The Freewoman, a feminist journal advocating female sexual emancipation and an opposition to marriage.  A differing of opinions in 1912 led Mary to resign from The Freewoman and as a WSPU organiser, withdrawing from active service due to ill health.

Mary moved to the United States in January 1916, returning to suffrage and labour organising causes, assisting in the creation of the Farmer-Labour Party, and campaigning in the 1920 presidential campaign for candidate Parley Parker Christenson.  Married to American John Sanders in 1921, Mary kept her single name and retired from public life in 1922.  Despite her retirement Mary retained her interest in political matters, staying in touch with the Suffragette Fellowship and movements in Britain including the Campaign for Nuclear Disarmament.

Mary Gawthorpe died in the USA on March 12th, 1973 leaving behind a collection of papers including letters, diaries, postcards and photographs; a legacy of a lifetime of suffrage in Leeds, Britain and America.

The original papers were deposited in New York but various organisations and individuals in Leeds contributed to bring a microfilmed copy of the papers to Leeds.  Leeds Central Library was chosen as the best home for them and now anyone can view them in the Local and Family History Library.

The addition of the Mary Gawthrope Papers complements our existing Women’s History collection, including the Alice Scatcherd scrapbook. Alice was a life-long campaigner for women’s rights and women’s suffrage and her album of political, satirical and personal information was gathered during the 1880s and 1904.  She lived much of her life in Morley.

The photograph on the right was taken on 28th July 1908 and shows a group of women carrying placards and banners as they take part in the Women’s Social & Political Union’s (WSPU) Procession to Woodhouse Moor where a huge rally was held. On a fine Sunday, 28th July 1908, they began their march from the Town Hall. Bands played on Woodhouse Moor where thousands of people, both men and women, had gathered to listen to the various speakers from the 10 platforms. One of the most famous of the suffragettes to address the crowds was Adela Pankhurst, daughter of Emmeline Pankhurst and sister of Sylvia and Christabel, all leaders of the British Suffrage movement. Also speaking was Emmeline Pethick Lawrence who in 1912 was arrested with her husband and Emmeline Pankhurst for taking part in a window smashing campaign. They famously went on hunger strike while serving prison sentences.

The day on Woodhouse Moor was a great success with a resolution put advocating ‘Votes for Women’. It was carried by a huge majority as reported in the Leeds Mercury. The image was in a collection of newspaper cuttings which once belonged to Leonora Cohen (1873 – 1978), a suffragette who lived in Leeds but gained notoriety when in 1913, in order to publicise her cause she attempted to break the glass showcase in the Jewel House of the Tower of London containing insignia of the Order of Merit. A note wrapped around the iron bar she used read “This is my protest against the Governments treachery to the working women of Great Britain.” She was arrested several times over the years, once when she went on a hunger and then a thirst strike while in custody in Armley Prison.

Beneath this photograph, in her handwriting is written, “I, Leonora Cohen was arrested and charged with inciting the public to militancy under Edward 3rds act, (“a trumped up false charge”) at the same period as George Lansbury and John Scurr. A protest meeting was held in Trafalgar Square, London for the release of the three charged under the old Antediluvian Act”. Leonora Cohen died at the age of 105. Between 1923 and 1926 she lived at no.2 Claremont Villas, Clarendon Road and a blue plaque is now displayed on this property in memory of her.

To find out more about Mary Gawthorpe visit her entry at the Oxford Dictionary of National Biography, at the Leeds Library & Information Service Online Resources page, this can be viewed for free using your Leeds Library card membership number.

The WSPU photograph comes from Leonora Cohen’s Scrapbook, part of a Leeds Museums & Galleries collection. The image and text above can be viewed online at Leodis the Leeds Library & Information Service photographic archive of Leeds.