Today, Monday 4th August, marks a century since the entry of Britain into the First World War. While the Leeds Library and Information Service has many history books to help you understand the roots and causes of this conflict, we would now like to show you items from our holdings that show something of the thoughts and actions of contemporaries during the tragic rush to war. All of the resources mentioned below belong to the Information and Research library and are available to view by asking staff.

One week prior to the British declaration of war, Austria had declared itself at war with the Serbian nation it accused of organising the assassination of the Archduke Franz Ferdinand. The period between the assassination (June the 28th) and the formal declaration of war (July the 28th) – known as the July Crisis – was marked by furious diplomatic negotiations between all the European powers as tensions between Austria-Hungary and Serbia ebbed and flowed throughout the month.

A photographic gallery from the Manchester Guardian History of the War: Volume 1, showing some of the leading figures in the diplomatic manoeuvres of the ‘July Crisis’

Among the most interesting items in our collection are the reproductions of diplomatic correspondence during July 1914. These volumes were put together by each government once war had begun in an attempt to avoid the blame for starting the conflict; taken together, the volumes are a fascinating record of the diplomacy taking place – largely away from public view – during this tense period. Collections from the French, Austrian, German, Russian and British governments are available to view in the Information and Research department.

Diplomatic correspondence between Austria-Hungary and Serbia, June-July, 1914. From Collected Diplomatic Documents Relating to the Outbreak of the European War

When diplomacy failed, conflict between Austria-Hungary and Serbia became inevitable.

Image from the Austrian Red Book, showing the telegram sent from the Austrian-Hungarian foreign minister, Count Leopold Berchtold, to the Serbian Foreign Office, in which the official declaration of war by Austria-Hungary to Serbia was made

From a British perspective, our Hansard collection (Hansard being a verbatim record of everything said in the Houses of Commons and Lords) allows the reader to trace the thoughts and reactions of government to continental events on an almost daily basis. Interestingly, relatively little mention was given to those events until Austria-Hungary presented Serbia with an ultimatum on July the 23rd.  Even at that stage, the hope was that the conflict need not draw in other European powers, especially Britain. The image below shows the comment made by Edward Grey, Foreign Secretary, regarding the Austrian ultimatum:

“As long as the dispute was one between Austria-Hungary and Servia [Serbia], I felt that we had no title to interfere”: sadly, for Grey, from this point events escalated quickly, as Germany and Russia both entered the conflict on the side of their allies (Austria-Hungary and Serbia respectively). Part of the German war plan involved an attack on France (itself a Russian ally) and this necessitated a route through non-aligned Belgium. Consequently, in the early days of August Grey felt it necessary to make a speech outlining the British position on Belgian neutrality, guaranteed as it was by a treaty of 1839: 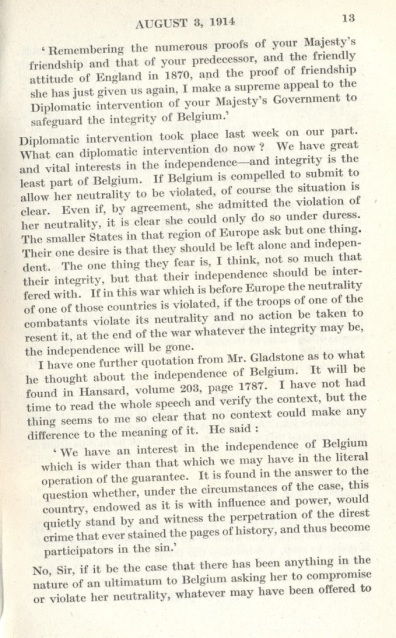 Just one day later, on the 4th of August 1914, Britain presented Germany with an ultimatum, after the latter’s violation of that Belgian neutrality. The reporting of this ultimatum to Parliament can be seen below:

A reply was demanded of the German government by midnight of the 4th; none was received: Britain had entered the First World War.

Another way of closely following contemporary reactions to these events is through the newspapers and journals of the time. As well as access to The Times Digital Archive (1785-1985), the Information and Research department also holds a vast archive of current affairs periodicals – such as The Spectator – stretching back into the 19th-century. The extracts below show how quickly press reporting in 1914 changed during the ‘July Crisis’, from singling out the Austro-Hungarians as the main protagonists in the conflict (July the 25th) to blaming Germany alone (8th of August). Clearly, this shift in emphasis reflected the outbreak of war between Britain and Germany.

The Spectator, July the 25th 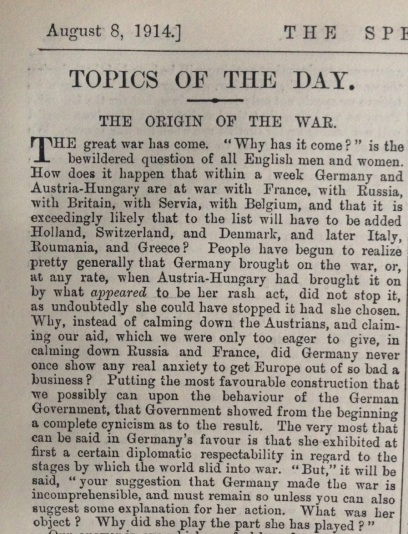 Of course, these developments did not take place in a vacuum; they were not triggered by the assassination of the Archduke alone, or even the German invasion of Belgium. In fact, British-German tensions had been steadily building since the middle of the 19th-century, as the latter sought to displace the former as Europe’s key power. An insight into this growing British concern can be seen in such contemporary texts as the imaginatively-titled Germany’s Swelled Head (Emil Reich) and the article ‘The German Peril’, which can be found in an issue of the Quarterly Review periodical from 1907. 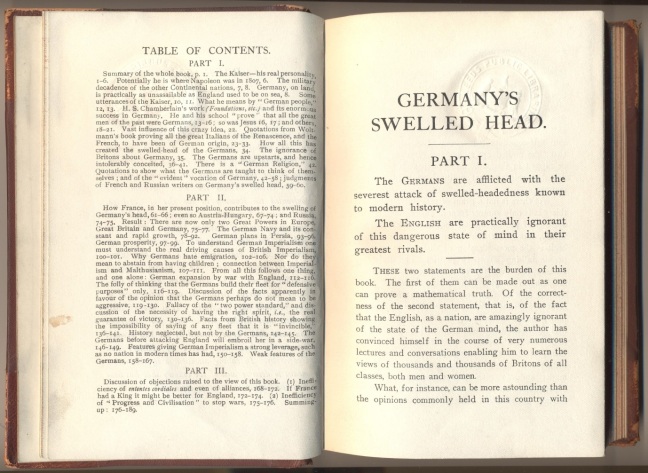 (above) Germany’s Swelled Head; (below) ‘The German Peril’ 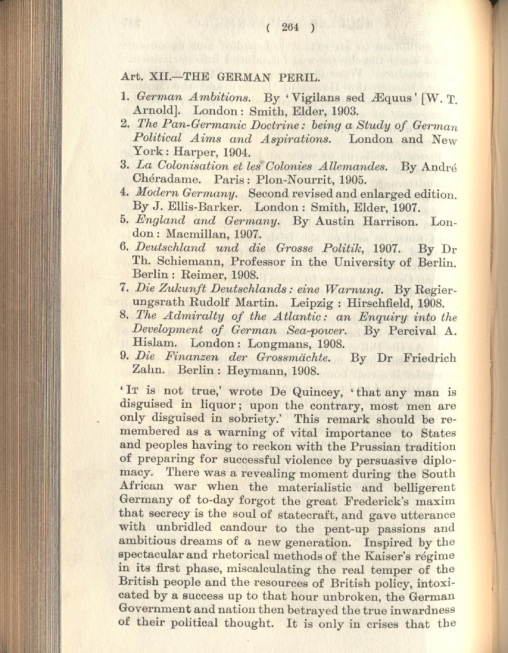 So, the British entanglement with Germany in August 1914 would not have come to a surprise to anyone paying even slight attention. In fact, as the extract below shows, some in Britain had been predicting war with Germany for a decade before their rivalry took a firm, and ultimately tragic, hold in the summer of 1914: 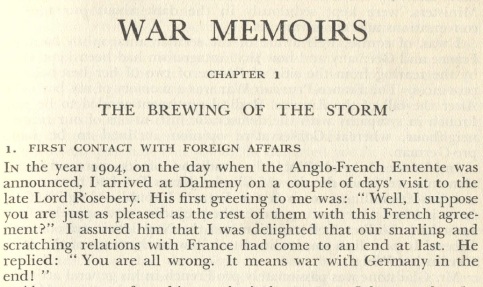 The resources presented here represent only a snapshot of the primary sources available in the Information and Research library and we hope to produce more blogs of this nature as other anniversaries of The Great War are reached over the coming four years.

Map showing alliances across Europe in 1915, from Why the Nations Are at War: The Causes and Issues of the Great Conflict, a Graphic Story of the Nations Involved, their History and Former Wars, their Rulers and Leaders, their Armies and Navies, their Resources, the Reasons Why they are Involved in the War, and the Issues at Stake