The stacks in the Central Library hold around 250,000 items, a dizzying array of materials covering a vast multitude of fields. This ‘stack stock’ is split into a few main sections: around 40,000 books available for loan; our archived journal holdings; and our Special Collections. While the majority of these items are available to find on our library catalogue, we are aiming to make our collections more accessible by publishing guides highlighting some of the most interesting titles across particular subjects and themes.

One recently-completed collection guide focuses on holdings in the social sciences, sociology and anthropology. An especially interesting title in that guide can be found in our Special Collections: a first-edition of Claude-Adrien Helvetius’ De l’esprit (translated as “On Mind”). Published in 1759, this was a startlingly radical work in its time, in which its author argued that all human faculties could be reduced to physical sensation and that individuals are governed by self-interest – the love of pleasure and the fear of pain. Helvetius developed those ideas to claim that humans are born with an innate equality of intelligence; that the quality of education is the only agent of difference between peoples; and that standards of justice and injustice were determined by custom rather than absolute right. That aspect of Helvetius’ work was deemed so dangerously atheistic that the book was declared heretical and, in some case, burnt. An influence on later thinkers such as Jeremy Bentham, John Stuart Mill and Karl Marx, D l’esprit remains somewhat undeservedly unknown today. 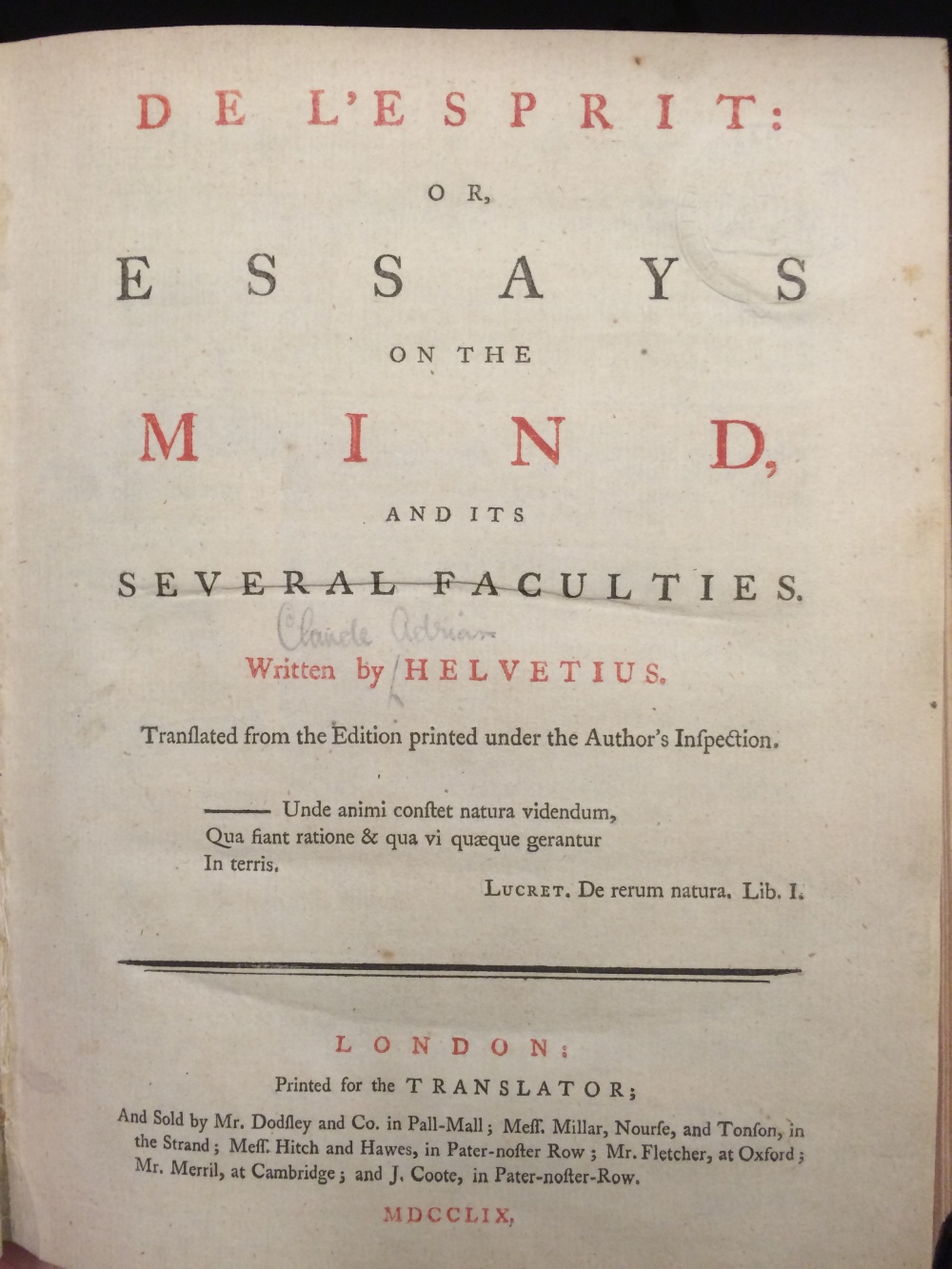 Other titles in our Special Collections for the social sciences include a 1767 edition of Thomas Short’s A Comparative History of the Increase and Decrease of Mankind in England; a charming volume from 1837 entitled “Look Before You Leap”: Being a Plain Consideration of What the Peerage is and Why it Should Continue What it Is; and two contrasting views of women – William Alexander’s The History of Women: From the Earliest Antiquity to the Present Time (1779: 2 Volumes) and Alexander Walker’s Woman: Physiologically Considered as to Mind, Morals, Marriage, Matrimonial Slavery, Infidelity and Divorce (1839). While Alexander’s book has been criticised for being no more than a “history of politeness to women” it can be praised for not containing lines such as Walker’s “As to works of genius, they exceed the capacity of woman”!

Items in our Special Collections are only available on a reference basis. We still hold those aforementioned 40, 000 items for loan, however – the majority of which are classic or key texts in their fields and not available elsewhere in our service. Particularly well-represented across the social sciences are titles by major thinkers of the post-war era: Michel Foucalt’s Madness and Civilisation: Insanity in the Age of Reason; Herbert Marcuse’s One Dimensional Man: Studies in the Ideology of Advanced Industrial Society (1964); The Open Society and its Enemies (1966: Volumes 1 & 2) by Karl Popper and Claude Levi-Strauss’ The Savage Mind (1966). Possibly the most famous of all, however, would be Marshall McLuhan’s 1967 The Medium is the Massage (sic) and Shere Hite’s reports on female and male sexuality (1977 and 1981 respectively).

You can see the full collection guide – which broadly spans the Dewey Decimal Classification series from 300-307 – including a list of relevant journal holdings, by clicking here and see all titles in the collection guide series by clicking here. Alternatively, contact our Information and Research department to find out more about accessing any of the titles mentioned in our blog.