No doubt most readers of our blog will be spending this evening enjoying one of the many wonderful art events happening around the city centre as part of the annual Light Night celebrations. And most readers will probably already be aware of how those celebrations started – in 2005, as part of the launch of the region-wide Illuminate Cultural Festival, itself based on the French model of the Nuit Blanche: an annual all-night or night-time arts festival. Twelve-years later – showing every sign of continual and vibrant growth – Light Night remains a highlight of Leeds’ cultural year.

But what few visitors to those spectacular displays of ‘light’ in a myriad of weird and wonderful locations and forms will know, is that Leeds has something of a long history when it comes to such things. These ‘Illuminations’, as they were known, were social events involving the whole town and held to celebrate major occasions such as British victory in war. As David Thornton writes in his superb reference work Leeds: A Historical Dictionary (2015) –

At a given time in the evening set by the Mayor, the windows of all the houses in the town would be lit with candles and shops would present illuminated displays…[C]rowds,, who were used to darkened streets with little illumination, wandered around the town enjoying the glittering spectacle.

– which certainly sounds familiar! We wanted to find out more about these intriguing (mainly 19th-century) events – so, using the free access enjoyed by all users of the Leeds Library Service to the British Library’s 19th-century Newspapers Online, we did a quick search of the Leeds Mercury to discover more.

The first Illumination we found occurred in 1820 and was in celebration of the government’s withdrawal of the extremely controversial Pains and Penalties Bill. This is how the Mercury reported the events in Leeds and Hunslet:

And here is how the Mercury reported on the spectacular array of illuminations on September 18, 1855, to celebrate the ending of the Crimean War (in part, at least – the full article can be read via the aforementioned 19th-century Newspapers Online resource): 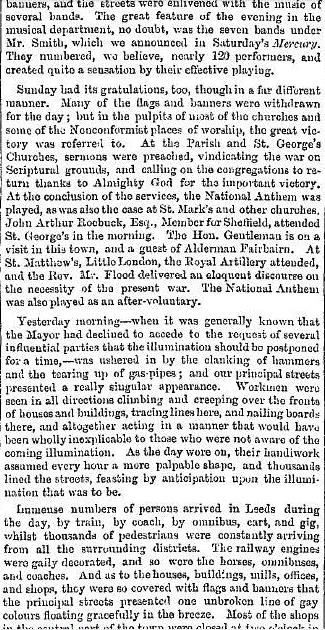 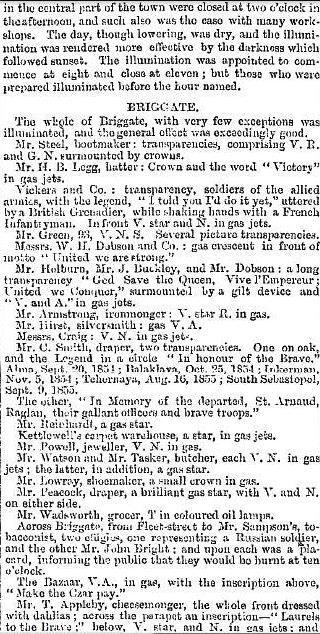 So, while you’re enjoying tonight’s wonderful selection of displays, just remember that you’re part of a rich tradition stretching back over 200-years. Remember also that, as always, the Central Library is playing host to its usual weird and wonderful installations and exhibitions; all themed around the ‘elements’ and our collections. We look forward to welcoming you this evening!

To get in the ‘light’ mood, why not read last year’s Light Night article, on Joseph Priestley and his writings on the subject? There’s also a research guide highlighting some of the most interesting light-based books from around the Central Library’s specialist departments.