As part of our Light Night celebrations, the Library is hosting a display of rare books on the subject of light, optics and astronomy. Alongside classics by such prominent scientists and philosophers as Galileo Galilei, Alexander von Humboldt, Christiaan Huygens, Nicolaus Copernicus and Isaac Newton, visitors can find a book published in 1772; one written by a then-citizen of Leeds town itself – Joseph Priestley.

That book is entitled The History and Present State of Discoveries relating to Vision, Light, and Colours. Originally conceived as the second part in a history covering “all the…[b]ranches of experimental philosophy” (Priestley had published a similar History and Present State of Electricity in 1767), Optics betrayed Priestley’s relatively weak grasp of his subject – and its consequent lack of financial success caused him to abandon his wider plan for the series. And yet the book remained the only English-language work on the subject for 150-years and continues to be a profitable source of contemporary reporting in the field of experimental science. 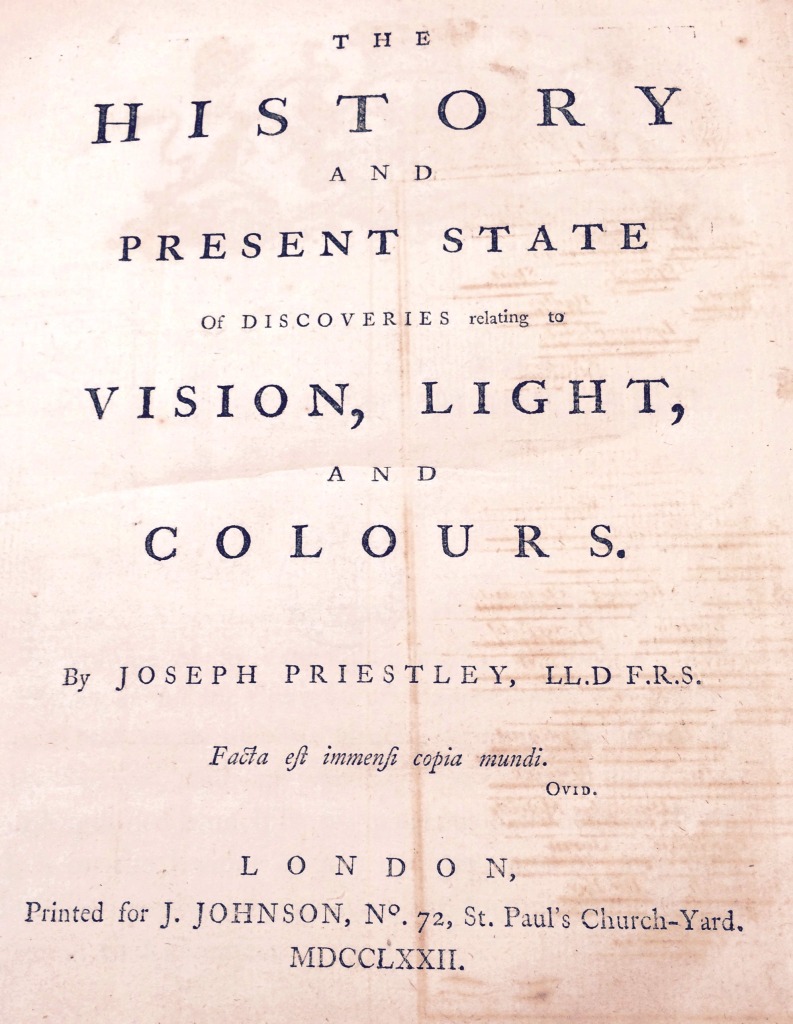 At 812 pages Optics is probably a little dense and opaque for most readers almost 250-years later; but the book retains a fascination, especially in its curiously beautiful plate illustrations. Some examples of these can be seen below. 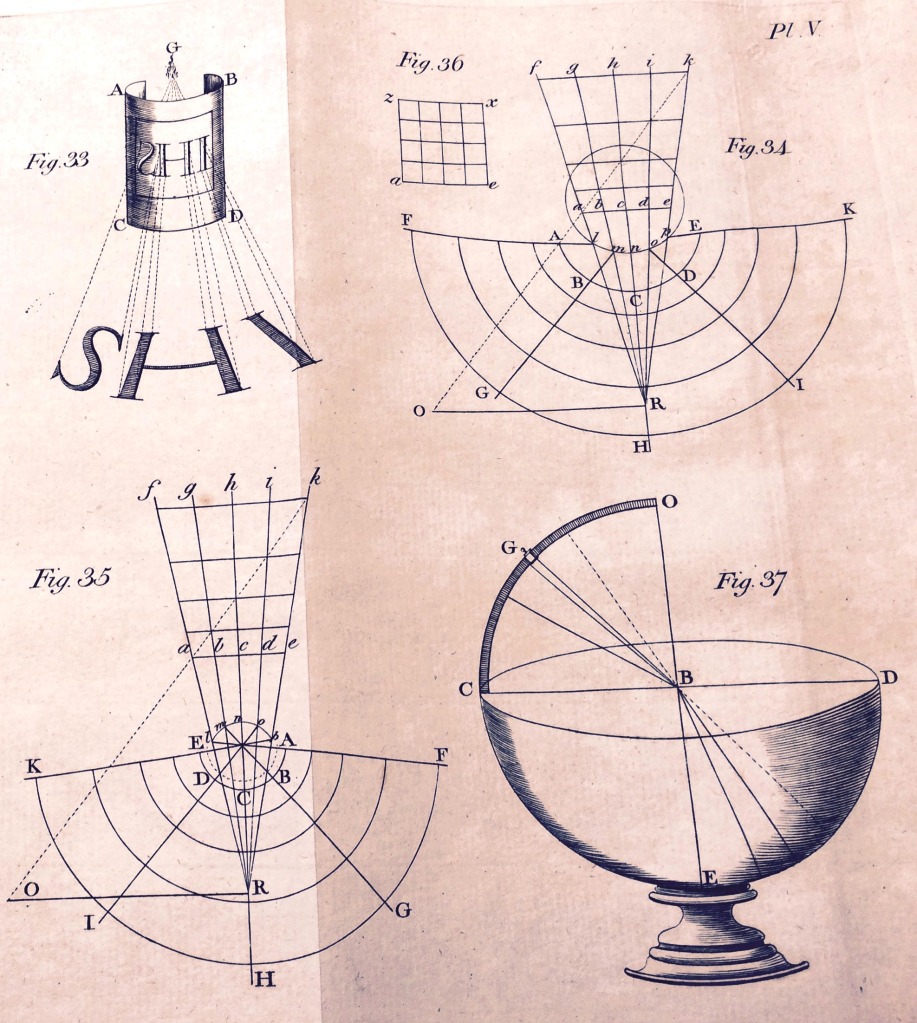 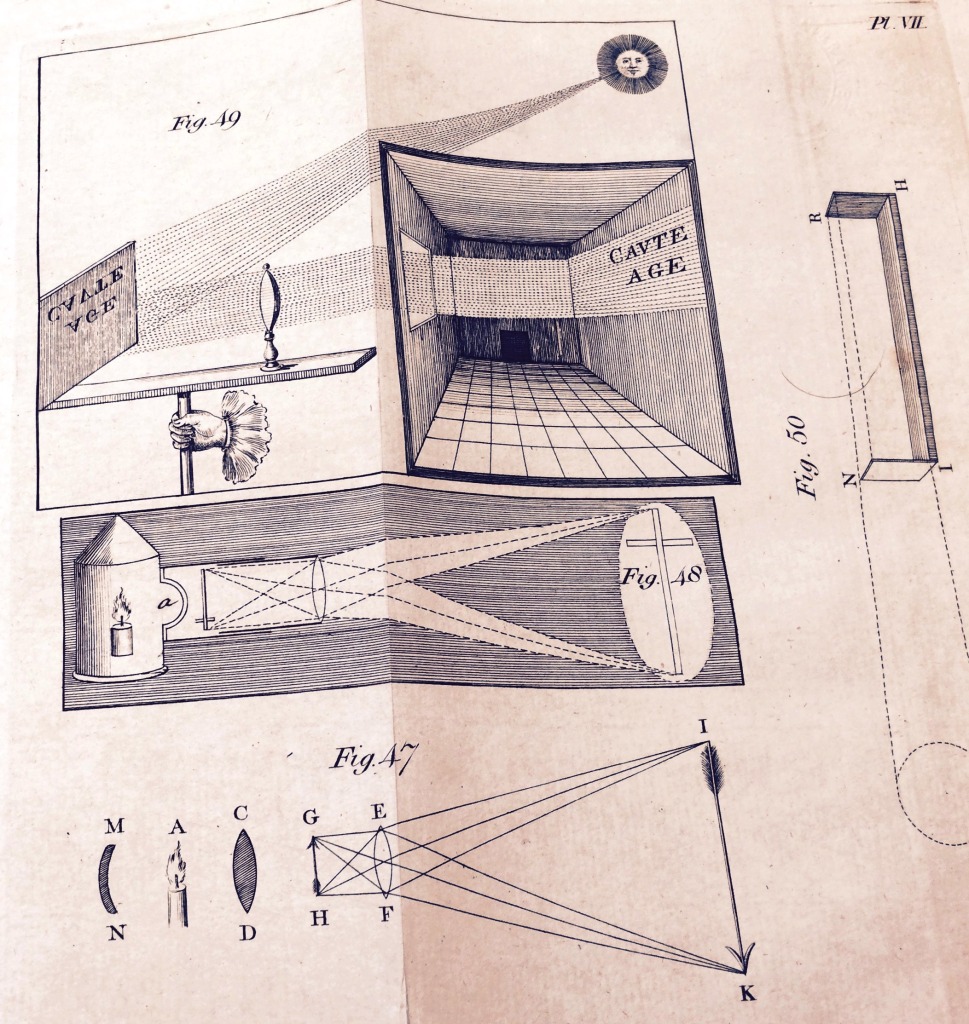 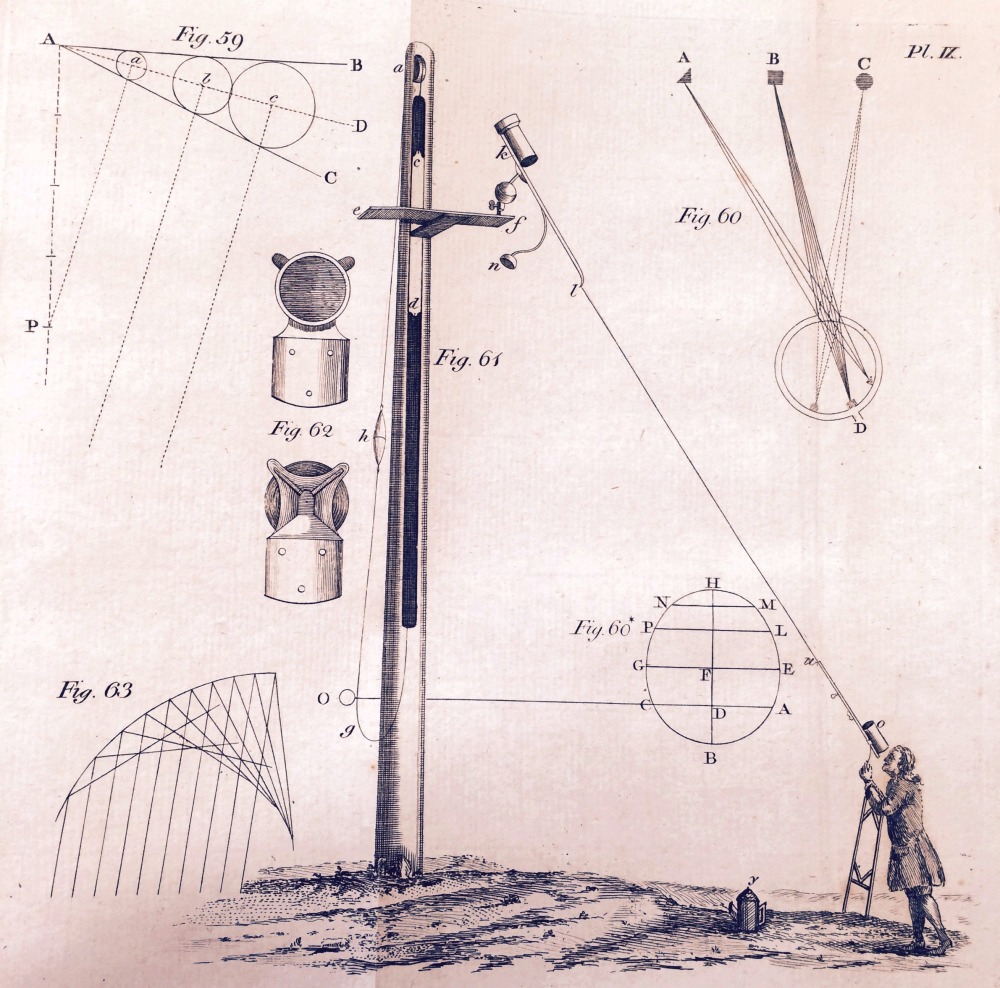 During the time he wrote the text Priestley was minister for the Mill Hill Chapel, as he had been since 1767. He was instrumental in shifting the doctrine of the chapel from the Presbyterian to Unitarian form of worship. Priestley was also deeply involved in the formation of the Leeds Library (the private library on Commercial Street). He left Leeds in 1773, just after the publication of both Optics and his scientific paper ‘Impregnating Water with Fixed Air’ – an innovation, inspired by his fascination with the gases created during the fermentation process in brewing, that would lead directly to the first carbonated water.

In 1773 Priestley accepted the position of tutor to the children of William Petty, a future Prime Minister of Great Britain. The following year saw Priestley successfully isolate oxygen gas, the achievement for which he is perhaps best known.

Although born in the West Riding, Priestley’s wide-ranging interests took him far afield and he died in 1804 while resident in Pennsylvania. His legacy is significant in the fields of natural philosophy, chemistry, theology and liberal politics. The city of Leeds commemorates those achievements through a statue of Priestley in City Square.

Visit the 2nd-Floor to see Priestley’s Optics, alongside other texts from the history of light in science. You can see a fuller list of all those texts through this research guide. And click here to read more about all the fantastic Light Night events taking place in the library – including some hands-on light “experiments” in our Information and Research department!