The 58th election for the President of the United States of America takes place on Tuesday next week. While everyone will have their own views on which candidate should take that office, this seems like a good opportunity to take a look back at some of the key books on American politics that you can find in the collections at the Central Library. These are books of especial interest to anyone wanting to delve deeper into the political history of a country that has been more divided in its philosophy than many care to admit. Three periods in particular stand out from this perspective.

As a nation state, the US was born in the deeply political revolutionary moment of the 1760s, 70s and 80s. Any study of the country’s politics and political system should, therefore, start with some of those primary and secondary sources assessing that – metaphoric, and literal – conflagration. Thomas Jefferson – primus inter pares – is the central figure here; various volumes of his writings are available in the Central Library, but of most relevance will be The Political Writings of Thomas Jefferson (edited and introduced by Edward Dumbauld).

Readers interested in this period should also spend some time with The Federalist Papers, a collection of 85 essays and articles written by such titans of Revolutionary-era thinking as Alexander Hamilton, James Madison and John Jay. Primarily designed to lay out rational reasoning why the new American citizenry should vote to ratify their new Constitution, the Federalist Papers also succeed in stating those key positions that would dominate American political thought through to this year’s election: in short, that is, the extent to which local (i.e. state) or federal (i.e. national) should exercise the majority of power in the new system. The Federalist Papers have been called “an incomparable exposition of the Constitution, a classic in political science unsurpassed in both breadth and depth by the product of any later American writer” and “the most wonderful work ever struck off at a given time by the brain and purpose of man”. 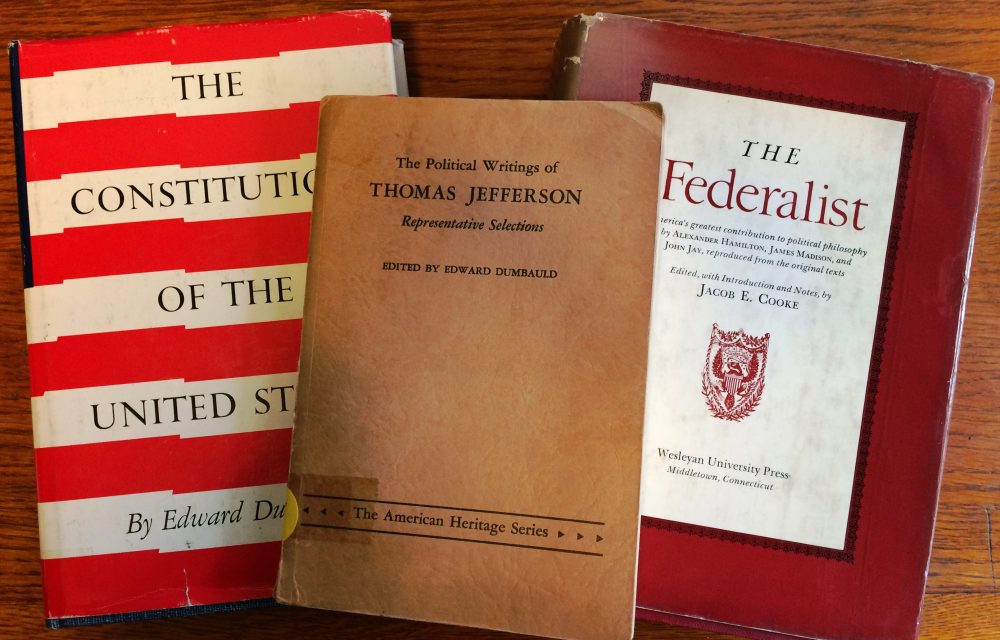 George Bancroft’s 1882 History of the Formation of the Constitution of the United States of America (2 vols) was one of the first serious histories of that seminal document; it can be supplemented with Edward Dumbauld’s more modern and interpretative The Constitution of the United States. The Federalist Papers can also be read alongside John C. Miller’s classic work in the New American Nation series: The Federalist Era: 1789-1801.

Those wanting to take their reading back to assess the intellectual development of those “present at the creation” (to quote a later American statesman, of sorts) would be well-advised to seek out Gordon S. Wood’s The Creation of the American Republic: 1776-1787. Dauntingly dense in its approach to the subject, Wood’s account is nonetheless still the gold standard for any serious investigation of politics in the Revolutionary era (and has previously stood as a symbol of the broad and wide range of the Central Library collections).

Moving on into the mid-1800s, we once again find America on the verge of civil war (for the War of Independence deserves that name as well as any other). Bridging the gap between those two eras is Alexis De Tocqueville’s masterpiece: Democracy in America (1840) – a 758 page analysis of how republican representative democracy had, in his view, succeeded; as well as a prescient warning of how the presence of slavery in that system darkened and undermined its more celebratory aspects. That De Tocqueville had made the right judgement was made only too clear in the two decades following his book’s publication, as the new American nation tore itself apart over precisely those issues of race and human bondage.

The politics of that period are supremely assessed by David Potter in his The Impending Crisis: 1848-1861; and the War period itself is well-seen through James M. McPherson’s Battle Cry of Freedom: The Civil War Era. The key figure in this period remains Abraham Lincoln (although every men, woman or child kept in bondage would make stake a more than fair claim to that mantle); the reader can interrogate Lincoln’s politics in biographies like the one-volume edition of Carl Sandburg’s The Prairie Years and The War Years. Lincoln’s most important decision – the Emancipation Proclamation – is analysed in John Hope Franklin’s book of the same name, while Lincoln’s struggles to control his team of rivals is assessed by Don Fehrenbacher in The Leadership of Abraham Lincoln. Perhaps the most fascinatingly political figure in the Civil War era, however, is John Brown: an abolitionist who believed armed insurrection was the only way to overthrow the institution of slavery in the United States. Brown’s life and its place in his times can be traced through Stephen B. Oates’ Our Fiery Trial: Abraham Lincoln, John Brown and the Civil War Era.

More recently, the 1960s saw the American 20th-century experience its own kind of civil war; not necessarily as politically ideological as the Revolutionary or Civil War periods, the decade nonetheless saw Americans thoroughly divided over political and social issues such as Civil Rights, the Vietnam War, Feminism and the redistribution of wealth. As with the earlier periods, politicians and political leaders are a reasonable starting point for an investigation of these tumultuous times; and America was fortunate to have several seminal accounts of the political process preserved in book form. Theodore White’s classic accounts of the elections in the 1960s are as good a way into this subject as any narrative history: available at the Central Library are his The Making of the President: 1960, 1964, and 1972. Richard Nixon’s success alongside his silent majority in that latter election – and its subsequent unraveling – are brought to life in classics like Carl Bernstein and Bob Woodward’s All The President’s Men and Deborah Hart Strober’s compilation of oral histories from The Nixon Presidency.

Missing in that chronological list is perhaps (- perhaps) the most furiously fought election in all of American history: 1968. The strange, almost apocalyptic, fervor of those times can be sampled in Norman Mailer’s Miami and the Siege of Chicago, Lewis Chester’s An American Melodrama and Jules Witcover’s 85 Days: The Last Campaign of Robert Kennedy; although Vincent Bugliosi’s Helter Skelter: An Investigation Into Motive, or Hunter S. Thompson’s The Great Shark Hunt: Strange Tales From a Strange Time, or Tom Wolfe’s The Electric Kool-Aid Acid Test, perhaps tell the whole weird story of American in the 1960s as well, if not better.

While not explicitly about ‘politics’, these books are still extremely political in their situating of individual lives in their times; posing serious -albeit, perhaps, unanswerable – questions about personal and social freedoms and responsibilities. That, in a sense, was also De Tocqueville’s terrain in the 1830s, and the work of Christopher Lasch – such as his The Revolt of the Elites and the Betrayal of Democracy (1995) – offers an illuminating way to think about how responses to the same issues have evolved with, and reacted against, the struggles of the 1960s. The political context can be briefly sampled in Iwan W. Morgan’s Beyond the Liberal Consensus: A Political History of the United States Since 1965.

The books listed here can all be borrowed from the Information and Research department. Contact them on 0113 37 87018 for more details.