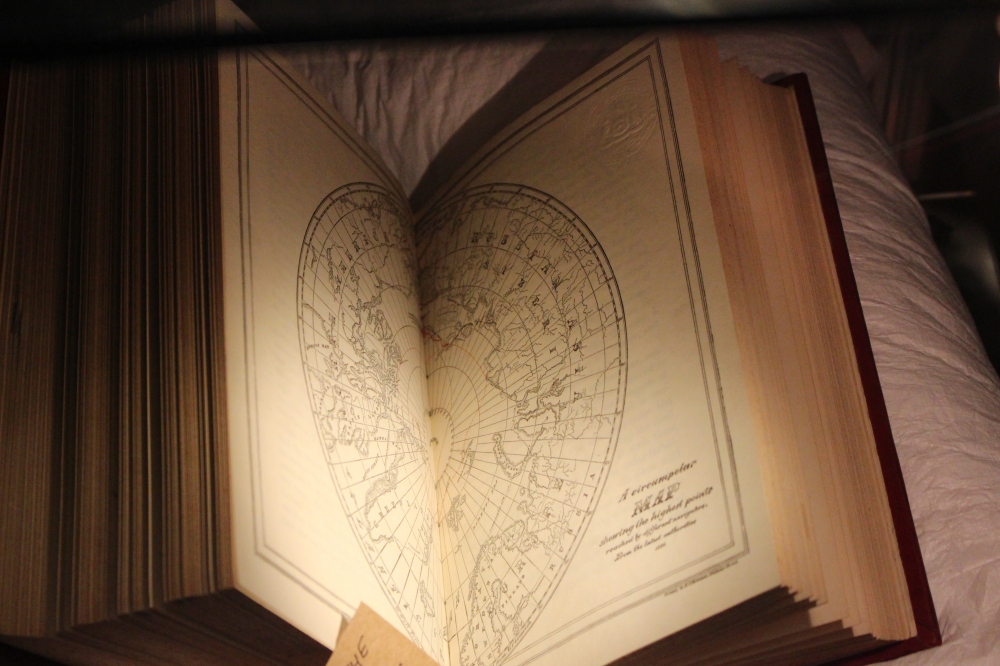 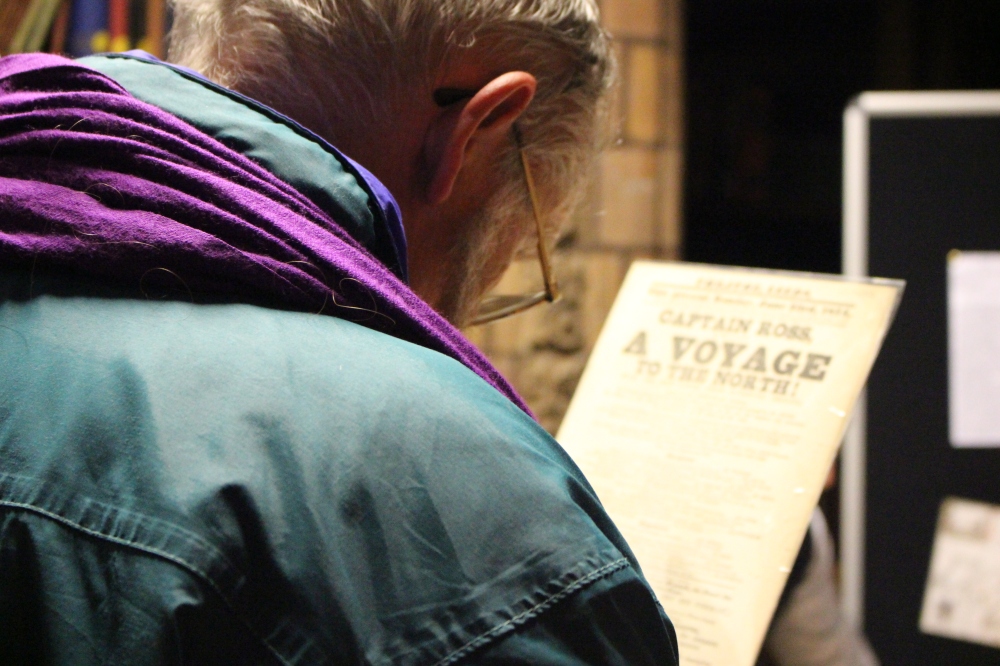 Thousands of people visited Leeds Central Library during this year’s Light Night celebrations and over two hundred of those experienced our interactive exhibition – or, as we thought of it: a multi-sensory storytelling experience – dedicated to four stories of loss and obsession in 19th and 20th-century exploration, all based around books available in our collections. For anyone who missed this very well-received event, here’s a chance to experience it through words and images:

Our intrepid ‘passengers’ started their journey in our boarding area. Here they were welcomed by our wonderful volunteer, Graham Smith, who encouraged each visitor to complete a mocked-up ‘boarding pass’ that reserved them a place on the next expedition. Then, once ‘aboard’, our groups were tasked with finding three intriguing books hidden in and among the card catalogue and the shelves of the collections in the Local and Family History department.

These books – which foreshadowed the later themes of the installation – were: volume 41 of the National Geographic journal, which outlined a surprisingly visual method of counting, as used by the Mayans; an account of some weird and wonderful Arctic iceberg ‘sculptures’; and the explorer Richard Burton’s translation of a 1753 document found in the Brazilian National Library, which tells of the (re)discovery of a mysterious lost city, deep in the Amazonian jungle; a city not seen again after that initial expedition and which launched a thousand fevered searches for its location across the ensuing centuries. 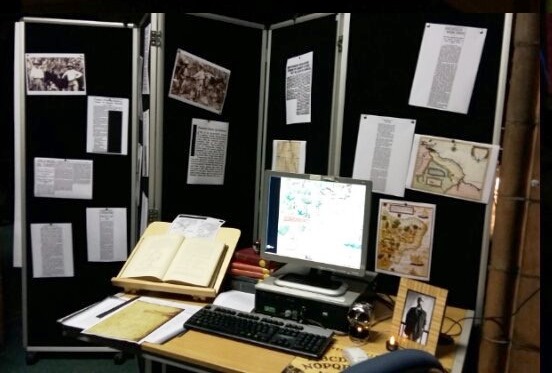 In this alcove we told the story of the famed British Explorer, Percy Fawcett, who went missing – along with his son Jack, and Jack’s friend Raleigh Rimmell, while searching for what Percy called the ‘Lost City of Z’. This ‘Z’ was the same city as described in the 1753 manuscript translated by Burton, and Fawcett believed it to have been the capital of an ancient American civilisation. Our installation was designed to invoke the poignant after-story of Percy’s wife, Nina. Alone and penniless in her grief, Nina turned increasingly to Spiritualism and the occult, employing a series of psychics and mediums to make contact with her missing husband and son. Nina’s desk is surrounded by images of maps and journal/newspaper articles detailing Percy’s disappearance and subsequent theories as to his whereabouts, while a presentation giving further background details played on the computer screen.

Books used to tell this story were Exploration Fawcett, a volume of Percy’s writings edited in the 1950s by his other son, Brian; and David Grann’s The Lost City of Z. Nina’s interest in the more extreme fringes of 19th and early 20th-century esoteric thought were represented by titles such as Madame Blavatsky’s The Secret Doctrine. Articles from the Geographic Journal, detailing Percy’s journey and disappearance were also present. 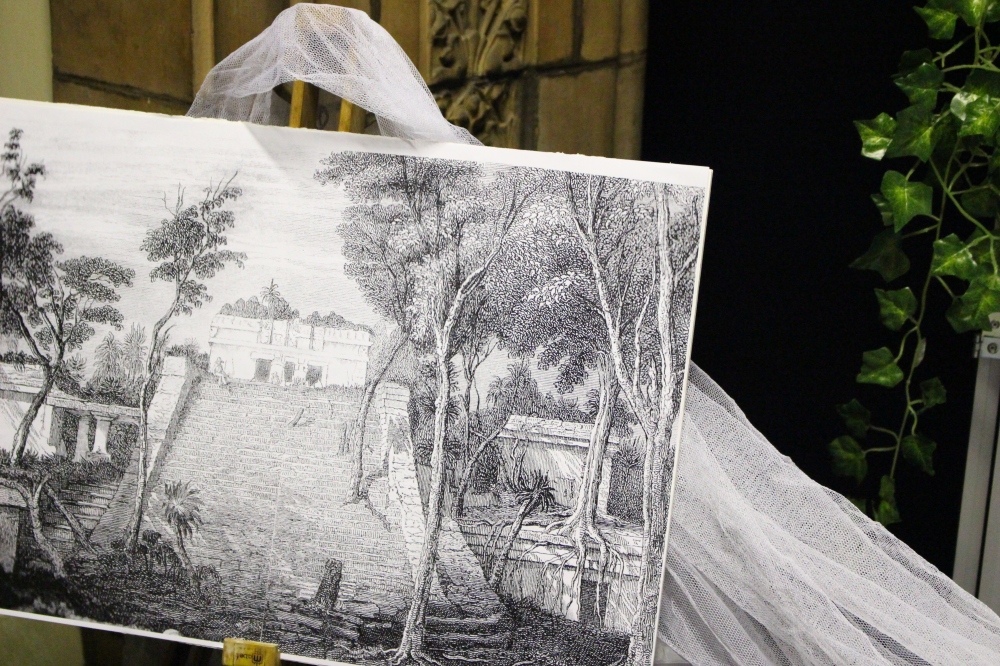 From a story about explorers who disappeared looking for a lost city, to the tale of two who found one: in the second alcove, visitors were told the story of two men – John Lloyd Stephens and Frederick Catherwood – who played a major role in launching the field of Mayan archaeology. Stephens, an American explorer, diplomat and writer; and Catherwood, a British artist, journeyed to Mexico in the early 1840s to record their impressions of Mayan ruins, even while those structures literally crumbled all around them. So determined were Stephens and Catherwood to permanently record what they saw that even the onset of malaria couldn’t stop their work: Catherwood continuing to sketch while protected by a mosquito net. Their achievements were recorded in their book Travels in Central America (two reference copies of which are available at the Central Library), a bestseller in its day and called “perhaps the greatest travel book ever written” by Edgar Allan Poe.

Our display included an easel featuring a facsimile of a Catherwood sketch, a copy of Fabio Bourbon’s The Lost City of the Mayas: The Life, Art and Discoveries of Frederick Catherwood – and a working microscope, together with a slide containing a real mosquito; a feature which evoked simultaneous feelings of fascination and revulsion in most visitors…

Lady Jane Franklin and the Search for Sir John Franklin

From the tropically-warm to the freezing-cold: our third alcove told the story of Lady Jane Franklin and her efforts to find out what happened to her husband, the explorer Sir John Franklin. In 1845, Sir John had captained two ships – the Erebus and the Terror – to the Arctic, in an attempt to find the fabled Northwest Passage. Sadly, his expedition vanished, with no word as to its whereabouts. Lady Jane – a fascinating figure in her own right, something of an outlier in 19th-century gender politics – raised sufficient money and support (from, among others, the US government and the British Navy) to fund numerous searches. One of those searches, by a man named John Rae, brought back evidence – leaked to The Times – that Franklin and his crew had all perished and that, shockingly, some had resorted to cannibalism in their final days. Feeling this to be an inhumane slur on her husband’s reputation, Lady Jane sent another expedition to (successfully) uncover contrary evidence; she then hired Charles Dickens to write an article refuting all the claims made against Sir John.

The Franklin story was told through a series of items intended to represent Lady Jane’s dressing room. These included an audio recording of a book based on Lady Jane’s life, a Victorian-era dress, a globe, a framed picture of her husband and copies of various letters sent and received by Lady Jane. Books and other material from our collections included accounts of Arctic exploration by expeditions sent to locate Sir John and, most interestingly, a map dating from 1849: addressed “to Lady Jane”, this shows the route of one such attempt to find her husband.

George De Long, Gordon Bennett and the Fate of the USS Jeanette

The ill-fated Franklin expedition attracted huge amounts of public attention in the mid-to-late 19th-century; and there wasn’t the same interest in any one Arctic exploration until thirty-three years later, when the USS Jeanette suffered a similar fate to that unfortunate earlier group. Setting sail in 1879, with the primary aim of finding the theorised Open Polar Sea (a variant on the earlier Northwest Passage) – and the secondary aim of finding Franklin’s ships – the USS Jeanette expedition was funded by James Gordon Bennett, the media tycoon who had sent Henry Stanley to “find” Dr Livingstone (who wasn’t actually lost) and, in doing so, had realised the value of creating, not just reporting, news.

Sadly, the Jeannette found itself trapped in crushing pack ice fairly early in its proposed route and the crew found themselves marooned a thousand miles north of Siberia with only the barest supplies and a seemingly impossible trek across the endless ice. Eventually, the party were separated by stormy weather during a crossing to the Siberian mainland; one group were rescued by the Evenks, a local people, but were unable to communicate the location of their colleagues. De Long and his party attempted to reach the nearest settlement but, faced with dwindling rations and the daily struggle with frostbite, sadly perished before a rescue expedition could reach them. However, De Long was a meticulous keeper of records and journals; these were later discovered and provided a wealth of information to scientists and other explorers about the climate and geography of the Arctic. 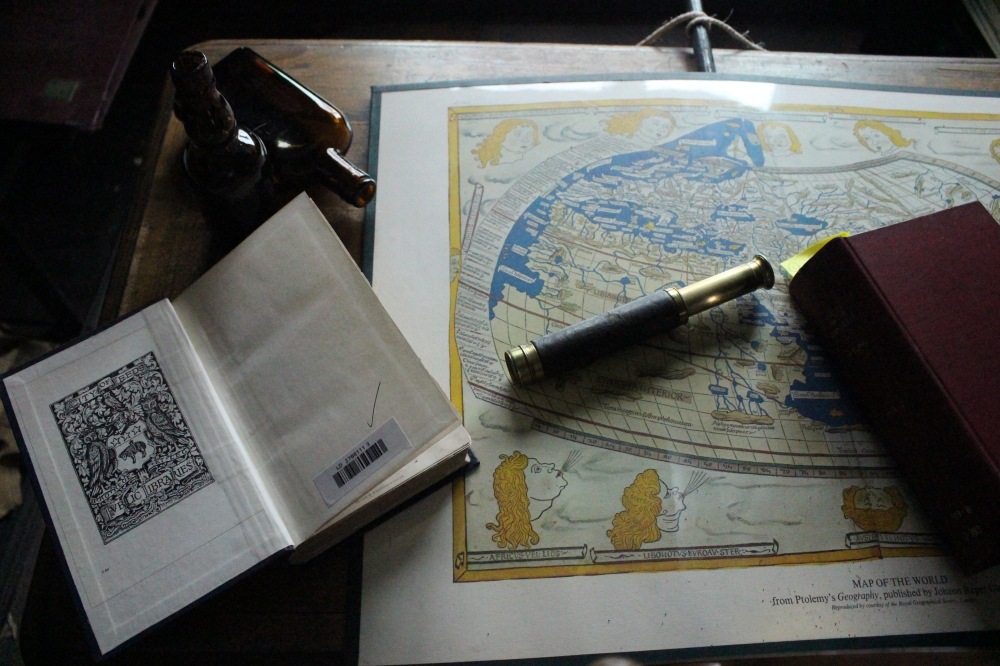 To represent the De Long story we created an impression of De Long’s cabin in the Local and Family History safe, with suitably atmospheric sound-effects of ice-breaking and dogs howling. A projector displayed images of De Long and his crew, while various props combined to add to the Arctic and nautical imagery and theme. All of this was based on books available at the Central Library, including De Long’s posthumously-published account of his epic journey.

We concluded our exploration by commenting on the heroism and bravery of those on these expeditions; and the manner in which their sacrifice brought positive, but usually unforeseen, benefits to the wider human tribe.

These stories were all told, or inspired, by books held in the Central Library collections; these are but a fraction of the total accounts of exploration available in the library service, however – and we finished by encouraging our listeners to take a deeper look at (to read more of) further stories of mystery and obsession contained within those pages…

Bibliography (all the books can be found at Central Library. Search our catalogue for more details)

For more on accounts of Arctic exploration held at Central Library, see this research guide. 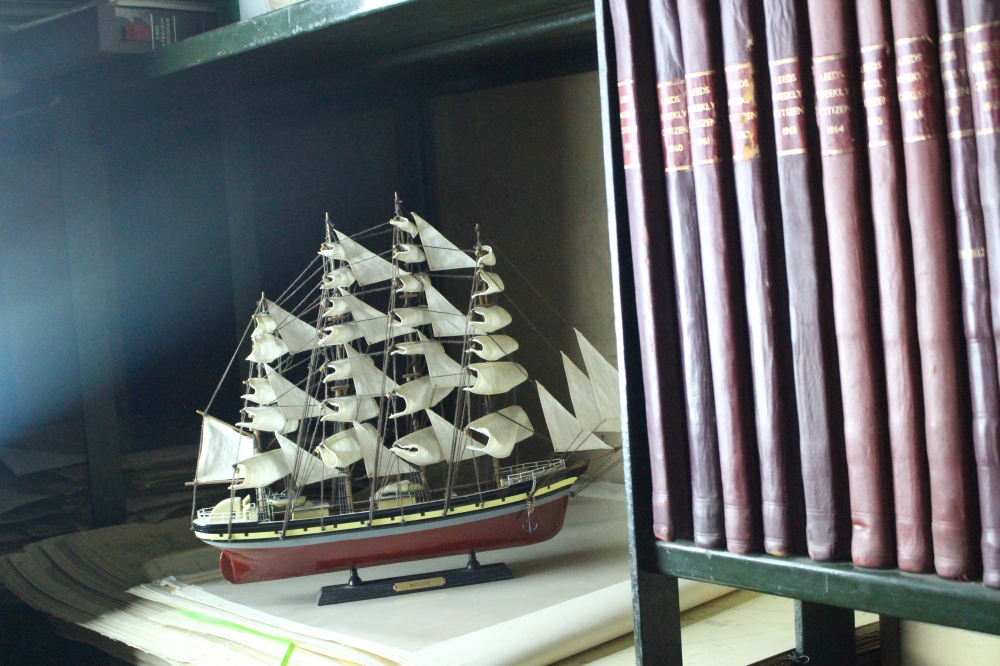