This week’s guest author on the Secret Library is Andrew McTominey, a PhD student at Leeds Beckett University, who is co-supervised at the University of Huddersfield and funded by the AHRC Heritage Consortium. His thesis focuses on the reservoirs of the Washburn Valley, which service the city of Leeds, and the social and cultural impact of their construction upon the area. This includes examining the effects of urban governance, landscape transformation, leisure, and community. He writes here on some eerie tales he has unearthed during his research…

From ‘trick or treat’ to putting on that scary movie, Halloween has a particularly strong resonance within people. The celebration of all things that go bump in the night has a long lineage – whilst the modern customs of Halloween were a largely American import, the Victorians in particular were interested in the Gothic and macabre. One of the most evocative scenes of spiritual haunting was the moors, which featured prominently in much Gothic literature, such as Arthur Conan Doyle’s The Hound of the Baskervilles (1902). However, one did not have to go to the vistas of Dartmoor for a fright, with moorland much closer to Leeds inspiring tales of ghosts and witchcraft. The Washburn Valley, which lies just north of Otley, was home to such tales. A relatively isolated area of Yorkshire until the construction of reservoirs for Leeds in the 1870s, the valley was a natural home to all sorts of odd occurrences, many of which were noted down by local historians and guidebook writers who sought to emphasise the mystique of the moors, in contrast to the technologically forward-looking urban town.

One such tale involves Swinsty Hall, the Tudor-era manor which now lays back from the banks of Swinsty Reservoir. The tale of the hall’s construction, recounted by William Grainge, a nineteenth-century historian of Yorkshire, began with a man named Robinson who, wanting to find his fortune, set out for London. Unbeknownst to him, the capital had been hit by the plague, leaving hundreds dead and homes uninhabited. For Robinson, however, this presented an opportunity, and he quickly took to looting the houses of the dead, amassing a great fortune that he packed onto a wagon to take back to the valley. News, though, had spread of his ill-gotten gains, and upon returning home his neighbours and friends refused to let him stay in their homes. This forced Robinson to buy a lot of land and build Swinsty Hall. In order to protect himself from the plague and the ghosts of his victims, he washed the gold in the Greenwell Spring. The well still stands, and at certain times it is said the ghost of Robinson appears, forever trying to wash the plague and his guilt off of his ill-gotten gains.

The second tale was retold by the writer Tom Bradley in his 1895 guide to the River Washburn, in which he explored the history and stories of the valley as he walked up the river. When he reached Timble Gill, near the hamlet of Timble, he retold the story of a man named Wardman who had been murdered by poachers, bludgeoned with the butt of a gun. In revenge, the ghost of Wardman decided to haunt Timble Gill. Due to his incessant nuisance-making, a public meeting was called in Timble, where it was decided that Wardman had to be laid to rest. To do this, they hired a priest, who used Wardman’s earthly naivety against him. Calling upon the ghost, the priest managed to persuade him that his activities were unprofitable and that he should rest with his wife, who had died some years earlier. He lit a candle and managed to get the ghost to promise to act in a civilised manner until the candle burnt out. The ghost, upon seeing the priest light a very short candle, agreed with a ‘spectral chuckle’, at which point the priest immediately dropped the candle into the beck and buried it in sand so that it would never burn out. Wardman realised he had been played by the priest, but, realising his ‘ghostly honour’ was at stake, he retreated and was never seen on Timble Gill again.

The final tale involves the Fairfax family, to whom the Civil War General Sir Thomas, Lord Fairfax was a member. Whilst the Fairfax family resided at Denton Hall, near Menston, this story regards Edward Fairfax, half-brother to Thomas, who lived at Newhall, which now largely resides under Swinsty Reservoir. The tale, again recorded by Bradley, involved supernatural meetings between Fairfax’s daughters and the forces of darkness, which Fairfax chronicled in his Daemonologia: A Discourse on Witchcraft…in the year 1621. One such encounter involved Fairfax’s eldest daughter Ellen and the Devil himself, who attempted to woo the young Fairfax, showing his anger at her rejection by cutting his horse’s head off. After this failure, he passed Ellen on to a group of witches from Fewston, from which point ‘she was constantly in trances and seeing things and hearing voices’. The witches that the Devil entrusted with this task were described by Bradley:

One was a deformed black thing with many feet the size of a cat, another was a cat spotted with black and answering to the name of Inges – this is a conclusive sign of witchcraft, because no cat of moral standing would own up to such a name.

Another accused woman was Peg Thorpe, who was purported to have met the Devil on the moor and sold her soul for forty years of superior magical ability. Thorpe was reputed to have said that there were as many as forty witches in Fewston, but only seven had special powers. Such was Fairfax’s outrage at the witches for the cursing of his daughters that he took them to the county assizes in York on two occasions, and both times the women were acquitted of witchcraft. Upon their acquittal, the women went to Timble Gill and feasted with the Devil to celebrate, dancing and toasting to their freedom at the expense of Fairfax. This feast was the last that was heard of the Witches of Fewston.

There are certain places that attract these types of stories and myths, such as York or the Tower of London. Rural areas, especially moors, also become associated with these stories, places that are shrouded in mystery and obscurity, often because they are isolated. Not only is there an external shroud, but when you are there, it is easy to get spooked when there is no one for miles around you. These tales had an endurance, recorded by people like Grainge and Bradley on the cusp of the twentieth century. Indeed, the tale of Swinsty Hall has featured on the websites of The Yorkshire Evening Post and the Harrogate Advertiser in recent times. Part of this endurance is that these stories are, at least minimally, based in truth. The building of Swinsty Hall was financed by a money lender called Henry Robinson; Fairfax’s daughters were afflicted by illnesses that would be now be medically termed. However, the mythology of these stories endure because they could be believable. It is not hard to imagine hearing the cackling of witches or the spectral scrubbing of Robinson in the wind during a night-time stroll over the dark and lonely moors of the Washburn Valley…

Both are available from the Local and Family History department in Leeds Central Library. 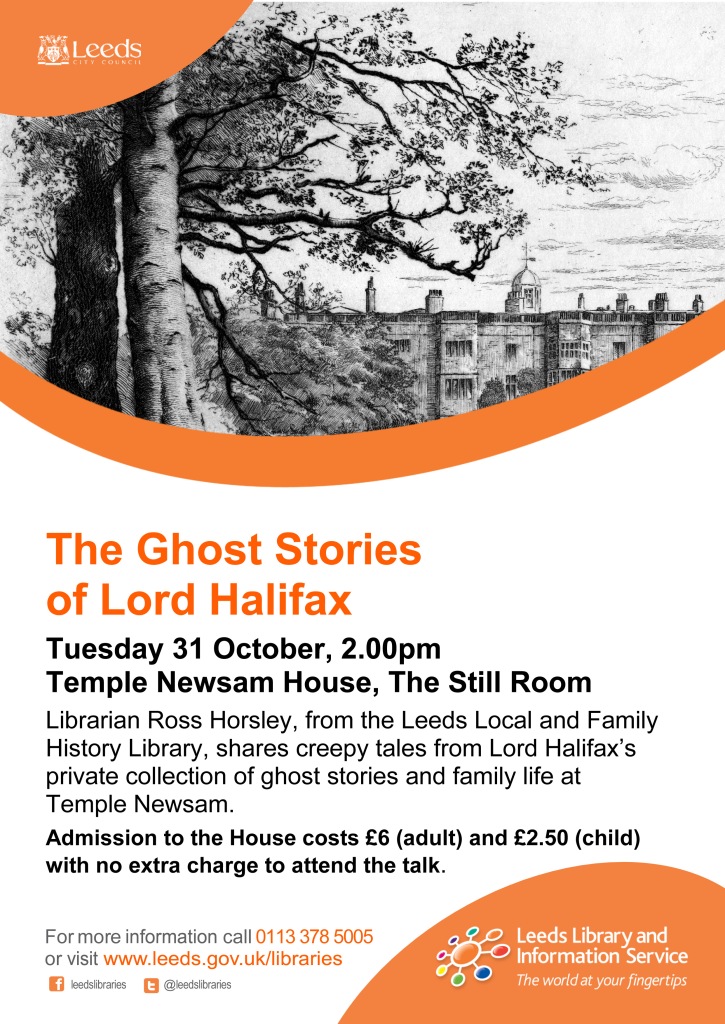