Antony Ramm, local history Librarian, takes a brief look at an incident in the life of George Lucas, Temperance campaigner in 1850s Woodhouse. This article is also #17 in our People of Leeds series.

In the mid-19th-century, the dark side of alcohol was well known to contemporaries; specifically, the damage excessive drinking caused working-class individuals and communities. But even as the darkness rose, there was a light to meet it: the Temperance, or teetotal, movement. Advocating total abstinence from drink, Temperance developed as a self-motivated tool for ‘improvement’ – ‘self-help‘ – a way of proving respectability and responsibility to apparent social betters. As with the related Chartist movement for political reform, Temperance was a national crusade with a distinct Leeds character: the Reverend Jabez Tunnicliff launching his influential Band of Hope organisation in the town, at Bridge End in 1847.

George Lucas of Woodhouse, born 1819, was one Leeds man converted to the cause, taking the teetotal pledge as early as 1837. Lucas’ commitment to the Temperance cause was such that he rose to become Secretary of the Woodhouse Temperance Society, a role carried out with an impressively intense seriousness. Working to convert as many friends, family and neighbours as he could, Lucas saw temperance as “more than a matter of health”, but rather a way out of poverty: “a matter of saving money which would be better spent on education, clothing, food and rent.” These were points Lucas would repeatedly make on the ‘speaker’s square’ of Woodhouse Moor: “On these anyone had the right to get up and speak…[i]t was of great value to the temperance people for spreading their ideas. They were heckled and shouted at by those primed with beer in the nearby pubs…”

Such work in the Woodhouse neighbourhood – providing a new hope for its denizens, which included educational classes using a small library of books provided by Lucas – soon attracted the attention of the Reverend James Fawcett, the vicar of the local St. Mark’s Church. Fawcett had a bad feeling about the Temperance movement (particularly their recruiting for new members on a Sunday) and, in a speech to the Feather Hill Children’s Sick Club – printed in the Leeds Intelligencer on the 18th of January, 1851 – he strongly criticised the Woodhouse Society’s efforts (click on the image to read the whole article): 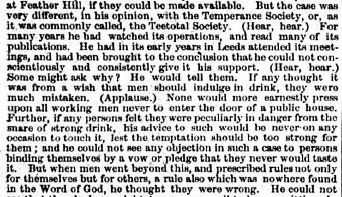 Lucas found Fawcett’s lack of faith disturbing and a few weeks later he responded in print, with the publication of his Letter to the Rev. James Fawcett, Incumbent of St. Mark’s Church, Woodhouse; Being a Reply to Various Charges Made by Him Against Teetotalism and Teetotalers, with Observations on Other Matters. In this pamphlet – a copy of which is available in the Local and Family History department of our Central Library – Lucas meets each of Fawcett’s objections in turn: denouncing and exposing their philosophical contradictions in a furious attack that – from a certain point of view, at least – will convince almost any reader the merits of the teetotal approach: impressive…most impressive.

In his final pages, Lucas broadens his assault on Fawcett; providing a contextual background for the Woodhouse Temperance Society’s efforts and, in particular, its reputation as a wretched hive of scum and villainy in the 1840s and 1850s –

– before connecting those conditions to the apparent failure of Fawcett and his Church to produce “even a single drunkard whom you have been the instrument of reforming”:

Such explicit criticism of the Church’s local kingdom must have taken a lot of guts from Lucas; and perhaps it was with the intention of further avoiding such imperial entanglements that he left Leeds in 1853, moving to Darlington and taking up a new role following the merging of the Leeds and Thirsk Railway with several Newcastle companies. We can only imagine that Fawcett took great pleasure in the manner with which his religious empire struck back against the rebel alliance of the Woodhouse Temperance movement.

But Lucas left the force of Temperance in Woodhouse with a powerful weapon; a hidden base that would act as a shining light for the working-class of the neighbourhood. That was the construction in 1850-51 of the Woodhouse Temperance Society and Mechanics’ Institute Hall on Institution Street, which opened just a few weeks after the Fawcett-Lucas dispute. Paid for by subscription, with foundations dug out by its members in their spare time, the Hall became a fully-operational; “social centre for Woodhouse…[t]he centre for a football team, a cricket team, for gospel temperance meetings and a trades’ school.”

That is to say: in providing a space, a centre, for such vital community action – which the building still does today – Lucas left behind a symbol representing something genuinely positive; something the likes of Fawcett, with his privileged condescension and his narrow, dogmatic view of social responsibility, could never truly provide for the men and women of Woodhouse: Lucas offered hope.

Bibliography (all available at the Central Library)

With “help” from Lawrence Kasdan, Leigh Brackett and the other George Lucas.