Librarians in the Local and Family History department of the Central Library recently curated a small display of books and other stock showcasing the rich tradition of radical politics in 19th-century Leeds. That display has now come to an end, but we reproduce below the exhibition’s descriptive text cards, along with some sample images of the relevant stock. Please contact either the Local and Family History or Information and Research departments to access any of the books mentioned below. You can also browse a more wide-ranging guide to our collections exploring 19th-century Leeds politics. Finally, a very informative article about the events at Peterloo, in the August edition of History Today is available to read in the aforementioned Information and Research department.

Leeds Radicalism to 1832
Leeds was second only to Manchester as a hot-bed of early 19th-century political radicalism. In his autobiography, James Watson records attending a meeting of Radical Reformers at Union Court off Briggate in the Autumn of 1818.

A contemporary newspaper article from the Leeds Mercury shows the strength and depth of feeling in the town, as 30,000 people attended a demonstration in support of the victims at Peterloo. Speaking at that march was Isabella Blackburn, who delivered an inspiring ‘Address of the Female Reformers of Leeds to Their Townsmen’.

By 1821, however, radicalism in Leeds had experienced a bitter split, between the supporters of Henry Hunt’s parliamentary reform and those of Richard Carlile’s more revolutionary ‘Painite’ approach to constitutional change – this split being the subject of Carlile’s pamphlet An Effort to Set At Rest Some Little Disputes and Misunderstandings Between the Reformers of Leeds, Upon the Subject of Some Late Deputy Meetings And A Declaration of Sentiments Arising Therefrom 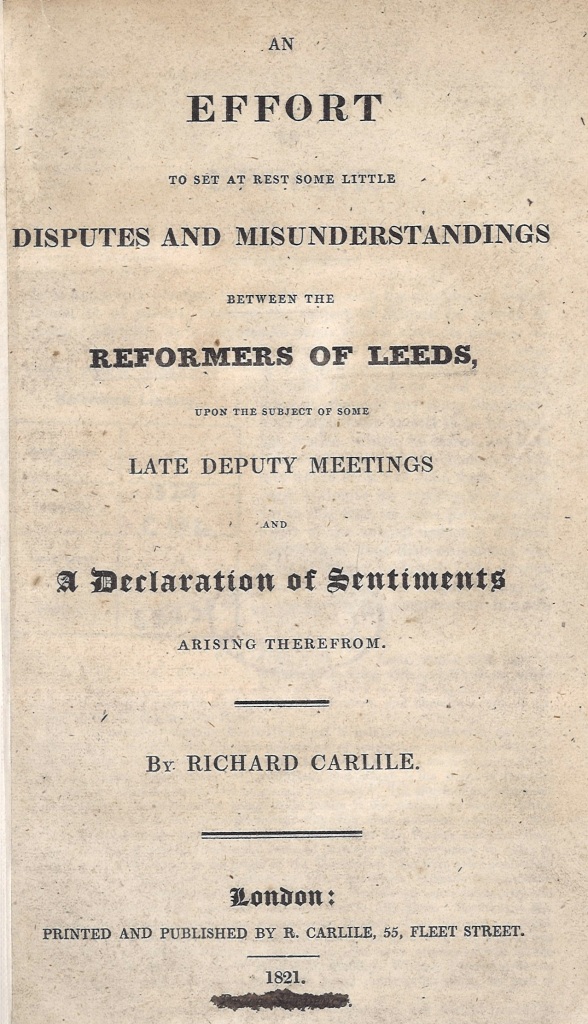 By 1829 activity had died down, only to be revived with the formation of new organisations – including the Leeds Radical Political Union, whose formative resolution book of 1831 can be seen below, alongside a satirical book published by one of the men active in that group: the bookseller, James Mann.

Mann – reckoned by E.P. Thompson to have been the same ‘Mann’ who wrote a letter about Luddite success in 1812 to the Lancastrian informer ‘B’* – worked alongside John Foster in the Leeds Radical Political Union. Foster was also the editor and publisher of the leading radical newspaper in Leeds during this period: the Leeds Patriot.

The fear and panic these radical activities and publications engendered among social elites is clear from the middle publication on the shelf above: the Reformer’s Guide of 1819, a kind of 19th-century attempt at fake news, designed to undermine radicalism and its adherents: “A radical reform means complete revolution…[i]t’s features are pillage, murder, and massacre.”

The early 1830s were critical in the development of politics more broadly in Leeds, as mainstream Liberals – such as the Baines family (editors of the Leeds Mercury, as well as political leaders in their own right) – concentrated their efforts on the campaign for the 1832 Reform Bill, a meeting in favour of which can be seen in the engraving below. In doing so, Leeds Liberals drove a wedge between their relatively ‘conservative’ reform efforts and the campaigns of their more radical townsmen.

Mann, Foster and their fellow members of the Leeds Radical Political Union thus broke with Baines and his middle-class Liberal followers in the early 1830s, seeing “the ballot, universal suffrage and annual Parliaments” as more important than the “limited” Reform Bill of 1832.

Alongside, these radicals also prioritised factory reform to “ameliorate working-class conditions”. As a result, they found themselves making a surprising alliance with the Tory candidate at the 1832 General Election – Michael Thomas Sadler, who had sponsored the Ten Hours Bill of the same year (a Bill designed to reduce labour hours for children).**

Seen below are two political handbills from that 1832 election, both declaring support for Sadler from working men. We can also read an extract from Richard Oastler’s famous Four Open Letters to Edward Baines, Esq., M.P. on “Slavery in Yorkshire” – which condemns Baines and local industrialists for their hypocritical approach to liberty. Further evidence for the contempt with which Leeds radicals held Baines is William Rider’s bitingly satirical The Demagogue (1834), a spoof autobiography of the Mercury editor and Leeds M.P. (Rider was secretary of the Radical Political Union).

Leeds Radicalism post-1832
James Mann died during the cholera epidemic that swept Leeds during 1832; his publishing and bookselling business – based at the Central Market on Duncan Street – was inherited by his widow, Alice. Alice continued publishing radical material, as well as more mainstream works – seen below is an extract from just one such A.Mann publication: the 1842 Improvement Act for Leeds (further biographical details about the fascinating figure of Alice Mann can be found in a separate article). 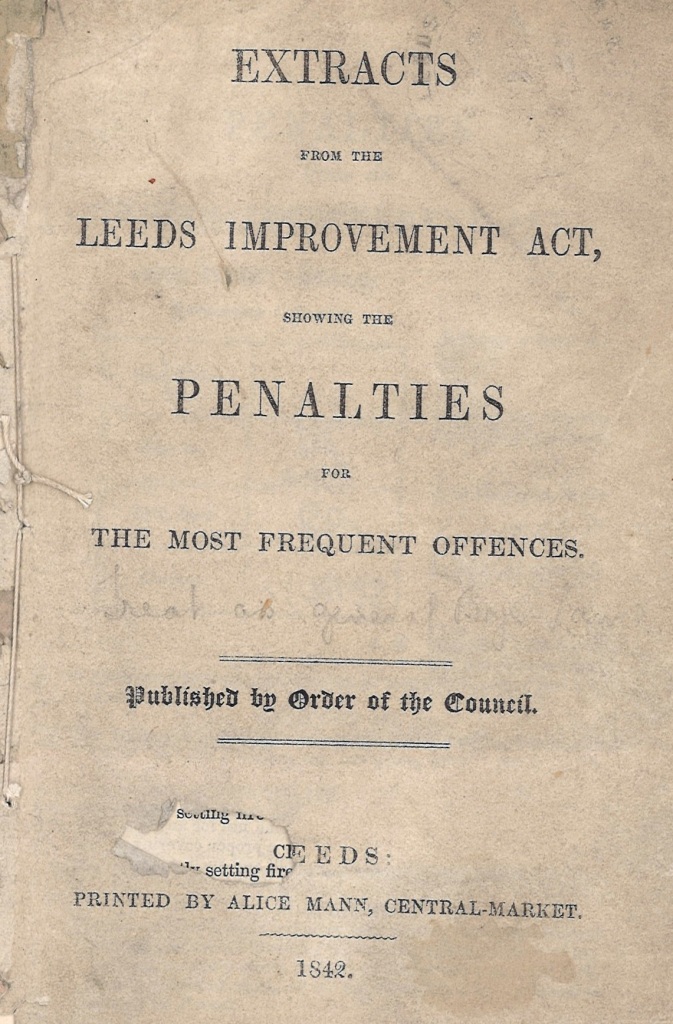 Alongside Mann’s publication is the most important book by another key Leeds working-class radicals of the post-1832 period: John Francis Bray. Bray’s Labour’s Wrongs and Labour’s Remedy (1837) has been called “striking proof of the quality of the best contemporary working-class thought” and was later utilised by Karl Marx in his Poverty of Philosophy***. The book was published by David Green, a Briggate bookseller, who was another important figure in Leeds radical politics.

It has been speculated that Alice Mann entered into a business partnership with Joshua Hobson, the Huddersfield-born radical who was also active in Leeds during this period. Hobson’s book Socialism as it is! (1838) can be seen below.

Hobson was also responsible for publishing the Chartist newspaper Northern Star in Leeds from 1847 to 1844, and played a crucial role in that movement, which emerged during the later 1830s. Hobson was also a defender in print of Owenite socialism, as was another Leeds Chartist: Dr. Frederick Richard Lees, whose book in defence of the Owenite movement can be seen below, alongside one contemporary reactions to Chartist activity in Leeds, in the form of (photocopied) letters written from Leedsin 1842.

Chartist-Radicalism somewhat subsided in Leeds from 1843, re-emerging in 1848. Joseph Barker was a key figure: his ‘ultra-democratic’ and Republican journal The People was printed and published in Wortley from 1848-51. Barker and other Chartists in Leeds adopted the movement known as ‘Municipal Chartism,’ standing for election to local government.

Among those elected as local councillors were the aforementioned F.R. Lees, as well as Robert Meek Carter: both Lees and Carter later campaigned (the latter successfully) for election as an M.P. for Leeds in the 1860s and 1870s. In 1880, another Leeds-based radical, John De Morgan, also made that same attempt – a copy of De Morgan’s self-published Leeds journal, De Morgan’s Weekly, can be seen below, alongside several political cartoons satirising Carter, Lees, De Morgan and various other parliamentary political candidates in Leeds at that time.