This week, Philip Wilde explores some of the more unusual items held in our vast Collections. You can see a full display of the stock mentioned here outside the Information and Research department of the Central Library.

The Special Collections here at Leeds Central Library comprises of some 17,000 items. The vast majority, of course, are books. However, the collection holds much more than books. Here we shall talk about just a few of the items which you might not expect to find in a library. 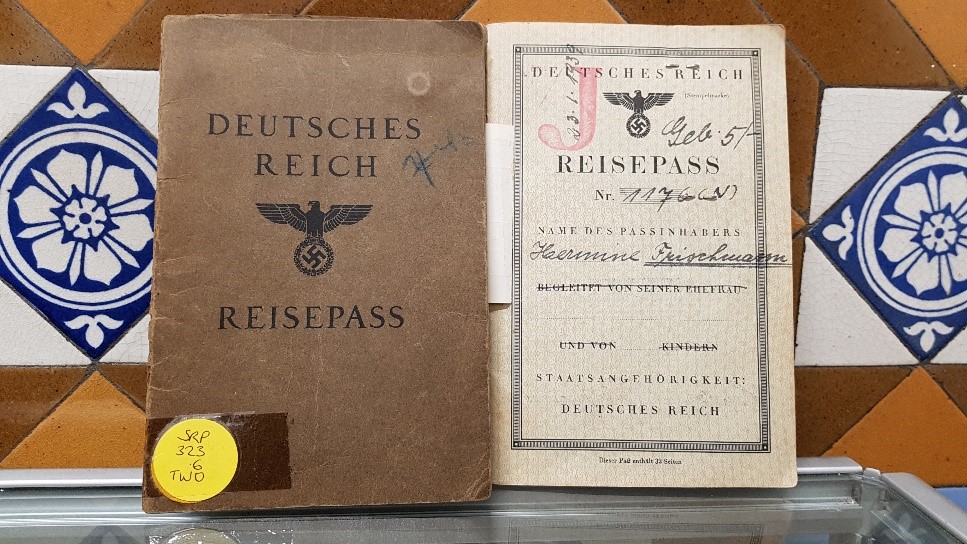 Donated to the library in 1984 these two German passports belonged to Mr Karl Ott and Miss Hermine Frischmann, two German Jews who were among the fortunate few who managed to escape to England where together they landed at Newhaven on 22 February 1939. The visas in the passports clearly show the route they had to take through Europe in order to reach safety. Earlier, on October 5, 1938, the Reich Ministry of the Interior invalidated all German passports held by Jews. These had to be surrendered and would only become valid after a bold letter “J” – Juden – in red had been stamped on them.

Upon arrival at Newhaven both passports are stamped with a visa which states that neither of them were allowed to work except as servants in private houses.

These passports are currently on-loan to another exhibition and have been replaced in the IAR display with the following item. 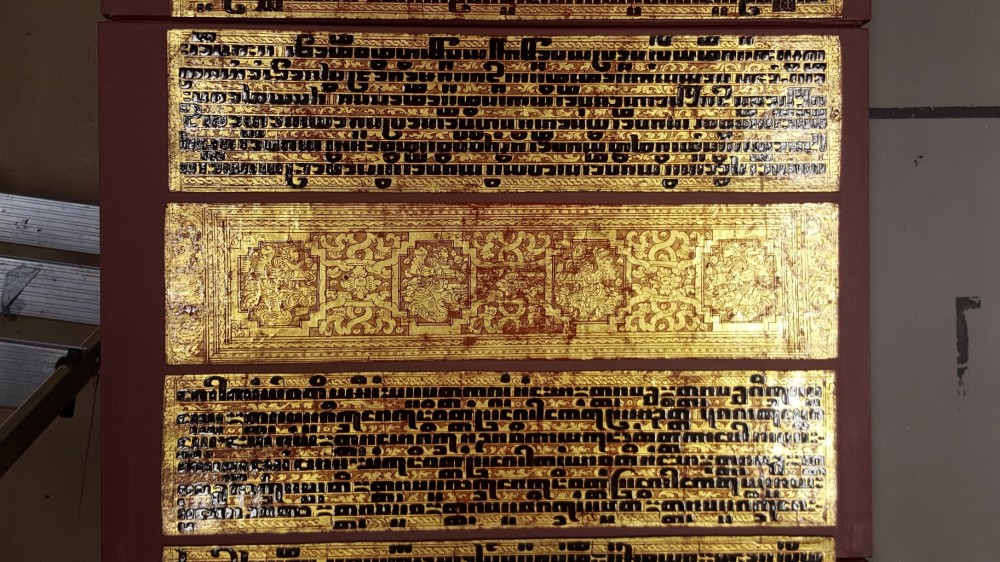 In 1887 Mr George H. Colbeck, S.P.G. [Society for the Propagation of the Gospel] missionary to Upper Burma, gave to the Leeds Free Library a copy of the Kammavaca. Consisting of sixteen leaves of lacquered board “pages” this Burmese “book” contains the prescribed ceremonial for the ordaining of Buddhist monks.

The Kammavaca is a highly ornamental type of manuscript usually commissioned by families whose sons were to enter the Buddhist Order as a novice or to become ordained as a monk. At which time the Kammavaca would then be presented to the monastery.

These manuscripts were written on a variety of materials. This might be palm leaf, stiffened cloth, or gold, silver, metal or ivory sheets. These are then coated with lacquer and gilded decoration. It is sometimes claimed the boards were “made out of the putsoes or dresses of the Kings of Burmah”.

Possibly Eighteenth-century, but more likely to be Nineteenth, our Kammavaca manuscript is written in Pali in Burmese square script.

The President’s Badge was presented to the library along with the minutes of the meetings of the AYB (Association of Yorkshire Bookmen.) 1943-1965 and 1965-1979 by Miss W. M. Heap. We believe she was secretary for the AYB.

The badge is held in a presentation box inside of which there is a note written by the famous Yorkshire author, Phyllis Bentley that says: “This Presidents Badge is the property of the Association of Yorkshire Bookmen”, signed and dated July 2, 1955. The back is inscribed: Presented by Mrs M. Gunter, July 2nd 1955

The meetings of the Association of Yorkshire Bookmen took place within Leeds Central Library.

Printed in England, published by the Oxford University Press (American Branch) New York in 1911 and billed as “The smallest Bible in the World” this is a complete copy of the Old and New Testaments which “can easily be read with a magnifying glass”.

It consists of an oak miniature lectern, miniature Holy Bible and magnifying glass, which is set in leather. It fits into a pocket at the front of the Bible. Not too much larger than a pound coin the pages are in fine India paper and the print is almost impossible to read without the use of the magnifying glass. There are several full page woodcut illustrations throughout and it has 876 numbered pages.

Bibles and other rare and precious books would often be chained in order to prevent them going missing.

The Wings for Victory Weeks were held across the country in 1943, from March onwards, to raise money by, among other ways, encouraging civilians to save with War Bonds. In Leeds the event was held 26 June – 3 July of that year where there was a public appeal to raise a minimum of £5 million pounds to provide aeroplanes for the war effort. The people of Leeds did more than that and raised £7, 203, 768 – “Representing the cost of 100 x 4 engined bombers & 200 Fighter planes.”

24 aircraft log books were presented to Leeds as a tribute to the success achieved by the Savings Committee in the Wings for Victory campaign. Making poignant reading these log books were donated to Leeds Central Library, many of which record the flight details of missions that were to end with the aircraft either missing or crashed. 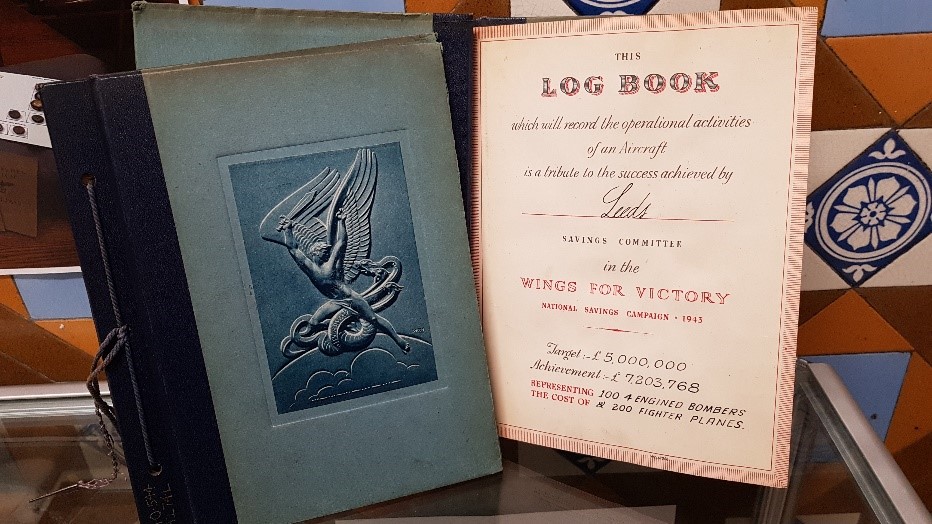 This bottle contained items relating to the 2nd West Riding of Yorkshire Engineer Volunteers (Royal Corps of Signals) and to Gibraltar Barracks.

The contents (kept separately) include: A copy of “The history of the 2nd West Riding of Yorkshire Engineer volunteers”, [published in Leeds June 21st 1887 by Julian Green]; Copies of the Leeds Mercury & the Yorkshire Post for Saturday August 17, 1889 containing articles re the volunteers; 1 large floor plan with details of “West Yorkshire volunteers additions & alterations to the headquarters, 1889.”; Manuscript listing “Roll of officers now serving” & “Officers who have left the Corp” [from 1861]. At the foot of this is a note regarding the laying of the foundation stone “by Mrs Dawson of Weston Hall, Otley on 17 August 1889, wife of the Commanding officer.”

Five Hannahs of Leeds is a collection of photographs, newspaper clippings, letters and other items collected by Constance Frost, a descendant of one of the Hannahs. These give an account of Hannah Holmes and her descendants Hannah Spurr, Hannah Smith, Hannah Hartley and Hannah Frost covering the period c.1820-c.1973.

Included in the collection is this policeman’s truncheon of which Constance says: “…..was used by great grandfather Smith at the time of the Chartist riots. When I first remember it there was a leather thong which I suppose perished & was replaced by the piece of wire”.

The Special Collections here at Leeds Central Library hold a number of video and cassette tapes (but nothing to play them on!) These include items such as six reels of sound recordings of the twinning ceremony of Leeds and Dortmund, in 1969, and Children’s games, songs and customs in Leeds by author and poet Rowland Kellett.  The picture shows a ‘Videocassette’ from 1977. A Library Association Yorkshire Branch video, ‘Much More than Books’, and an EMI ‘Magnetic Recording Tape’ of the opening by the Queen at the Centenary of the Leeds Music Festival on 17/18th October, 1958.

Seen here are a few of the ten sample cards contained within a lever arch folder compiled by the British Button Council and dating from the 1950s. These cards show different colour and pattern configurations for casein, metal and metalized, leather, horn and nylon plastic buttons as well as examples examples of the separate stages of manufacture. 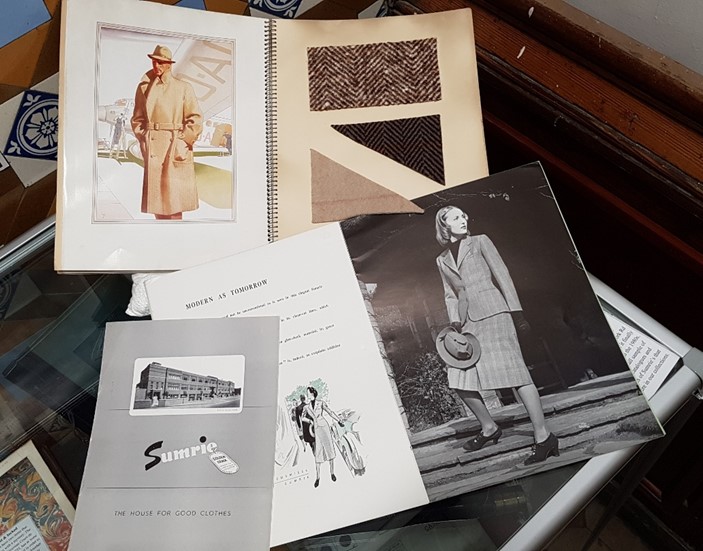 Charles and Carl Sumrie, born in the 1890s started a tailor’s shop in Leeds during the First World War. By 1920 the firm C. & M. Sumrie had been established and was producing high quality garments. ‘House of Sumrie’, first operated from two adjoining terraced houses on Claypit Lane. In 1932 they moved to their showpiece building, Sumrie House in York Road where they remained until the firm was eventually bought out in 1982. After more than sixty years C. & M. Sumrie ceased to exist. Leeds Central Library has a number of items related to the company including clothing catalogues, pattern books, correspondence and ephemera – several of which contain original pieces of sample textiles.

Two items from our collections present us with a tantalising glimpse of what might have been in one case and what could be in the other.

The first item is a copy of Nouveau Cours de Mathematique, by Bernard Forest de Bélidor (1725). This book has at some time been hollowed out. It contains a note that suggest that at some time the space was occupied by another unnamed book that seems to have disappeared long ago. One can only guess at what the unknown book was and why it was important enough to hide it within another book.  Did it perhaps record the secret meetings of two lovers? Or was it merely to hide something as mundane as an accounts book? Was it really a hiding place for jewellery or a gun perhaps? One could really speculate forever.

The second item is an innocent looking copy of Edward Parsons’ 1834 History of Leeds. However, this copy has a lock upon it for which we have no key. What little bit of probing is possible appears to suggest that there is nothing behind the lock, but precisely what it is – the pages of a book. A lock upon a diary or some such private work would be entirely understandable, but why put such a substantial lock on a seemingly ordinary book?

Just as a matter of interest it is worth mentioning at this point that another item in our special collections also had a substantial lock such as the one mentioned above. This is the Autograph book of Francis Dighton. In this case though the lock has been forced at some point in the past revealing some fascinating and highly interesting material.

Francis Dighton was the Private Secretary of Prince Frederick, Duke of York and second son of King George III. The book is a collection of autographs, letters, fragments etc. collected by Dighton for his cousin Anna Leighton, née Dighton. This includes letters and fragments of letters from such as George III, George IV, Prince Edward, Charlotte, wife of George III, Lord Clyde, Sir Walter Scott and many other literary, military and political figures of the period. I hope to expand upon this in a further blog for the Secret Leeds Library in the future.

As a taste of some of the things we might expect I include here a copy of one of the fragments in the book. This is Canto the second, verse LXXXVIII (88), written by and in the hand of George Gordon, Lord Byron from his epic poem, Childe Harold’s Pilgrimage.

Where’er we tread ’tis haunted, holy ground,
No earth of thine is lost in vulgar mould,
But one vast realm of wonder spreads around,
And all the Muse’s tales seem truly told,
Till the sense aches with gazing to behold
The scenes our earliest dreams have dwelt upon:
Each hill and dale, each deepening glen and wold
Defies the power which crush’d thy temples gone:
Age shakes Athena’s tower, but spares gray Marathon.

To access any of the items referred to in this article, please contact the Information and Research department.