Clothing Strike (1970)
Westgate and Great George Street
In February 1970, textile workers in Leeds began an unofficial strike in support of their demand for a shilling an hour pay increase. The strike snowballed, with workers attracting further support as they marched from clothing factory to clothing factory – until more than 20,000 people were involved, the majority of them women. The strike originated at the John Collier Ltd. factories in Kirkstall; from there workers marched into Leeds, where they gathered supporters at Headrow Clothes on Westgate and Marlbeck Fashions, near St. George’s Crypt, before proceeding further into the city centre. The strike lasted around 2-weeks.

Further information and sources
In contrast to several other points on the Power and Protest trail, the 1970 Clothing Strike is rich in contemporary sources, for those who wish to explore the story in more detail. These mainly include newspaper articles that trace developments day-by-day – a folder containing all Yorkshire Evening Post articles across the two-weeks of the strike can be accessed in the Local and Family History department (all the articles have been accessed using the department’s newspaper collection). A sample article from the beginning of the strike can be seen below:

That folder also includes copies of secondary sources presenting events in a narrative form, including the relevant chapter in Katrina Honeyman’s Well-Suited: A History of the Leeds Clothing Industry, 1850-1990, which situates the strike in the longer history of Leeds as a textile centre, and two articles by Daniel Chapman.

Other Central Library collection items of interest to students of the strike include a 1974 Radio Times article by Gordon Burn: you can read more about that, and several other ephemeral pieces elsewhere on the Secret Library blog.

Also elsewhere on this website is a short article looking at a 1967 map of Leeds City Centre, part of the Local and Family History department’s extensive map collection. That map is sufficiently detailed to show the usage of many buildings, not least the plethora of clothing factories. It provides a useful visual aid for anyone wishing to appreciate the full extent of the 1970 clothing strike. The extract below shows the Westgate and Great George Street area: 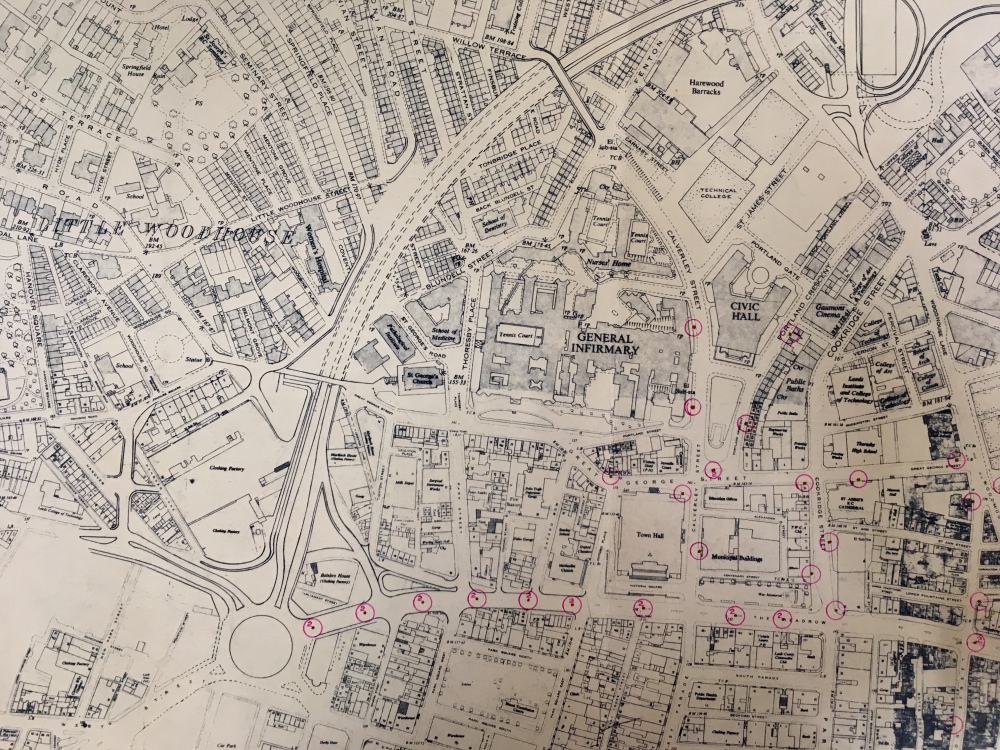 More generally, and also in the visual field, are photographs of Leeds in the broader 1970s – which can be found on our Leodis archive of historical images.

Please contact the Local and Family History  or Information and Research departments to access any of the resources mentioned here.