This is one of the rare books in the collections that is really a pleasure to look at and read. William Muir’s reproductions of William Blake’s Songs of Innocence and Experience (1885) are enveloped in green slipcases with original soft, blue wrappers that make clear in orange ink that they are only one of 50 copies to have been produced. Inside are hand coloured plates, 28 in Innocence and 22 in Experience, protected by delicate tissue guards. Muir’s own inscription can even be found at the back. All of this making us feel like we really do have a special book in our hands! 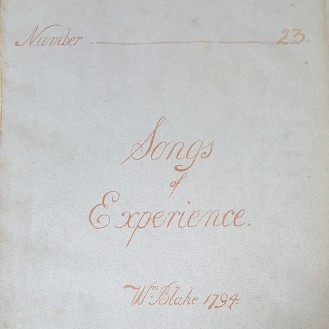 Muir’s facsimiles were the first full coloured copies of Blake’s work to have been made and according to G. Bentley ‘until the Blake Trust began publishing Blake facsimiles in 1951, Muir’s facsimiles were often the only colour reproductions available’.[1]Other reprints deviated so much from Blake’s originals that readers often had no idea about Blake’s ‘illuminated printing’, the stunning combination of image and text, which seems so integral to his poetry.

So who was William Muir? He was born in Glasgow in 1845 and moved to the Inner Hebrides to become a quarry manager. He then moved to London where his occupation was stated as ‘granite agent’, perhaps not the first job you would associate with the person making these delicate books!  However, Muir must have had a real passion for Blake’s work and it is assumed that it is through his granite business that he became acquainted with Queen Victoria’s nephew Count Gleichen who had devoted himself to the arts after a career in the navy and taken up making sculptures. Muir describes Gleichen as his patron and dedicates his work to him.

Muir established the Blake Press at Edmonton and states that his,

‘desire and intention is to reproduce ALL the important works by Wm Blake that exist in book form and also some of his finest designs and this by methods of working as nearly the same as Blake himself used as the need of maintaining fidelity to his results will allow. I will not use either photography or chromolithography. All outlines are drawn and all the colouring is by hand. I produce fifty copies only of each book and each of them is numbered’. 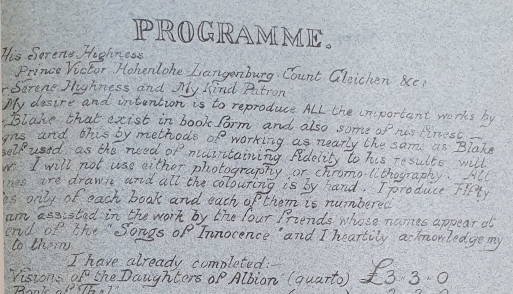 This really was such an ambitious undertaking and although not exact copies of Blake’s work it has been argued that ‘Muir’s productions capture something of the spirit of the originals, their various textures and hand-made craftsmanship, better than any photographic reproductions’,[2] which has led them to be mistaken for originals in the past.

The full fifty copies of each work sometimes took decades to complete as Muir only coloured, and perhaps printed, a handful of copies at a time. This was a painstaking process which attests to the passion and dedication Muir had for this project. It was only at 90 years of age when his eyesight began to fail that he had to give up working on the Blake facsimiles.

Keri Davies explains the impact of his work saying, ‘Muir’s facsimiles not only made Blake’s works in “Illuminated Printing” accessible for the first time in reliable copies and helped establish Blake’s reputation as visual artist alongside his reputation as poet, but I feel must also have contributed to the most advanced ideas in English art of the 1880s.’[3]

As it is the anniversary of William Blake’s death next week, on the 12th August, it seemed like a good time to remember the work of the poet and artist who was largely unrecognised in his own lifetime, as well as Muir who dedicated so much of his life reconnecting people with the art that is so well loved today.