The garden in front of the Civic Hall was laid out in 1983 and dedicated to Nelson Mandela in support of his anti-apartheid movement, the dedication ceremony took place on 10th December 1983 while Mandela was still serving a sentence at Pollsmore Prison, Cape Town. It was here in 1994 that celebrations took place as South Africa held its first democratic election, with Mandela becoming the country’s first black president

In 2000 the area in front of the Civic Hall was redeveloped in Millennium Square and the Mandela Gardens was reimagined by city Architect John Thorpe into the space at the bottom of the square adjoining Great George Street. The new gardens included a water feature and stone seating alongside a bronze sculpture by Kenneth Armitage (b.1916 Leeds) entitled ‘Both Arms’, at 16 feet high the bronze cast sculpture is designed to convey a friendly, welcoming atmosphere.

On April 30th, 2001 the gardens were rededicated, this time by Mandela himself as around 5000 people packed into Millennium Square, some waiting over five hours to see Mandela be made an Honorary Freeman of the City.  He was introduced to the people by newsreader Jon Snow who said that Mr Mandela was the ‘greatest living example of forgiveness, hope and aspiration.’

There are three plaques in the garden, the first was used in the original 1983 dedication and reads ‘These gardens were named in honour of Nelson Mandela symbol of resistance to Apartheid in South Africa at a ceremony held on 10th December 1983, N. Mandela – The Struggle Is My Life – 26th June 1961’.

The second plaque was used in the re-dedication of the new gardens and reads ‘The Mandela Garden, this garden was rededicated by Dr Nelson Rolihlahla Mandela Honorary Freeman of the City of Leeds 30th April 2001’.

The third plaque reads ‘To mark the occasion of the first election open to all citizens to be held in South Africa April 27th 1994’.

In 2005 the gardens were made over again, this time to become home to the Leeds City Council 2004 Chelsea Flower Show entry entitled “Freedom for the Future”.  The entry celebrated ten years of democracy in South Africa and happened in partnership with the Leeds twin city of Durban, South Africa.  School children from both cities were involved in the design, represented by a ‘Freedom Path’ of resin block footprints from the children.  The handprints of the Durban mayor and leader of Leeds City Council are shown on a bronze plaque and flower beds are planted with plants native to Britain and South Africa while the water sculpture is said to be symbolic of the bars of Nelson Mandela’s prison cell.

Next: Head up Great George Street towards Upper Briggate, once past St John’s Centre you will find on your right the Merrion Gardens of Rest…

18th November 1936 Plan of Civic area, drawn up when a decision was being made to resite the war memorial (C) Leeds Libraries 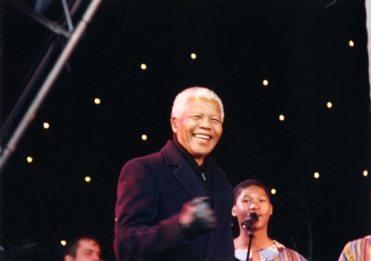 30th April 2001. Nelson Mandela smiles warmly as he addresses the many thousands of people who have assembled in Millennium Square for the historic occasion of his visit to Leeds (C) Leeds Libraries 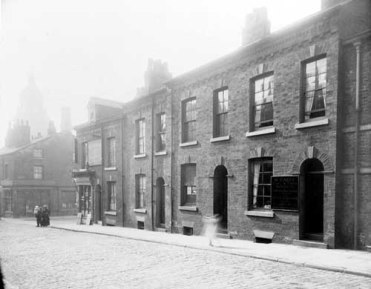