Prior to 1930 the area now known as Victoria Gardens was a busy, built up block consisting of shops, a pub, insurance offices as well as residential properties, including the home of folk song collector Frank Kidson. The 1930s widening of the Headrow saw the demolition of the entire site and in December 1936 it was decided to create a Garden of Remembrance in front of the Municipal Buildings and the Art Gallery. The architect was J E Proctor, and the scheme was to include the War Memorial, which originally stood in City Square. The site was paved and provided with flower beds and the Garden of Remembrance was opened on 28th October 1937 by the Lord Mayor of Leeds Mr. Tom Coombs; the opening ceremony was followed by a re-dedication of the War Memorial.

Over time more memorials have been added to the Gardens. The Leeds Pals and Leeds Rifles have a joint memorial as do those Victoria Cross holders born or buried in Leeds. More recent additions include the WWI memorial bench, the 75th anniversary of the D Day landings light installation and a WWI soldier silhouette. But Victoria Gardens are about more than war memorials. In 2017 an International Workers Memorial was unveiled and in 2015 the Yorkshire Society unveiled a plaque in honour of Jane Tomlinson. Victoria Gardens has clear sporting links, through acting as a starting and finishing point for events such as the Jane Tomlinson 10k and half marathon and the 2014 Tour de France – the starting line is now permanently marked on the Headrow. Additionally the Leeds boxer, Nicola Adams, has a golden postbox signalling her gold medal at the London 2012 Olympics as well as a ‘Paving the Way’ plaque from the MOBO awards.

Victoria Gardens has hidden artwork that is easy to miss if you don’t know where to look. An unmarked Oak tree and basalt pillar are the works of German artist Joseph Beuys. He believed in the healing power and social function of art and saw creativity as central to all aspects of human existence, declaring that ‘everyone is an artist’. One of his most well-known works was the 1982 planting of 7,000 oak trees over several years in Kassel, Germany, each with an accompanying basalt stone. After his 1983 exhibition in Leeds Art Gallery the city acquired one of the oak trees and basalt stones and this has been located in Victoria Gardens since 1998. There was an exhibition of his work in the Art Gallery on its reopening in October 2017.

Another piece of public art is the paving stone engraved with the words ‘You are a rock’. This was a collaborative art project by Pippa Hale, David Hawkins and Stuart Tarbuck for Situation Leeds in 2005, entitled Mene Mene. This saw text based artwork based on the New Testament spring up across the city although sadly much of it is long gone.

In 2011 the gardens were redeveloped by Groundwork Leeds with the planting of 26 new London Plane trees, chosen specifically for their adaptability to climate change. Turf was laid with low energy LED uplighters and the stone planters were cleaned and repointed. The giant chess set was refurbished and mini sets were carved into stone planters.

Victoria Gardens continues to be an active part of Leeds life with protests and celebrations, exhibitions and fairgrounds all making good use of this civic space in the heart of Leeds. 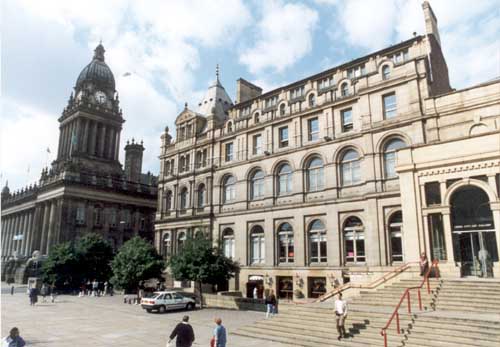 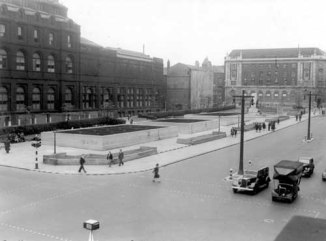 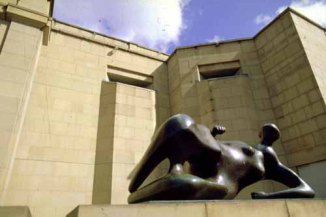