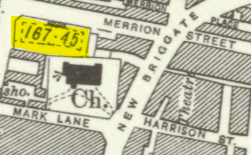 1932 Ordnance Survey Map of the Merrion Gardens of Rest

Opened in 1933 the Rest Gardens were a gift to the city from Thomas Wade’s Charity, his 1530 will stipulating that the money should be used to benefit the people of Leeds resulting in several public spaces being created.

St John’s Church, the oldest of the surviving city churches borders one side of the garden with the mock-Tudor style St John’s House (1930), Merrion Street and Wade Lane creating the other three boundaries.  Wade Lane was redeveloped into St John’s Shopping Centre in 1985.

Behind St John’s House once stood the 500-seater New Briggate Synagogue and garden (1879), the second largest Synagogue in Leeds before it was demolished in the 1930s when the movement of the Jewish population towards Chapeltown dictated a move there of the Synagogue.

The three-quarter acre site is maintained by trustees of Wade’s Charity, containing lawns, trees, walkways, benches and a sundial in the centre. The garden was renovated in 2006 winning a Landscape Award, it had become vandalised and was no longer a pleasant place to visit.  The new design however included a safer open aspect and four new entrances along with access for wheelchairs and pushchairs through the gardens and into St John’s churchyard via the re-laid York stone paths.

The gardens hold memorials to lives lost in the World Wars.

This lovely garden offers peace and tranquillity despite being adjacent to the busy city centre traffic loop.

Next: Leave the Gardens by the rear gates and head into the grounds of St John’s Church…

18th October 1933 View of Garden of Rest, which had opened in March 1933. This looks across the garden to Merrion Street (C) Leeds Libraries