In our final Hidden Nature, Hidden History post for Heritage Open Day 2020 we include some notable areas just outside our City Centre walking route.  We hope you’ve enjoyed the 2020 tour and learning more about the green sites we enjoy today and the history and stories behind them.

Queen Square
Queen Square was planned and developed by brother John and George Biscoff who lived in Claypit House from 1787 and owned the adjacent land which became the Square.  Planned as three terraces around a central garden with the fourth side left open to Clay it Lane.  No 1 was built first in 1806 in red brick with stone details, the three storey building included a basement and warehouse facilities.  In 1822 the residents purchased the square piece of land in the middle to have a permanent garden.

From 1910 – 1979 the square was home to the Leeds Odd Fellows Society, founded 1826, who administered the 33 lodges off the Leeds District of the Independent order of Odd Fellows Manchester Unity Friendly Society. A Blue Plaque on the site reads

They offered workers and their families mutual financial protection in times of illness, unemployment and bereavement

Few Georgian squares were built in Leeds but Queen Square and Park Square are unique in that they remain virtually intact.  Queen Square is owned by Leeds Becket University. 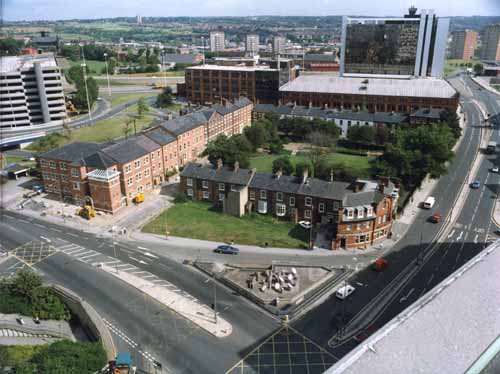 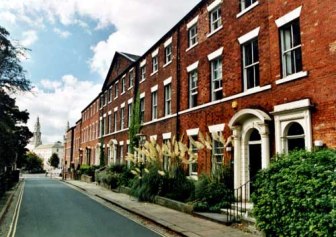 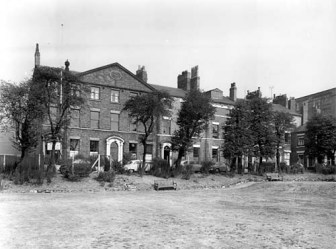 9th September 1959 Queen Square was initially developed by John and George Biscoff, the brothers had lived at nearby Claypit House since 1787 and owned the adjacent land (c) WYAS

St George’s Fields
Tucked away on the grounds of the University of Leeds is the last existing part of Leeds General Cemetery, now known as St George’s Fields. The cemetery opened in July 1835 and was designed by John Clark. Over 97,000 people were interred there including over 100 casualties from the First and Second World Wars. Notable internees include circus owner Pablo Fanque (William Darby) and his wife Susannah, John Atkinson Grimshaw, Ann Carr, Michael Sadler and Edward Baines. By the 1940s the cemetery was in decline and the land was purchased by the University of Leeds in 1956.  An Act of Parliament in 1965 gave the University permission to stop interments and create a public open space. Many headstones and memorials were removed with much controversy, although no exhumations took place. The space was reopened in 1969 with its original name of St George’s Fields. It is now a quiet, landscaped area with some headstones and memorials still in place as a reminder of its past. Open to the public and students alike, it can be accessed from Clarendon Road near the Henry Price student accommodation. Use the second entrance to view the original stone portico and pillars and follow the path to see the Clark’s Victorian chapel. 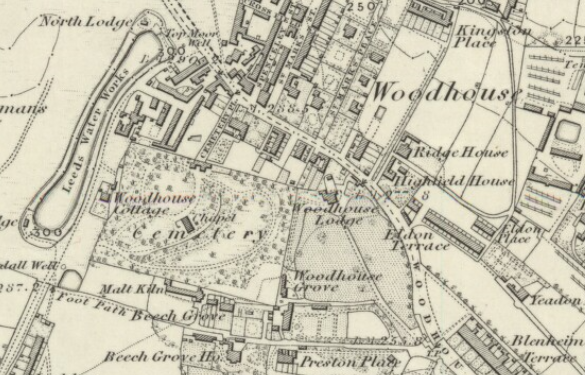 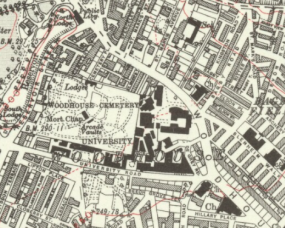 The still standing, Smithfield Hotel opened in 1861 receiving custom from the visiting sellers to the cattle market opposite, livestock were still regularly driven through the city centre and 500 head of cattle and 4,000 sheep and lambs were sold at the twice weekly market which also hosted a general fair twice a year and the Annual Great Show of the Smithfield Club.

Possibly tired of the animals being driven through the city centre streets in the late 1880s the cattle market cwas moved to a site on Gelderd Road and the Smithfield site reopened in 1888 as a park, it included trees, lawns a bandstand and a bowling green.

1903 View of park, opened in 1888 on the site of the former Smithfield meat market (c) Leeds Libraries 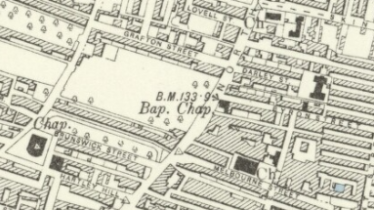 In what was once the Little Woodhouse area of Leeds stand two squares surrounded by Georgian terraces and Victorian villas around which have resided a number of campaigning women who found a way of making their voices heard in the male dominated city of Leeds.  These two squares are the predominant green spaces in a place described by Ralph Thoresby as “One of the pleasantest hamlets in the parish” (1715) though our story starts a couple of centuries before that.

In the middle ages the fields were used by farmers for cattle and clothiers would set up tenter frames for drying cloth.  In the 15th century the land was given to Thomas Cranmer the Archbishop of Canterbury and passed onto his son on his execution.  In 1583 it was bought by John Kendall and passed through his family before being bought by notable Leeds philanthropist John Harrison in 1618, whose descendants on inheriting the land began to divide it up and the birth of the Claremont Estate.

In 1786 John Wilkinson Denison bought part of the land to build the grand mansion Denison Hall, the hall was sold to merchant George Rawson in 1823 who laid out Hanover Square with mature trees and grassed areas, the scale and size of the hall set it apart from the Georgian homes and Victoria villas on either side of the slope.  In 1866 Isabella Ormston Ford lived briefly at the hall, Isabella along with her sisters was involved with women’s suffrage and concerned with the employment and education of working women,  a founder of the Leeds Independent Labour Party.

18th May 1966. View of Hanover Square from the junction with Hanover Mount, showing terraced housing in descending order from no.24 on the right (c) H. Ainscough

Woodhouse Square came later being laid out by Leeds Solicitor and owner of nearby Little Woodhouse Hall, John Atkinson, in 1840 as a formal square to the surrounding residences.

Woodhouse Square and its surrounding streets became home to some famous and important women of Leeds.

No.6 Woodhouse Square (highlighted green) was home to wealthy philanthropist Ellen Heaton, her blue plaque reads – ‘Lived in Woodhouse Square from 1859-94. She was an influential Pre-Raphaelite art patron and an active campaigner for women’s rights, education, health, environmental issues and anti-vivisection.  Her friend, the poet Christina Rossetti, stayed here’.

This building is now home to the Swarthmore Education Centre where from 1973-1994 was the meeting place of the Leeds branch of the Campaign for Homosexual Equality, whose activities involved lobbying MPs and supporting protest work. A mixed group, with male and female members they also held discos at Swarthmore.

No 2. Claremont Villas at the top of the square (highlighted yellow on the 1932 map) was home to suffragette Leonora Cohen from 1923-1936.  Her blue plaque reads – ‘Leading suffragette famous for smashing a showcase in the Jewel House at the Tower of London and for her hunger strike at Armley Goal in 1913.  1873-1978’. A note tied to around the iron bar used to smash the case carried the message ‘This is my protest against the Government’s treachery to the working women of Great Britain’.  In later life Leonora became the first woman president of the Yorkshire Federation of Trade Councils and the following year was appointed a magistrate, one of the first women appointed to the bench.  She was a JP for 25 years and by the mid-1920s had been awarded an OBE for services to public life.

The garden in the centre of the square displays a plaque dedicated in 1967 to Mary Pearce the first woman councillor to become Lord Mayor of Leeds, Mary was the first woman Parks and Committee Chair, a fervent environmentalist her mayoral speech of 1958 called for a smokeless Leeds, Mary lived in a flat at 7 Woodhouse Square.  This sunken garden are the remains of the WWII static water tank built in case incendiary devices were dropped on the city.

The Little Woodhouse area fell within the constituency of MP Alice Bacon from 1945-1970, the first woman MP for Leeds.

On the east side of Woodhouse Square stands the Sir Peter Fairbairn statue, Sir Peter was a Scottish engineer and inventor who moved to Leeds and simplified the flax-spinning machinery allowing for greater efficiency and economy.  Fairbairn became Mayor of Leeds from 1857-58 ns 1858-59, he hosted the visit of Queen Victoria to the opening of Leeds Town Hall and received a Knighthood from the monarch.

26th November 1941. View of water tank under construction, looking to the south of the square, Swarthmore Education Centre can be seen (c) Leeds Libraries 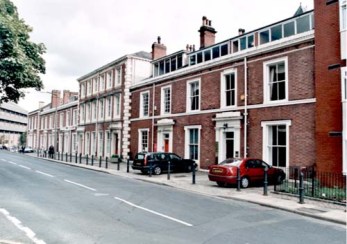 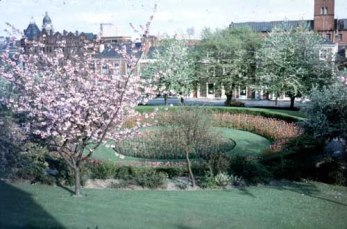 1978. This springtime view of Woodhouse Square was taken from a window of number 2 Claremont Avenue (c) Leeds Libraries