The last in our trilogy of articles to tie in with the final few days of this year’s Heritage Open Days festival: Collections Manager Rhian Isaac shares some of our herbals that have been teaching people about plants and nature for hundreds of years…

This year’s Heritage Open Days (September 11-20) has looked a little different, but the theme of ‘Uncovering Hidden Nature’ aims to encourage people to celebrate our natural heritage, which seems more important now than ever.

A recent YouGov poll commissioned by the National Trust revealed:

When exploring the natural world a guidebook comes in handy, especially if you are planning on foraging or identifying plants with useful properties. Historically this is what herbals would have been used for.

In our collections we have a number of different herbals dating back to the 16th century , some are so big they are difficult to carry whilst others are pocket sized, many have beautiful illustrations and they all provide us with valuable information about what plants were growing in Europe at the time and what people’s beliefs about them were.

What is a herbal?
A herbal is a book of plants, that describes their appearance and their properties. They were very important as they were originally used to identify a specific plant and its medicinal uses. Some herbals included illustrations of what a plant looks like in order to help the identification process.

Herbals date back 5000 years and the medical uses of plants have been found on papyrus and clay tablets, from Ancient Egypt, Samaria and China. The first printed herbals date from the beginning of European printing in the 1480s. Their production is closely linked to the history of printing. Herbals, because they were of considerable interest to the wealthy physicians and merchants, tended to be prime candidates for publication. They also provided valuable information for apothecaries, whose job it was to make the pills and potions prescribed by physicians. This means that compared to other types of books, herbals were popular items to be printed.

There is so much about the physical books that are interesting (who owned them and left marks in the pages?) and the wider context in which they were written (who was able to access the important medicinal information in these books? What was the impact of them being written in English?) but I will just give a very quick introduction to three of the herbals you can find in our collections. Hopefully it will be enough to encourage you to ‘uncover’ them for yourself.

The earliest herbal we have in our collection is by Rembert Dodoens who was born in Flanders in 1517. He became personal physician to the Holy Roman Emperor, Maximillian II, spending time in Vienna and Prague. He later resigned (he didn’t like Prague) and went to live in Cologne and this is where he published several botanical and medical writings.

His herbal borrowed heavily from earlier material but Dodoens is credited with moving botany away from the tradition of listing plants alphabetically and towards more systematic classification. He organised the plants into six groups according to their properties and attributes.

His work is best known to English readers through Henry Lyte’s translation known as A New Herball and we have a 1586 edition in our collections. It became one of the most popular botanical works of the 16th century and in Dodoens’ time it was the most translated book after the Bible. Its popularity was probably due to the use of vernacular rather than Latin, which meant the audience for the work was much wider. This is something we see again with later herbals.

In the back of this copy a page has come loose but the fragment has been saved in the back in a wallet. The name of a previous owner John is given and dated 1669 so not long after the printing of the book and is a tantalising clue to the history of the book. 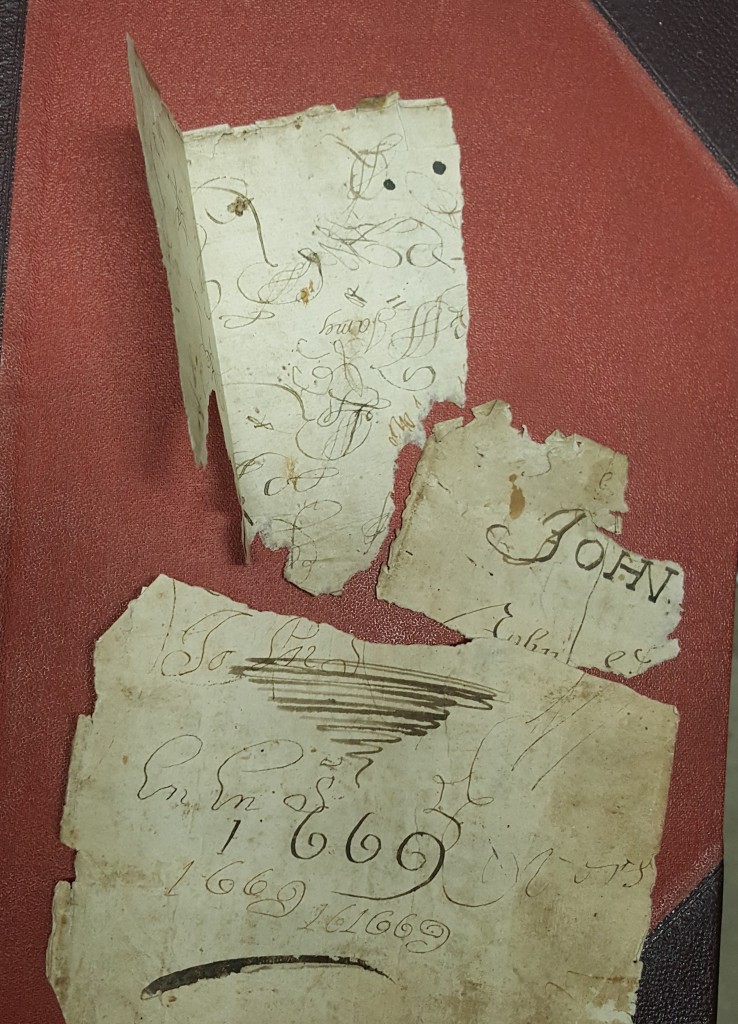 John Gerard, The Herball, or Generall Historie of Plantes (1597 and 1636)
Gerard’s lavishly illustrated Herball that was printed in 1597 made him the most famous of all the herbalists. His garden in London contained over a thousand herbs and was full of rare specimens from white thyme to the double flowered peach.

His herbal was not unique, being largely another translation of Dodoens, and the publication was plagued with accusations of plagiarism. Although criticised for his borrowing from other works, it is Gerard’s command of the English language that made it so popular. It can be argued that he was just doing what all other herbalists had done in the past by building upon the work of their predecessors.

He received donations of rare plants and seeds from many people and there are lots of attempts to try and link Gerard to famous people of the day. Eleanour Rohde suggests that ‘in view of Sir Walter Raleigh’s well known enthusiasm for collecting rare plants, it is at least possible that he may even have been a donor to Gerard’s garden’.[2] It would also be nice to think that Shakespeare must have seen Gerard’s garden as we know he lived for some time in the same area. In those days two such prominent men surely must have known each other. Shakespeare’s writings are full of old herb lore and outside of the herbals there is more English herbal legends contained in his plays than any other writer.

the smell of Basil is good for the heart…it taketh away sorrowfulness, which cometh of melancholy and maketh a man merry and glad.

He also claims that Rosemary was so powerful that even wearing it was medicinal,

But he does pour scorn on some other popular superstitions, such as the mandrake saying,

There have been many ridiculous tales brought up of this plant, whether of old wives, runnegate surgeons, or physic mongers I know not, all whiche dreames and old wives tales you shall henceforth cast out of your books of memorie.

There are surprisingly few vegetables mentioned in the herbal but Gerard was one of the first to grow potatoes. He proudly says ‘I have received hereof from Virginia roots which grow and prosper in my garden as in their own native country’. However, he wrongly claims it originated in Virginia, when in fact it came from South America. 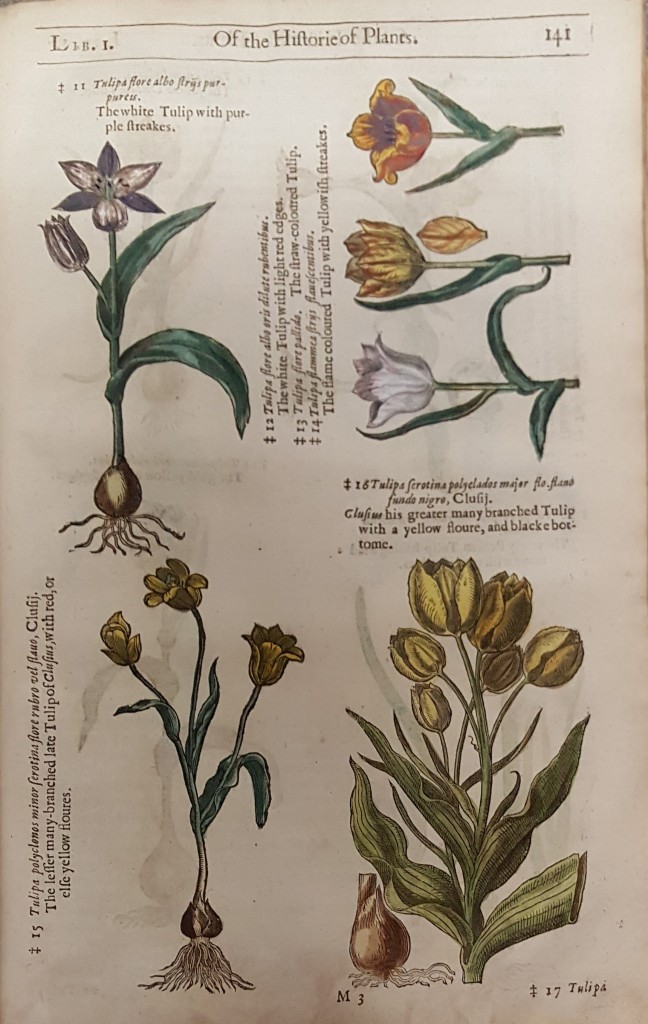 Our first edition of Gerard’s Herbal is fully coloured and this would have been carried out by hand after the woodcut illustrations had been printed. Many images at this time were meant to be coloured in and were seen as incomplete if left in black and white.

A later edition 1636 is only partially coloured in which suggests that it was the reader that coloured it in themselves, perhaps as a way to record plants he or she had seen in person. There are lots of marks in the margin and I even found a pressed plant in the pages of this copy which I think supports the idea that it was a working copy. It is really amazing to see these additions from past readers. 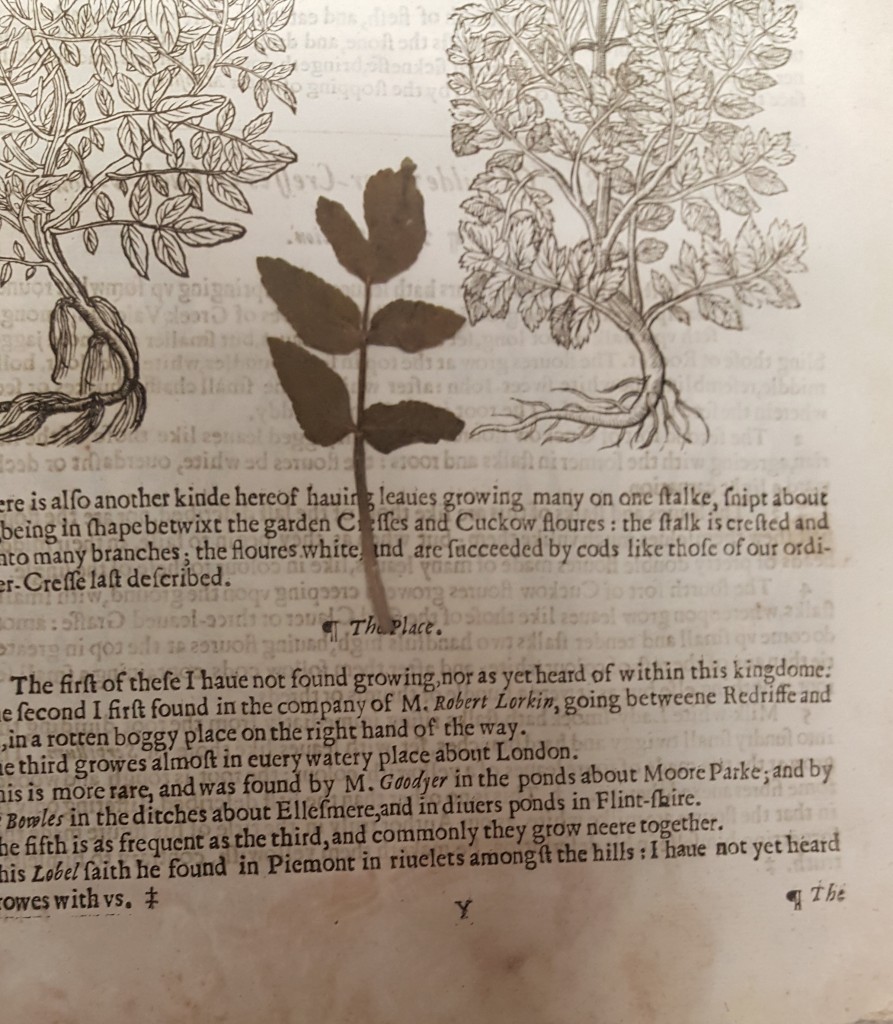 For people interested in Tudor life, this book is a real treasure that displays an unrivalled account of the flowers and plants in London during the Elizabethan period.

John Parkinson, Theatrum Botanicum (1640)
This enormous book was created by John Parkinson and is the largest herbal in the English language. It describes 3800 plants and includes more than 2700 woodcut illustrations.

The title page features Adam and Solomon (representing Toil and Wisdom). The four female figures in the corners are Europe, Asia, Africa and America surrounded by specimens found in their continents. 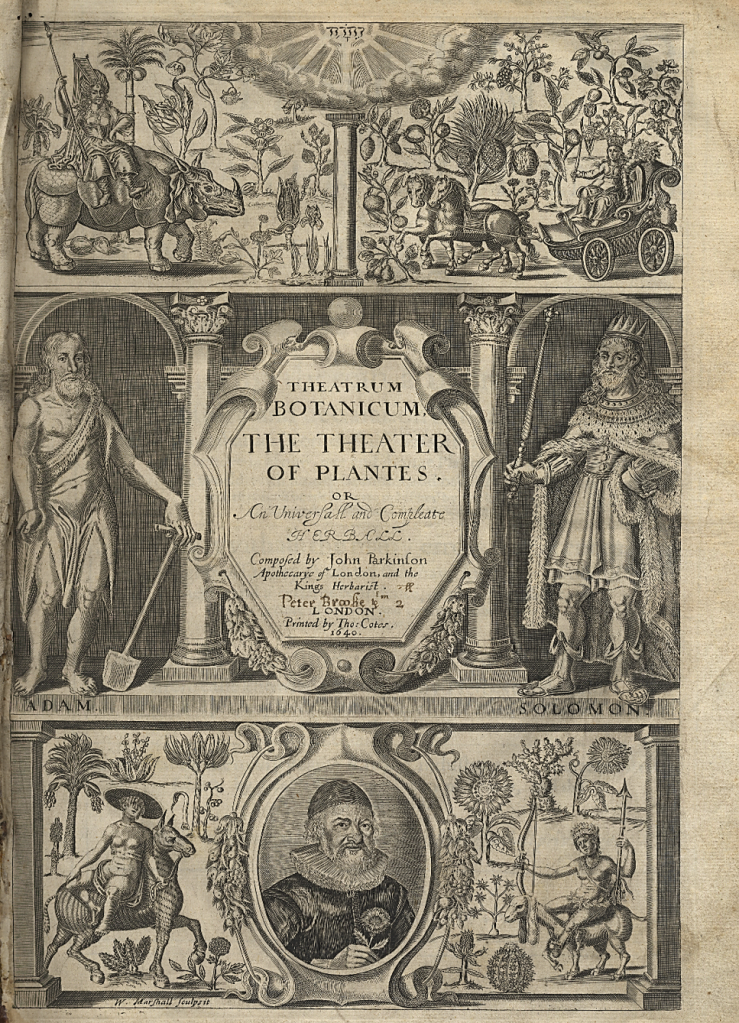 Although a later book than Gerard’s, there are still many superstitions included in Theatrum Botanicum, such as, the use of herbs as amulets, the existence of unicorns and the legend of the vegetable lamb, a plant that is said to carry a small wool bearing lamb at the head of its stalk.

Parkinson also gives more beauty recipes than any other herbalist. For people who want darker hair he recommends a concoction of bramble leaves and to lose weight he suggests using

the powder of the seedes of elder first prepared in vinegar and then taken in wine halfe a dramme at a time for certain dayes together is a meane to abate and consume the fat flesh of a corpulent body and to keepe it lean.

Parkinson would be the last person to produce a traditional herbal and already at this time the areas that would normally make up a herbal – agriculture, botany and medicine – were becoming separate disciplines.

Although his work never achieved the popularity of Gerard’s, Parkinson was able to make improvements on previous herbals. He introduced seven new plants into England and was the first person to mention thirty three native plants, which included, the Welsh Poppy, the Strawberry Tree and Lady’s Slipper.

Find out more…
There are many more herbals in our collections at Central Library, as well as other beautiful botanical books which can be found in the Gott Bequest.  Have a browse of our research guide and please get in touch if you have any questions about any items in our collections. These books really are an important part of our natural heritage and we want to share them with as many people as possible!