Kiera Falgate, Library Officer on the Central Library’s Arts Floor, tells us about the art of Andy Goldsworthy, ahead of a screening at Hyde Park Picture House of a revelatory documentary on his life and work… 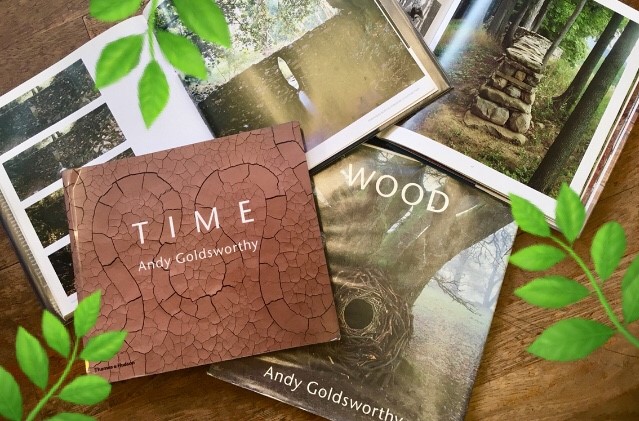 Andy Goldsworthy, who grew up near Harrogate, is one of the most influential and fascinating living British artists, and his work can be found from New York to Wakefield, in pristine galleries and in sheep fields. Hyde Park Picture House are showing Leaning into the Wind – Andy Goldsworthy on Sunday 26th and Monday 27th of August. In the film, Goldsworthy discusses developing his art from traditional craftsmanship to large scale machine assistance for increasingly bigger projects.

The Art Library holds many books about Goldsworthy, such as Time (2008), which includes some of his most beautiful work working only with natural materials such as rain, snow, leaves, mud, stone and wood, arranged into poignant sculptural interventions, then left to rot, wash away, blow away, or be grown over. The fundamental ephemerality of Goldsworthy’s gently question ideas of preservation and permanence in art, especially at a time when we are thinking about our environmental impact more than ever.

If you’re interested in Andy Goldsworthy, we also recommend checking our catalogue for Richard Long, Christo & Jeanne-Claude and the land art movement.