This week, Librarian Antony Ramm gives the third part in a brief history of Antiquarians in Leeds, as told using books, manuscripts and other treasures held at the Central Library. You can find further instalments elsewhere on this blog, as well as a research guide detailing the relevant library collections available.

In the previous part of this brief history, we encountered Thomas Dunham Whitaker’s 2nd edition of Thoresby’s Ducatus, as well as his own Loidis and Elmete – a sort-of sequel to the former work. We also discussed the practice of ‘grangerising’ a book – the insertion or addition of prints and other material alongside the pages of an original text. Now, in this third and final part, we begin with a book that combines Whitaker’s works with that grangerisation: William Boyne’s History of Leeds.

William Boyne (1814/15 – 1893)
Boyne’s life-story has been told elsewhere on this blog, but briefly: born around 1814/15, in Leeds, Boyne’s father was a tobacco importer and manufacturer, whose success allowed him to build a family home that he named Virginia Cottage (now Lyddon Hall, in the University of Leeds grounds). On his father’s death in 1849, William inherited a substantial sum of money, which he used to build a house even more impressive than Virginia Cottage: ‘The Woodlands’, on a slice of Headingley land purchased from the Earl of Cardigan.

Boyne also used his inheritance to build a spectacular collection of antiquarian material, much of it related to Leeds and including original artworks by local artists, as well as rare manuscript copies of letters, maps and other ephemera. Boyne used this material to expand the original two volumes of Whitaker’s Ducatus and Loidis to seven-volumes of a work that became known as his History of Leeds: it is a genuine treasure of the Central Library, being the only copy in existence. It has been described as “a masterpiece of antiquarian workmanship…[t]he most fitting monument the city can boast of.” 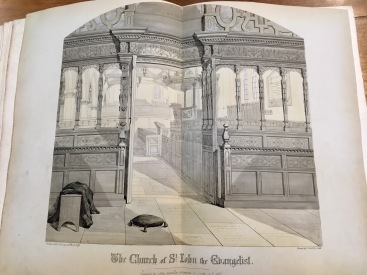 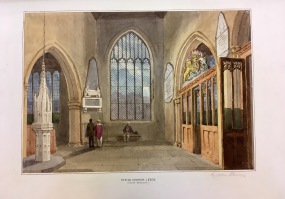 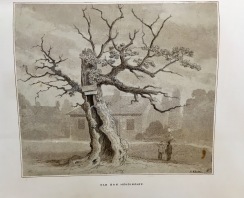 James Wardell (1814 – 1873)
Like many of his predecessors, Boyne was part of a wider circle of antiquarians, and collaborated on several projects, including the short-lived journal Reliquiæ Antiquæ Eboracenses. Boyne was also friendly with another fellow Leeds antiquarian of the same period – James Wardell.

Wardell was an important figure in 19th-century Leeds, even outside of his historical work, being the Deputy Town Clerk. For our purposes, however, it is his 1846 book The Municipal History of the Borough of Leeds which is of interest. The Municipal History was the first (and, so far, only) political history of Leeds. 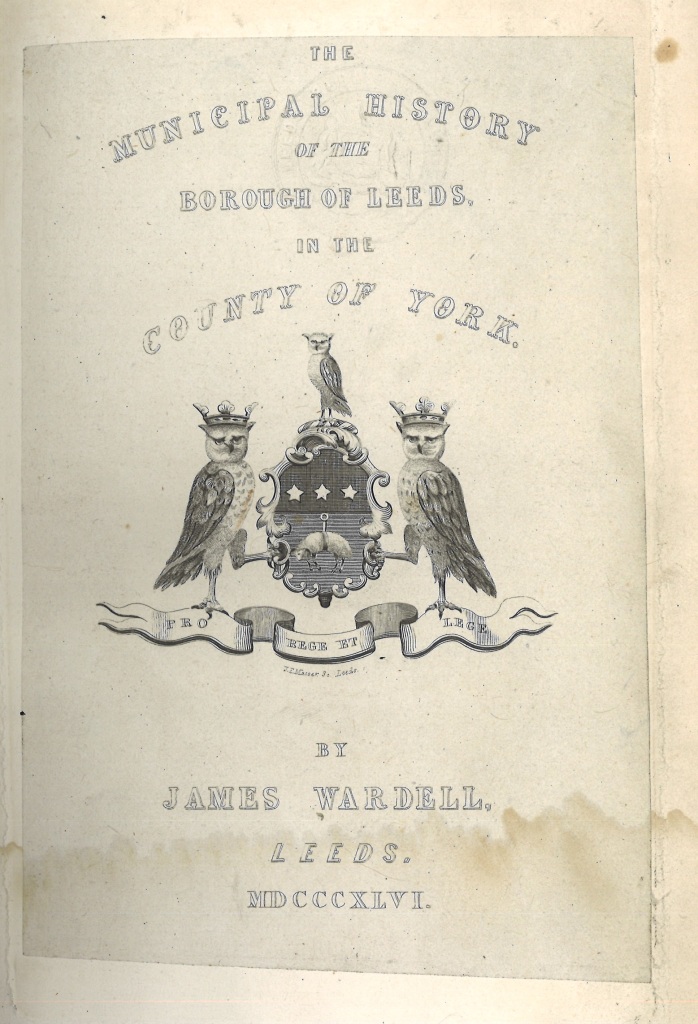 The Central Library holds several copies, but one in particular is particularly important and interesting: an edition gifted by Wardell to Boyne himself, and featuring a handwritten note together with a photograph of the author.

James Wardell – but what was his job? 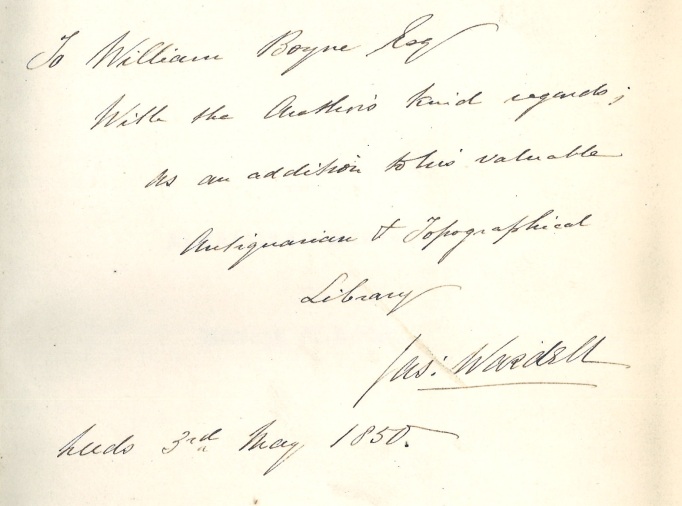 But that is not the only unique Wardell item held at the Central Library – we are also honoured to possess two-volumes of  letters to Wardell from a wide variety of acquaintances and friends across the world, including the Principal Librarian at the British Museum, the Leeds MP George Skirrow Beecroft, the barrister William St. James Wheelhouse (later an MP for Leeds), William Bowman (of the aforementioned Reliquiæ Antiquæ Eboracenses) and several examples of correspondence with an archivist at the Public Record Office, during Wardell’s research for the Municipal History. 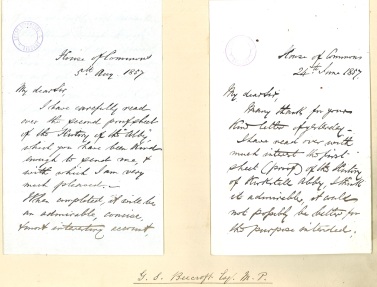 In many ways, it can be argued that Wardell and Boyne were the last true Leeds antiquarians, in the classic sense of a lone individual privately collecting material for his (or her – but usually ‘his’) own benefit. By the late 19th-century, that meaning was being slowly replaced by the growth of the professional historian in the Universities, and the emergence of local historical society – such as Leeds’ own Thoresby Society (established 1889). There was to be one exception, however, in the form of a figure straddling both eras: Alf Mattison.

Alf Mattison (1868 – 1944)
Outside of the modern digital age (where knowledge and information is so widely available and accessible), it is arguable that nobody has ever known more about Leeds’ history than Alf Mattison – and it is certain that nobody has ever written about the city’s past in more detail, across a multitude of journals, books, newspaper articles and notebooks.

He worked for the Leeds Tramways and was affectionately known to his colleagues and peers as ‘Old Leeds’. As well as being a local historian, Mattison was a keen photographer; several of his works can be seen on our Leodis collection of historic images – Mattison would often use his photos to illustrate his popular evening and daytime talks. He was also the Secretary of the Thoresby Society, and a committed and active socialist. On his death in 1944, Mattison’s collection was split in two: the political material found its home at the Brotherton Library of the University of Leeds, while the antiquarian material was donated by his wife to the Central Library, where it remains today. We also hold many copies of his 1908 book The Romance of Old Leeds – highly-recommended as the most accessible introductions to Leeds’ history still in print. 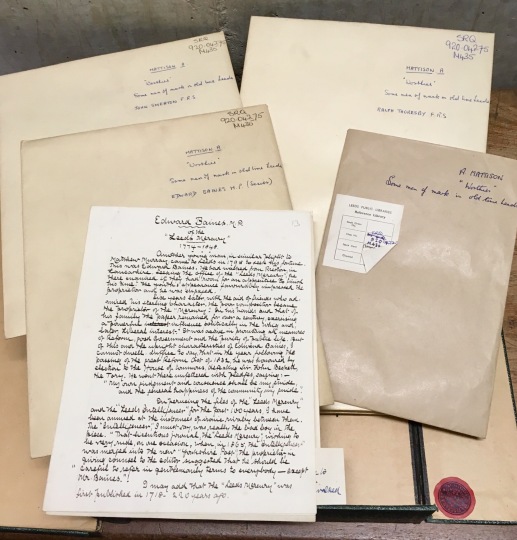 Examples of material in the Alf Mattison collection of antiquarian work 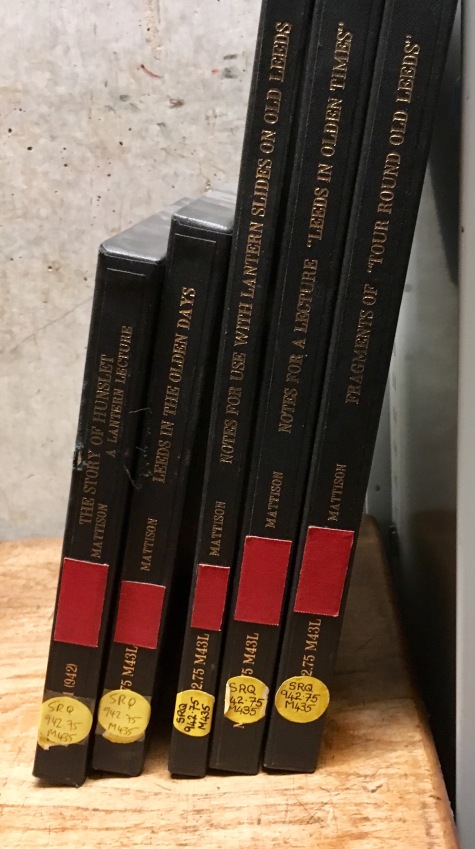 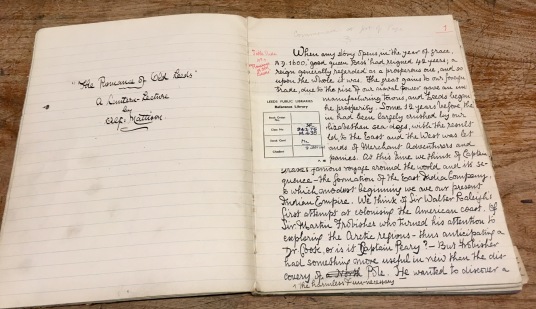 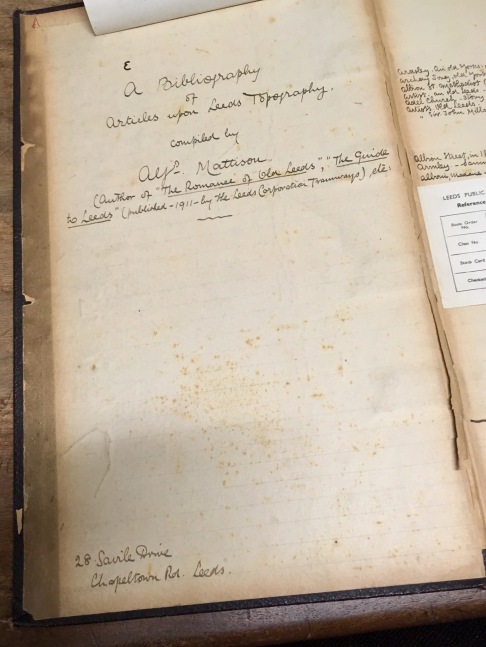 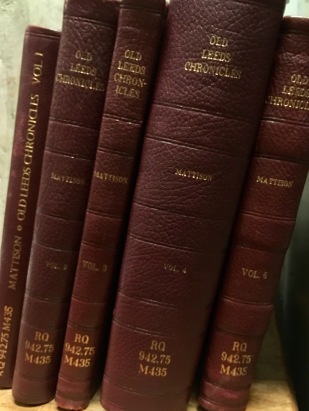 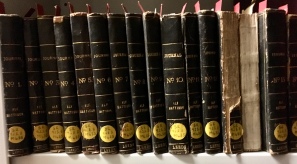 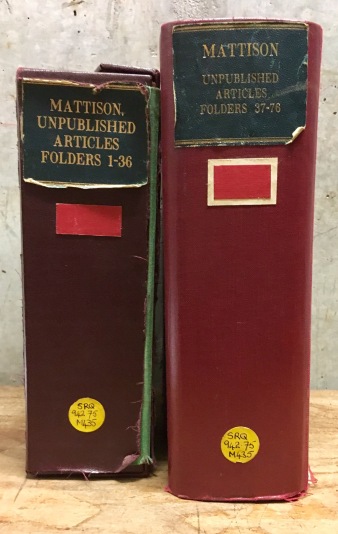 You can read more about our Mattison Collection elsewhere on this blog, as well as reading more about what is contained in the material.

Please contact the Local and Family History or Information and Research departments to arrange an appointment to see any of the books or manuscripts mentioned here.