On Wednesday the 11th March we have a talk on ‘Working-Class Women’s Autobiographies and the History of Everyday Life.’ This talk will be given by Dr Claire Martin, a Lecturer at The University of Leeds. This article will highlight interesting items from the Leeds Libraries Collection that detail the everyday life of working-class women and also show the limitations of our own collection. If you would like to book tickets for the talk you can book on Ticketsource.

The main problem when researching working-class women in the early twentieth century is that there isn’t a lot written from their own perspective, and so in order to explore this topic you have use different resources. A good example of these limitations comes from the autobiography Calverley in the 1920’s by Alan Grimshaw. Though written from a male’s, Alan Grimshaw’s, perspective this item can still be useful when researching women’s lives during this period. Grimshaw discusses his early life in Calverley during the 1920’s and talks about the various influences that he had when growing up. We will see how Grimshaw depicts his mother, Maggie and try to examine the information that this gives us about women’s lives during the 1920’s.

Alan Grimshaw first speaks about his life as a very young child with his parents, Percy and Maggie Grimshaw, and heir first house at 20 Salisbury Street, Calverley. Percy and Maggie were married in 1906 at St Wilfrid’s Parish Church.

Maggie stayed at home while Percy worked in the textiles mill. Their house was a newly built in the early 1900’s and had a very small garden that was used to grow vegetables. Interestingly Alan states that his birth came after 10 years of married life, and he was told that his parent had given up hope of having children. This information about Alan’s early life does tell us how his mother lived. We know that they had their own house with three rooms. More importantly we know that Percy’s job must have been fairly well paid as Maggie was able to stay at home, though we do not know if Maggie had a job before Alan was born. A more personal touch about Maggie’s life is that they struggled to have children, Alan does not say whether he was the first born or the only surviving child.

Alan then mentions that as a baby he did not have any feeling in his right arm. In an attempt to solve this problem his mother travelled from Calverley to Park Square, Leeds every week so that Alan could receive physiotherapy. Alan states how his mother walked from Calverley to Rodley and caught the tram into Leeds and walked to the doctors on Park Square. Alan’s admiration for his mother is evident as he discusses the amount of time and effort this must have been for her. The language that Alan used to describe his mother here is very telling, he calls her strong, determined and resourceful. From how Alan recounts his early life we can start to piece together parts of his mother, Maggie’s life as well. Unfortunately, as Alan starts to grow up his autobiography becomes more about his life at school and with his friends and less about his mother. Though this is understandable, it is a reminder that this was written by Alan and shows the limitations of using a male’s perspective in order to understand the lives of women.

Alan’s memories are just one example among many that can be found in the superb collection of local autobiographical memories found in the Local and Family History department at Leeds Central Library. Many of these are unpublished or small print-run publications, and most contain the memories of working-class men and women through the 20th-century; all are invaluable as a largely untapped record of how so-called ‘ordinary people’ lived and felt during the last 100-years.

Several of the most interesting are written by or about women – as Alan writes so movingly about his mother. Particularly good examples would include Molly A.Kean’s My Life in the Fashion Trade (no date, but covering the period between the 1940s and the 1990s); Jean Barker’s Pages From My Scrapbook of Meanwood (2002); Hazel Poulter’s memories of her childhood in Kirkstall; When Our Ship Comes In: Black Women Talk (1992) by the Chapeltown Black Women Writer’s Group; and Where’s the Water Gone? A Chapeltown Soap Opera: The Story of the Chapeltown Laundry Co-Operative (1999):“We want to tell you our story of how…[a] group of Black women…[c]ame together in a workers’ cooperative to provide laundry services to our community”]. All of these, together with many more, can be seen in our new catalogue of this autobiography collection, which you can access by clicking on the image below. 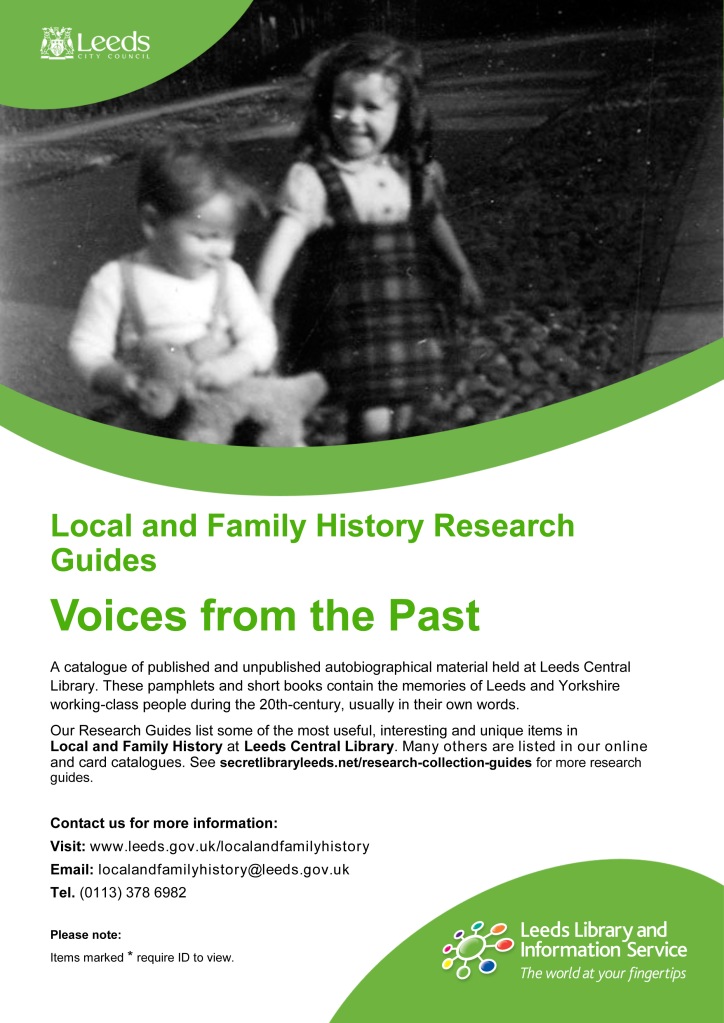