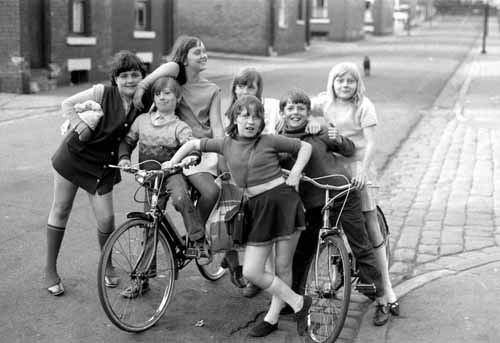 This group of girls and boys with their bicycles are posing with attitude on Wolseley Road, Burley, in 1969. They had just returned from Kirkstall swimming baths on Kirkstall Road, which was close by. And that’s when visiting photographer Eric Jaquier captured the moment in a striking black-and-white image, full of the warmth and personality typical of his style.

Now, almost fifty years later, Eric is compiling his pictures into a forthcoming book to be titled Strangely Familiar: Photographs in the Streets of Leeds 1969-2015. Not only that, but he hopes to revisit the sites of many of his original works to document anew the changing character of the areas. He even hopes to reconnect with some of the people from his photos, in order to create new portraits that both recall and revise the images of decades ago.

That’s where Eric hopes you might be able to help. Let’s hand over to him now to let him explain in his own words:

“My name is Eric Jaquier. I’m a retired Swiss journalist and photographer. A long time ago, in 1969, I took hundreds of pictures in the streets of Leeds during my one-year stay in the city. Almost forty years later, in Spring 2008, I had a big show, together with Leeds photographer Peter Mitchell, at PSL (Project Space Leeds). And now I’m working on Strangely Familiar, a book project containing these photos. That’s why I need your help.

“The main section of the book will offer the Strangely Familiar photos from 1969. And, for this section, your help would be appreciated because a lot of these pictures appear on the Leodis website. You can find them using the keyword ‘jaquier’, or click here for a direct link to all of them.

“Leodis visitors have already left quite a few comments under the photos. But I need more. I’m looking for people who recognize themselves, or relatives, or friends. And even if you don’t recognize anyone, recollections and anecdotes about this time in the life of the city are welcome.”

More then just a coffee-table object, then, Eric’s book will be a venture with a deeper ambition. As well as its unique juxtaposition of Leeds’ past and present, he hopes it will contain texts written by specialists in various fields, such as history, sociology and architecture.

So please take a look though Eric’s photographs on Leodis. If you’ve lived in Leeds for a while, scour the faces for people you recognize and think about the places you remember. Leave comments on as many images as you can, or drop us an email at localandfamilyhistory@leeds.gov.uk and we’ll be sure to pass it on.

Even if you’re not acquainted with many of the sights and scenes he captured in that now-distant decade, we’re sure you’ll find yourself lost in a city-scape that seems strangely, enchantingly familiar.