During pleasant afternoons in Leeds Central Library I have been discovering a story of upward social mobility in Victorian Leeds. It’s also the story of my front room.

I recently moved into a new place in Headingley. It’s in a large Victorian house carved up into flats which are let annually to students. Our front door leads off from the central hallway and opens onto a plain corridor with white painted walls, cheap carpets and fire doors behind which a kitchen and bathroom have been awkwardly squeezed in – all perfectly ordinary for a student flat, except for one thing. At one end of the corridor is the entrance to a spacious, splendid and overwhelmingly ornate Victorian living room.

It takes a bit of a push to get the door open. It is, after all, nearly ten centimetres thick, sitting on huge brass hinges. On its interior side, the door is covered in wooden carvings. When you push it closed it completes a series of decorative panels which extend all the way around three sides of the room, with the fourth side being made up mostly of windows. The wall on the left is dominated by an ornamental fireplace and there are hundreds of individually carved figures and motifs on the walls: Greek gods, Roman soldiers, medieval and Renaissance types, green men, mythological beasts and cornucopia overflowing with fruits and hops. 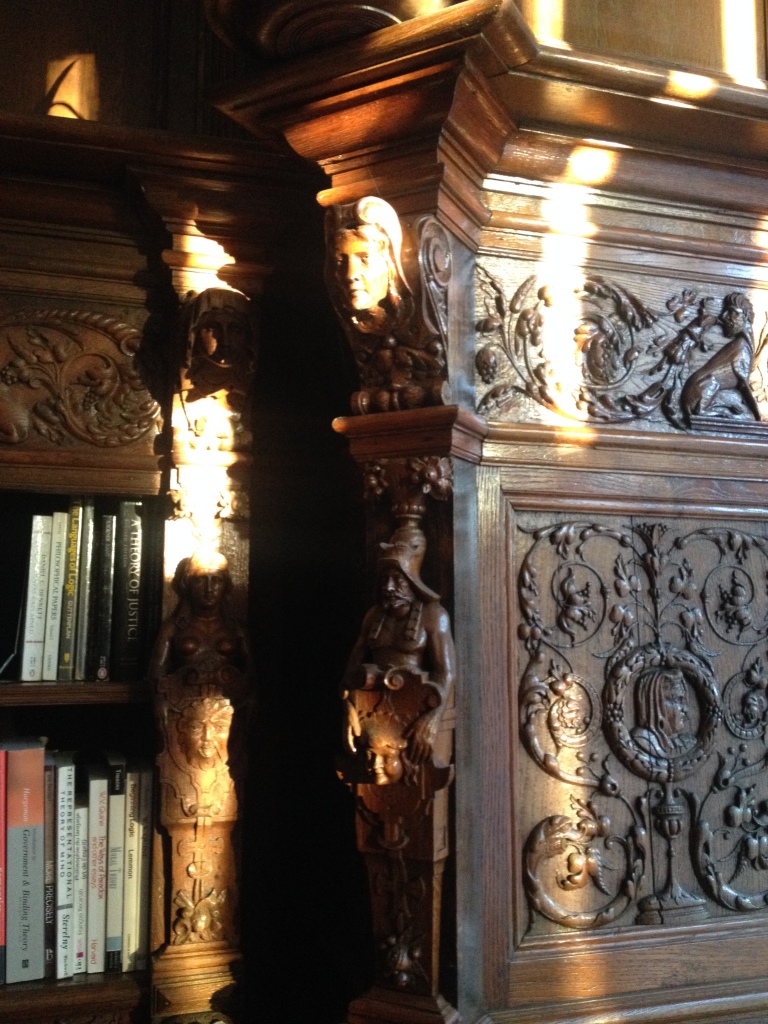 Who lived here? When was this eccentric decoration installed? Where did it come from? After a few afternoons in Leeds Central Library I am able to give fairly confident answers to the first two of these questions. The third remains open for the time being. A final question may be the most pressing of all: who is looking after this Victorian treasure?

The first clue was to be found over the fireplace, in the form of the initials, ‘JCH’. I soon found out that JCH was not one person but two, a husband and wife named Joseph and Charlotte Hudson.

Charlotte Bowron was born in 1836 in Wortley, Leeds. Her baptism record lists her father’s occupation as ‘servant’, and at age fourteen Charlotte was in service along with her parents and a brother to the Nunneley family in Park Place. Joseph Hudson was born in Rawdon in 1834. His father was a woolsorter. In 1841 and 1851 the Hudson family were living in Chapeltown.

The pair got married in 1857 according to Methodist tradition in the Oxford Place Chapel. Their marriage certificate records that he was living at the time in St Mark’s St., Woodhouse, and she in Alma Cottages (opposite what is now Sainsbury’s in Headingley high street).

By 1861 Joseph and Charlotte had moved to one of the cottages in Prince’s Grove off Shaw Lane, Headingley, behind what is now the Bowery Café, and had two young daughters. These cottages are modest, but the fact that they were here shows that Charlotte and Joseph were already on an upward trajectory: the occupants of the other houses in their terrace are listed in the census as ‘independent’, ‘landed proprietor’, ‘lead dealer’ and ‘civil engineer’.

Throughout his life Joseph is variously listed as a ‘traveller’, ‘drysalter traveller’ or ‘drysalter and oil merchant’. Perhaps his early days were spent traveling the streets, a kind of pedlar, selling salt, glue, olive oil and other goods. He must have been hardworking, ambitious and with a good head for figures because by 1866 he had become a partner in E.G. Jepson and Co., a well-established firm of drysalters and oil merchants. A year later the company purchased William Baxter & Co. of London and Leeds, and other buy-ups would follow in later years. Was this business strategy a reflection of Joseph’s personal ambition?

In any case, Joseph’s situation served the family well. By 1871 Joseph, Charlotte and their growing family were living in a large house on Cardigan Road, one of the new villas constructed after the demise of the Botanical and Zoological Gardens. No more terraced houses for this family: their new abode had fourteen rooms. The house became known as ‘Rawdon Lodge’, after Joseph’s birthplace.

In 1901 Rawdon Lodge is entirely missing from the census. This is because Joseph and Charlotte were on holiday in Cornwall with their daughter Mary Selina. I know this because the enumerator found them that year in the Falmouth Hotel. Joseph died later that year at Rawdon Lodge from ‘pernicious anaemia and cardiac failure’.

In 1911 Charlotte was still there, living in splendour with some of her grown up but unmarried children. She may well have remained there until her death in 1919. At that time she had one servant (in 1891 they had two) and enjoyed ‘private means’: she had come a long way in sixty years since she and her family were themselves in service. The family are buried in Lawnswood Cemetery.

What of the eccentric wooden panelling in my front room? It was installed at some point between 1889 and 1906. I can say this because installing it required extending the room by a metre or so at the front. The extension is not visible in ordnance survey maps from 1889 but it is clearly present on those from 1906.

Was it made specifically for Rawdon Lodge? I think not: some of the panelled units don’t quite fit the space, and have had to be modified, and there are carved panels around the side of the fireplace which are hidden from view by other units. All of this suggests that the panelling may have come from some other house which was being demolished. The panel which features Joseph’s and Charlotte’s initials may have been added later. 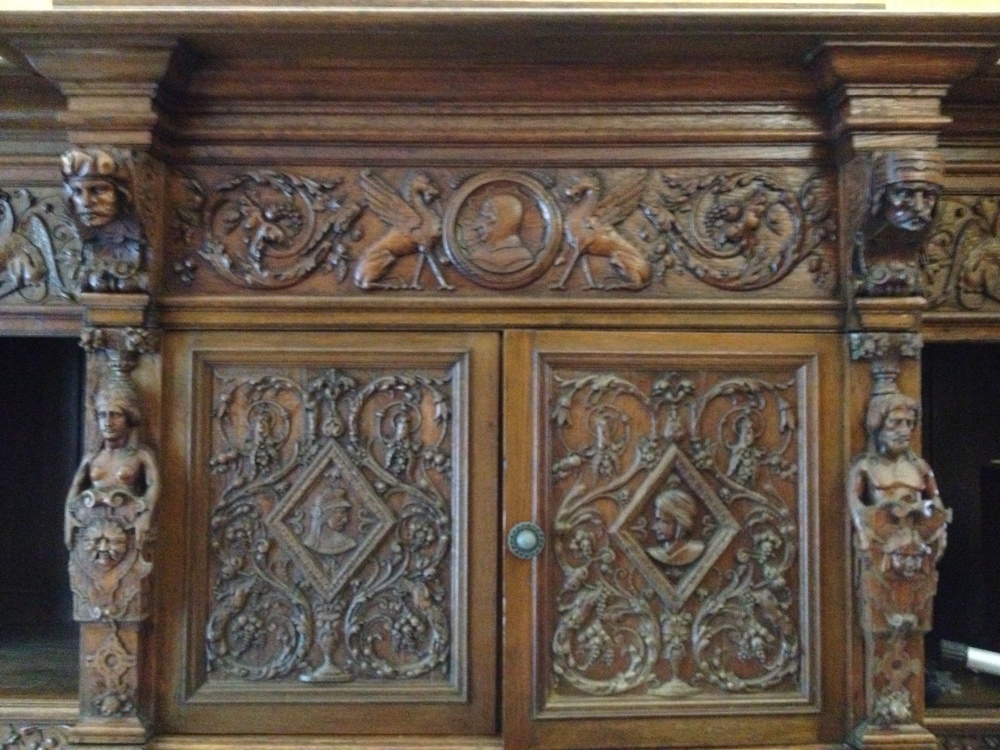 For now the carved panels remain something of a mystery. I’m hoping that this blog may pique the interest of someone who has the expertise to tell us more about their provenance. 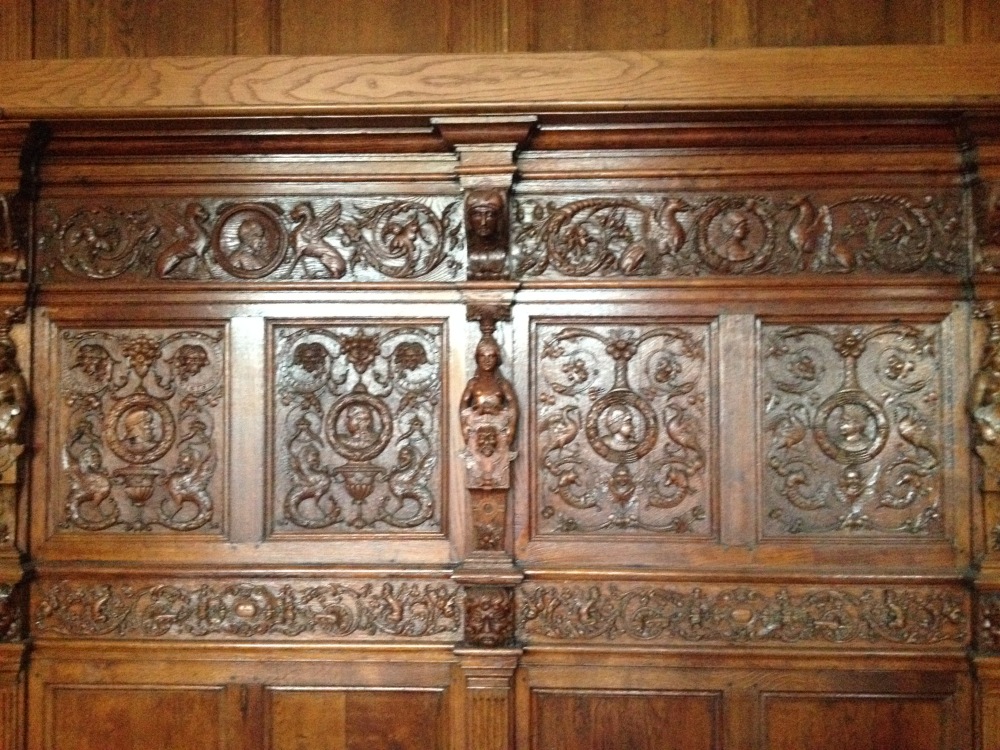 I’d also be extremely interested in seeing photos of the house or any maps of the area made between 1889 and 1906 as this would enable the possible time period during which the panelling was installed to be narrowed down further.

Finally, I worry about the future of this place. I heard vague rumours when I moved in about it being listed, but friends of mine who tried to find a record of this listing have failed. In less than a year I will have moved on, and other students will take my place. Who is ensuring that this antique living room is being cared for and preserved?