It’s a month until Shakespeare Week and to start getting people in the mood I have been bringing out some of our collections to explore why Shakespeare may have incorporated the supernatural into his plays.

Monsters, fairies, witches, demons and ghosts fill the pages of early modern texts. Theatre, in particular, was fascinated by the supernatural, 51 ghosts appeared in 26 plays up to 1610 and Shakespeare himself famously incorporated the supernatural into plays such as Hamlet, Macbeth, Julius Ceaser, Richard III and The Tempest.

Did you know the word monster comes from the Latin words ‘monstrare’ to demonstrate and ‘monere’ which means ‘to warn’?

As Jeffrey Jerome Cohen says in Monster Theory: (Seven Theses) ‘the monster exists only to be read’ and is always and only a projection of something else. Throughout history monsters appear at times of crisis and early modern England was no different. Between the mid sixteenth century and mid seventeenth century England experienced moral and religious difficulties, economic problems and cultural and political crises.

In this post I’ll just be concentrating on witchcraft and two of the books that may have influenced Shakespeare (you will have to come along to one of our events to hear more about ghosts and fairies!).

Witchcraft is referenced in all of Shakespeare’s plays. Witch accusations and hunting increased in the years after the Reformation as concern increased about religious conformity. Witches were seen as the devil’s agents and the accused were often marginalised, elderly women. Appearance was frequently linked to behaviour as John Gaule writes in 1646,

‘every old woman with a wrinkled face, a furr’d brow, a hairy lip, a gobber tooth, a squint eye, a squeaking voyce, or a scolding tongue…a spindle in her hand, and a dog or cat at her side; is not only suspected, but pronounced for a witch’.[2]

Witchcraft was also regarded as being closely linked to treason and rebellion and both Elizabeth I and James I were faced with plots against their regimes that were said to be carried out by Catholics with the aid of sorcery. On both occasions this led to a crackdown on witchcraft and religious conformity.

Shakespeare’s central use of witches in Macbeth reflects this very real fear of witchcraft during James I’s reign. It is widely believed that Macbeth was written in 1606, a year after the failed Gunpowder Plot.  The witches in Macbeth encourage Macbeth to plot and murder Duncan and this is something that would resonate strongly with early modern audiences. Highlighting a particular preoccupation with rebellion and witchcraft in the aftermath of the Gunpowder Plot. 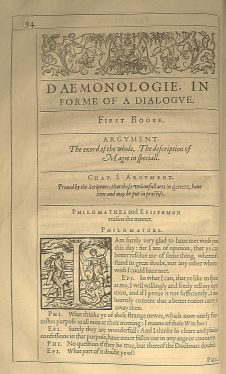 In 1597, King James VI of Scotland (later to become James I of England) published a treatise on witchcraft called Daemonologie. We have a collection of James’ works which was published in 1616 and includes this famous writing on the supernatural.

But why was James so obsessed with witchcraft? Some people have suggested that the violent death of his mother might have had an influence but perhaps the most significant event was when a storm nearly sank the fleet of ships carrying him and his new wife back from Denmark. He claimed that the storm was raised by witches attempting to murder him and he ordered a huge trial in Berwick where most of the accused confessed under torture. Scotland was one of the most active centres of witch hunting, due to James’ obsession.

According to the British Library’s Discovering Literature page Daemonologie ‘asserts James’s full belief in magic and witchcraft, and aims to both prove the existence of such forces and to lay down what sort of trial and punishment these practices merit’. Ideas found in Daemonologie that are also in Macbeth include the witches’ invisible flight, their raising of storms, dancing and chanting, animal familiars and gruesome potions.

It is debated whether Shakespeare’s inclusion of the witches in Macbeth are aimed to appeal to the interests of the King or whether it was a more subversive critique of the monarchy itself.

The Discovery of Witchcraft by Reginald Scot, 1584

The Discovery of Witchcraft is a very different text that aimed to debunk rather than assert popular beliefs about the supernatural. Scot believed in rational, non-magical reasons and thought that stories about fairies were just old wives tales designed to scare children into behaving. Scot claims in Discovery that,

“they have so fraid us with bull beggers, spirits, witches, urchens, elves, hags, fairies, satyrs, pans, faunes, syrens, kit with the can’sticke, tritons, centaurs, dwarfes, giants, imps, calcars, conjurors, nymphes, changlings, incubus, Robin good fellow, the spoorne, the mare, the man in the oke, the hell waine, the fierdrake, the puckle, Tom thombe, hobgobblin, Tom tumbler, boneless, and such other bugs, that we are afraid of our own shadowes.”

In our collections we have a lovely 1930’s limited edition of The Discovery of Withcraft with an introduction by Montague Summers.

His text was widely read and was central to the debate around supernatural beliefs and witchcraft. Scot received numerous challenges to his work including from King James in Daemonologie. It is thought that The Discovery of Witchcraft is another possible source for the witches in Macbeth as well as other supernatural elements found in other Shakespeare’s plays, like the fairies in A Midsummer Night’s Dream. 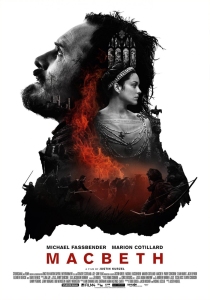 If you would like to find out more and see these books, and others, dating back to the 16th century then we will have some out on display before our film screening of Macbeth, starring Michael Fassbender, on the 28th March. This will take place in the wonderfully atmospheric setting of the Local and Family History department, tickets are only £5 and there will be licensed bar available for you to enjoy.